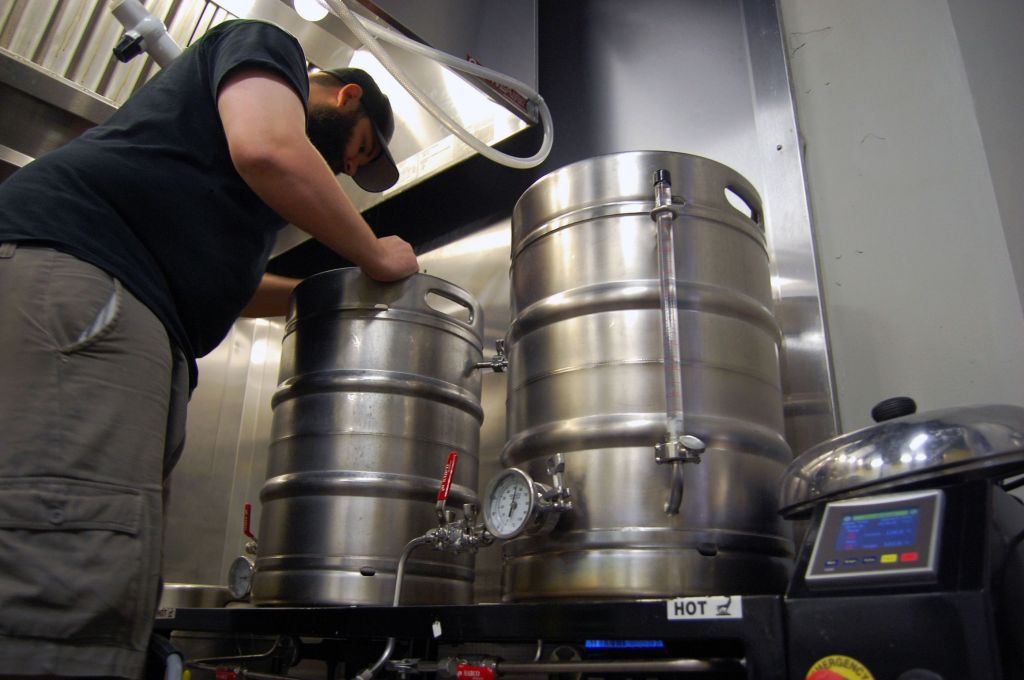 The New Sarum Brewing Company in downtown Salisbury had plenty of success in its first year of business, and now its owners are planning to expand.
The craft brewery started operations near the end of summer in 2013 and focused on creating beers that reflect the history and people of Rowan County, according to Edward Moscardini, whose family owns and operates the brewery located at 117 S. Lee Street next to Salty Caper, which serves craft beers and brick oven pizza. Salty Caper is also owned by the Moscardini family.
“It was a complete success,” Moscardini said about the brewery’s first year. He said that he, his father, Gianni, and brother, Gian, thought it was the right time to open a craft brewery in Salisbury.
The family, along with brewmaster and co-owner Andy Maben, style their beer after the history of the area. The name “New Sarum” is a tribute to Salisbury’s sister city in England, where the original settlement was called “Old Sarum.”
The brewery’s flagship beer, 142, got its name from the number of alcohol licenses issued in Rowan County between 1753 and 1772, Moscardini said.
“We created New Sarum. We’re creating our identity around Salisbury and Rowan County,” he said.
Other beers the brewery makes include High Rock Red and Old Stone House IPA. Edwards said the brewery has developed 12 recipes so far and plans to keep six in continuous production.
New Sarum serves its beers at Salty Caper locations in Salisbury and Mooresville, the Lee Street Theatre, and La Cava restaurant, which the Moscardini family owns.
The family was testing the market during the first year of business, Moscardini said, but the beers have become so popular that the brewery has been unable to keep up with demand.
New Sarum has one full-time employee, the brewmaster.
“It’s been difficult because every beer we produce has sold beyond our expectations,” Moscardini said. The business filled 80 barrels of beer in its first year.
Now, the company is looking to expand its production and become a microbrewery. And that means more space is needed.
An economic impact analysis on New Sarum’s proposed expansion says the company is looking to move into the Tractor Building at 109 N. Lee Street. The building would have to be renovated. The brewery would also need to buy an adjacent lot so the building can be expanded to 7,500 square feet, according to the report.
The analysis says the building would be equipped to brew and bottle beer. The total investment is estimated at $2.2 million. The analysis gives Dec. 31, 2015 as a tentative completion date for renovation and construction.
Ten employees would be needed to run the brewery after the expansion, the analysis says.
The company is looking to receive government incentives for the planned expansion and will present the analysis at Monday’s Rowan County Board of Commissioners meeting and Tuesday’s Salisbury City Council meeting.
Production and consumption of craft beer is on the rise in North Carolina and across the country, according to Margo Knight Metzger, director of the N.C. Craft Brewers Guild.
She said North Carolina is among the top five states in the country for growth in the craft-beer industry. The state has over 100 craft breweries, and the number has quadrupled since 2006, Metzger said. The industry employs 10,000 people and has an annual economic impact of $800 million in the state.
Metzger said a lot of the money is generated from tourism, people from out of state who come to visit North Carolina’s breweries.
“I think people are rediscovering beer or discovering it for the first time and finding all this flavor,” she said, adding that the craft beer movement is tied to the local-food movement. People want to know where their beer comes from and who makes it.
Moscardini said New Sarum’s success is driven by research and feedback from the community.
“We’re brewing the beer for the people of Rowan county,” he said, ““We’re coming up with a quality product.”