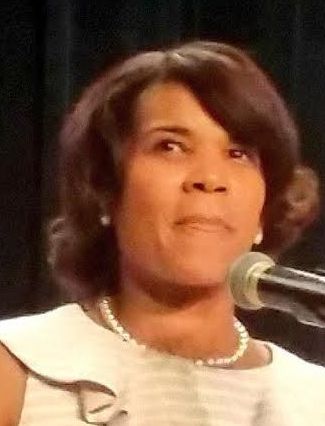 If experience is the best teacher, Kemba Smith is the perfect person to warn young adults about making costly, life-changing mistakes.
As a result of her former relationship with a drug dealer, Smith served six and a half years of a 24˝-year federal prison sentence, was stripped of her voting rights and couldn’t start bonding with her son, Armani, until he was 6.
“I’m here for a reason and that reason is you,” Smith told Livingstone students on Wednesday inside Varick Auditorium. “I don’t believe each and every young person has to make each and every mistake. You need to hear and read about other people’s mistakes so you don’t go down those same bad roads…”
Smith, the only child of upper-middle class parents, flourished in high school before getting accepted into Hampton University, one of the country’s premiere HBCUs. But during her sophomore year she began dating Peter Michael Hall, a nice looking, smooth-talking guy.
Problem is Hall was a major player in a $4 million crack cocaine ring. Before long, Smith was being physically abused by him, was “caught up” in his world and didn’t know how to escape.
She never sold drugs or used them but sometimes delivered money for Hall. In the end she plead guilty to conspiracy to distribute crack cocaine and entered prison seven months pregnant with Hall’s child. Hall was eventually murdered in Seattle.
“When I was your age I got caught up in a lot of things,” Smith said Wednesday. “But what happened to me on Hampton’s campus could have happened to me at Columbia University because it’s not exclusive to HBCUs.”
Smith, a petite woman with a pretty smile, didn’t mince words. She said she considered her nose too big, her legs too skinny and wasn’t crazy about her hair when she got to college.
“I suffered from low self-esteem,” she said. “I’d see (Hall) coming on campus in different cars, guys dapping him up and girls standing around just watching him. I’d heard stories about him going out with lots of girls, but my roommate dated a drug dealer and I’d see her coming to the room with a new Coach bag and her hair and nails done. I remember getting a warm, fuzzy feeling because Peter talked to me.”
Smith knew getting involved with a drug dealer wasn’t smart but fooled herself into believing things would turn out okay.
“Peter shared with me how he didn’t like selling drugs and he wanted to get a legal job,” Smith said. “I thought, ‘well, maybe if I stay with him I can change him.’ ”
Smith implored the students not to forget why they’re in college.
“That’s not your purpose here at Livingstone – to get so deep into a relationship that you can’t get your work done and your studying done,” she said. “Gus and Odessa did not send me to Hampton University for me to convert a drug dealer into a law abiding citizen.”
Smith also warned females against ignoring red flags, saying men who try to isolate women from their family and friends are usually controlling and often abusive. She briefly mentioned Janay Rice, wife of former Baltimore Ravens star running back Ray Rice.
“I believe somebody in this audience is going through it or has a friend who’s going through abuse,” Smith said. “I didn’t tell anybody what I was going through out of embarrassment. Talk to your guidance counselor, Elizabeth Alston-Pinckney, or somebody. Don’t feel like you have to do it all alone.”
Smith said she prays for Janay Rice. She also prays for other first-time, non-violent offenders who receive stiff prison sentences. She knows had it not been for determined parents who fought for her, articles about her plight like the one in Emerge magazine, help from the NAACP Legal Defense Fund and widespread national support, President Clinton likely wouldn’t have granted her clemency in December 2000.
“I left hundreds of Kemba Smiths behind in federal prison,” she said. “Two of the women I was in prison with had never been in trouble before. They were given life sentences and as of today have already served 20 years.”
Smith told the male students not to waste their time at Livingstone if they’re going to return home and get caught up with neighborhood friends who sell drugs, saying doing so would jeopardize their futures and the resources that have been invested in them.
“I never handled, used or sold any of the drugs involved in the conspiracy, but you can be guilty by association,” she warned.
Livingstone President Dr. Jimmy R. Jenkins, Sr. commended Smith for her candor and profound message.
“What she said this morning is what I’ve been saying all along,” Jenkins said. “It’s the little decisions you make that bring about big results. If you make little good decisions, you’ll have big good results, but if you make little bad decisions, you’ll have big bad results.”
Today, Smith tours the country sharing her story and promoting her book, “Poster Child”. She has a close relationship with her son, a Washington and Lee University student who performs well academically and has studied abroad in Oxford, England, and France. And in 2009 she married Patrick Pradia, with whom she has a 4-year-old daughter named Phoenix.
Smith said a promise to God while she was imprisoned is the driving force behind her speaking out – that and it’s the right thing to do.
During a book signing after her speech, she shared a poignant story about the first night she spent with her son after she was freed from prison in Danbury, Conn., and she admitted knowing she faces a major hurdle in deciding when to tell her daughter about her past.