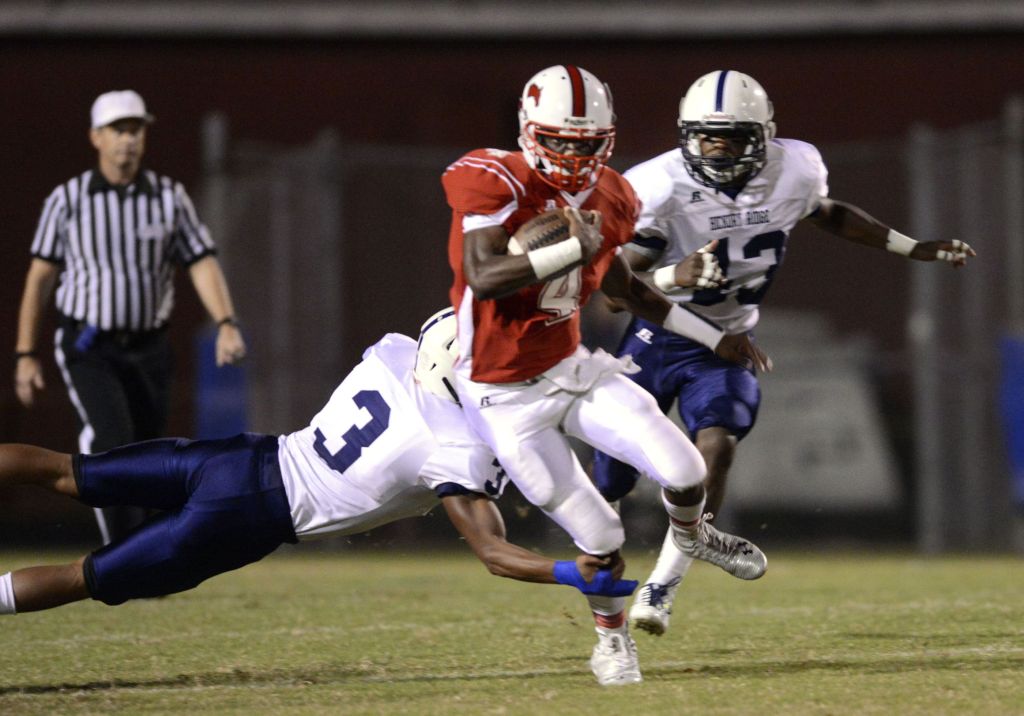 GRANITE QUARRY — East Rowan and Hickory Ridge combined for almost 1,000 yards of offense Friday night with multiple swings in momentum. In the end, the Ragin’ Bulls used explosive big plays by elusive quarterback Greg Waslo, to secure the key 49-35 South Piedmont Conference win.
Waslo ran for four touchdowns and passed for another as the Ragin’ Bulls (6-1, 3-1) rallied from behind midway in the third quarter to pull away from the Mustangs. It was the third loss in a row for East Rowan (2-4, 1-3). The Mustangs played the top two teams — Concord and Hickory Ridge — in the league the past two weeks and kept it close.
“We have turned it around and we are a better football team than we were three weeks ago, “ East Rowan coach Kenneth McClamrock said. “But we have got to finish one and play the full four quarters. The effort was there tonight on offense and defense.”
The Mustangs fell behind 14-0 midway through the first quarter but turned the tide with aggressive defense, the running of Max Wall and the passing of Samuel Wyrick.
Short TD runs by Jake Boltz and Tre Gillespie tied the game at 14-14 early in the second period. Waslo made it 21-14 on a seven-yard keeper, but East tied it again just before halftime with an 85-yard drive, capped by Wyrick’s 12-yard TD pass to Wall.
East got an interception from Willie McCree just before the half then another by Wesley Porter to open the second half. That set the stage for a 10 play drive to put East ahead for the first time, 28-21. Wall chewed up yards on the drive then Jake Boltz scored from the three yards out for the lead.
As a sign of things to come, Hickory Ridge needed only two plays for the equalizer as halfback Jaylen Rudisell broke three tackles and sprinted 55 yards for the score. It was Rudisell’s second TD and was part of a 226- yard performance.
The Bulls forced a punt then took the lead for good with 2:28 left in the third. Waslo converted a third-and-11 with a 16-yard scramble then swept off the right end for a 15-yard TD to make it 35-28.
East notched its third interception of the game, this one by Tay Davis, to stop another drive then a fumble recovery by McCree halted another threat.
But the Bulls seemingly iced it with 5:03 to play when Waslo scrambled from seven yards to make the score 42-28. East responded with a Wyrick to Chandler Smith TD pass of 24 yards with 3:50 left, and the Mustangs had hope.
But that hope was quickly dashed by Waslo as he broke off right tackle and cut back to cover 53 yards for a 49-35 lead. He finished with 178 yards rushing to go with 115 passing as his team racked up 552 total yards.
“We got exactly what we expected tonight (from East Rowan),” Bulls coach Marty Paxton stated, “They are very talented. But Waslo tonight played tremendously for us. He made the big plays when we had to have them. “
East had a number of superlative performances as well. Wyrick passed for 236 yards and two TDs while Wall racked up 153 yards on 26 carries.
“We wanted to emphasize the running game tonight,” McClamrock said. “And Max really came through for us.”
East had 396 yards of total offense.
McCree had a stellar night for the Mustang defense with 10 tackles, an interception and a fumble recovery.
“I think as a team we just didn’t contain our spots well enough tonight,” McCree said, “but we are getting better everyday and we will work on it.”
The Mustangs are at home next week against Northwest Cabarrus.