Can Blue Bears make it 5? 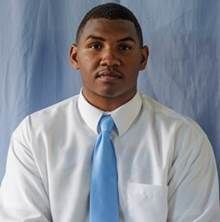 SALISBURY — The math isn’t hard to do. Livingstone is playing a 10-game football schedule and heads into Week 5 still undefeated.
If the Blue Bears can win their 1 p.m. game at Elizabeth City State’s Roebuck Stadium on Saturday, the worst they can finish is .500.
“If we win, it’s guaranteed that we won’t have a losing season,” head coach Daryl Williams said. “That hasn’t happened here in a long time, but we’re still not talking about wins. What we talk about is doing things right. If we do things right, wins take care of themselves.”
The schedule maker has been Livingstone’s best buddy, as Livingstone’s list of victims is a combined 0-16. Still, Livingstone has every right to be excited about being 4-0 overall, 1-0 in the CIAA and 2-0 at home.
Out of all of the dozens of HBCUs, Livingstone is the only one that is still unbeaten. That’s a point of emphasis for Williams and the Blue Bears.
“I share things like that with the team,” Williams said. “I share where we are in the polls. It’s something to be proud of.”
Livingstone is ranked 10th this week in the Sheridan Poll — a poll that includes all the historically black schools, including the FCS programs in the MEAC and SWAC.
Livingstone remains second in the Onnidan Poll for Division II schools. The Blue Bears are still ranked behind Winston-Salem State in that poll, but they got two first-place votes this week.
The Blue Bears won last Saturday on a last-second field goal that beat Bowie State 36-33, and two of their other wins were tight. Williams understands the Blue Bears have been fortunate so far. He’s fully aware his team has to get better before the opposition gets tougher.
“We took a step in the right direction against Bowie, but we’ve got things to work on,” he said. “We’re working on punt returns, working on ball security, working on tackling better.”
Livingstone has been doing a few things right. Livingstone’s QB Drew Powell has won the CIAA Quarterback of the Week Award three times already and is good for about four TDs every Saturday. Other positives last week included improved play by the offensive line and a defense came up with three turnovers.
“Our defense has given up some yards and points and you’d like to do better at those things, but the thing that matters about our defense is that every time we’ve had to have a stop, they’ve gotten it,” Williams said.
In Elizabeth City State, the Blue Bears won’t be facing a powerhouse, but the Vikings will be the first team Livingstone has faced this season that has tasted victory. The Vikings (1-3) beat Tusculum, an SAC team, in Week 2 and is 1-0 at home.
Livingstone made the long trip northeast to Elizabeth City on Friday. It’s five hours by car and longer by bus to a venue that’s on the coast just south of the Virginia line.
The Vikings smashed the Blue Bears 49-7 in 2011 the last time the schools met, but this one — despite the Blue Bears being picked to finish 11th in the 12-team CIAA — should be much tighter.
“We’ve got all hands on deck,” Williams said. “We’re 4-0, but we haven’t forgotten where we were picked in the preseason. We’re going to play like underdogs — with a chip on our shoulder.”
Follow Mike London on Twitter at @mikelondonpost3.