Wineka column: Visually impaired vets have picnic at park named for one of their own 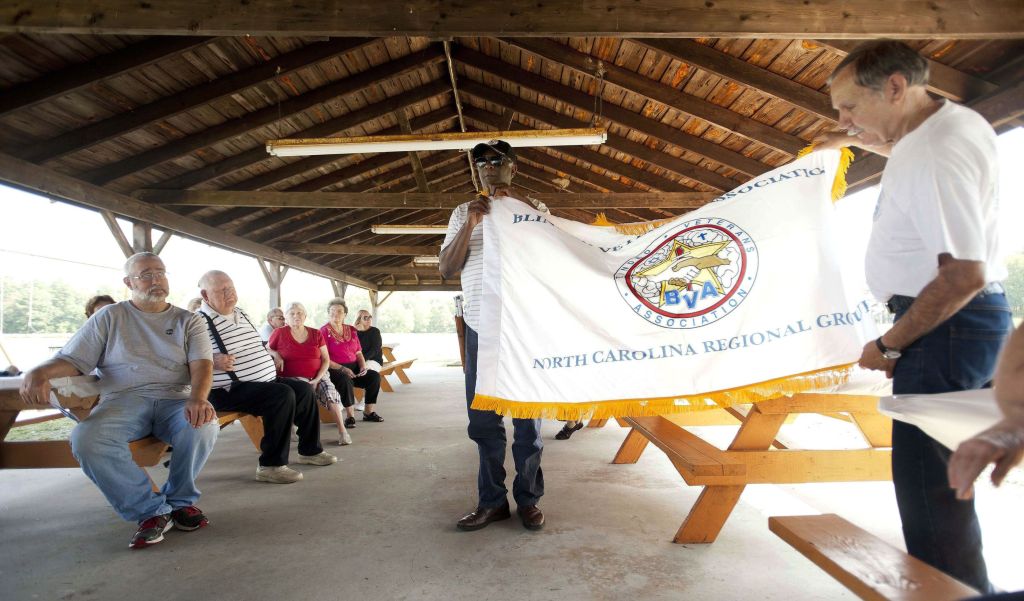 GOLD HILL — During World War II, young Ben Ketchie and Ben Brown were among about a dozen guys from Rowan County who found themselves in Guam.

They both were in the Navy. Among other duties, Ketchie was guarding Japanese prisoners. Brown was working on a repair ship — “repairing everything that got beat up,” he said.

Every Sunday the group from Rowan County would try to get together, so it was fitting — some 70 years later — that Ketchie and Brown were sitting across from each other Thursday at a picnic table.

They were having lunch under a shelter at Carolina Stalite Co.’s Ben Ketchie Park, named for the former plant superintendent back in 1989.

Ketchie pretty much built this private park, meant to be enjoyed by Carolina Stalite employees and their families. The shelter, swings, lake, playground, grills, trees — everything was there because of Ketchie, who celebrates his 88th birthday today.

Last year, when members of the Southern Piedmont Chapter of the Blinded Veterans Association talked about having a picnic for one of their monthly meetings, Ketchie spoke up.

“I said, ‘I got a place down there in Gold Hill I think I can get a hold of,’” said Ketchie, who personally suffers from macular degeneration.

So for the second year in a row, Carolina Stalite served as host for the BVA chapter on one of the prettier tracts of land in eastern Rowan County. About 30 people total attended, including BVA members, caregivers and service providers.

The group usually meets for lunch on the first Thursday of each month at the Golden Corral in Concord.

The BVA has about 11,000 members nationwide and is an organization of blinded veterans helping blinded veterans. To belong, you have to be a veteran who is totally blind or legally blind, Eller said. The national membership is only $15 a year, and chapter membership costs nothing.

All legally blind veterans are eligible for BVA’s assistance whether their visual impairment comes during or after their active service in the military.

Eller said Rowan County’s transit agency provides transportation to chapter meetings for only $4 a person. Gene McCorkle drives the van, and “we consider him being part of us,” Eller said.

About 19 years ago, Eller first noticed a change in his eyesight, starting with the right eye, then nine months, the left eye.

Doctors determined he had a disorder called angioid streaks, a retinal condition characterized by breaks and cracks in Bruch’s membrane.

With the condition, Bruch’s membrane can thicken, calcify and begin to crack, and those cracks appear as thick, brown or grayish lines radiating from the area around the optic nerve.

Looking at a person close to him, Eller says he can see the man’s cap and much of his figure from the shoulders down, but there’s a blacked out area in the center part of his vision.

He relies on a special magnifier for reading and, of course, he can’t drive.

Eller, 51 when his eyesight started fading, said he lost his driver’s license and his job at Ketchie Marble in Rockwell. He fell into depression.

“It’s traumatic when you lose your eyesight, even part of it,” he said. “What do I do? I felt like life had just pulled a rug out from under me.”

Eller said he found assistance that turned his life around at a special VA eye clinic in Augusta, Ga.

Through the Veterans Administration, Hedrick puts visually impaired veterans in touch with people, services, devices and training that can help them overcome the effects of vision loss.

When she’s in Rowan County, Griffin works out of the Department of Social Services building in Salisbury. The visually impaired face many challenges, but one of the biggest always is getting from place to place.

Vernon Richmond, president of the N.C. Regional Group of the BVA, also attended Thursday’s picnic. Richmond, who lives in Alamance County, brought with him a newly designed state flag for the BVA, and he hopes to get one to each chapter.

In appreciation of Stalite’s hosting of the picnic, the BVA chapter presented company officials with a mahogany bowl hand-crafted by member Charlie Breese of Concord.

A Vietnam-era veteran, Breese deals daily with an optic nerve problem. Whether it is service-related or not has “yet to be determined,” Breese said.

“They can’t seem to find anything to blame it on,” he added.

It was only about three years ago that Ben Ketchie finally retired from Carolina Stalite. He tried to retire when he was 65, but the company gave him some incentives to stay, and he worked just two months shy of an additional 20 years.

Ketchie had good things to say about the BVA and Hedrick, who works through the VA Medical Center.

“It’s kindly a puzzle to try to get through the system up there,” Ketchie said. “They really help you out if you need information, They’ll run it down for you.”

While Ketchie fashioned a long career with Carolina Stalite, Ben Brown returned to Rowan County after World War II and built a landscaping and nursery business over 60-plus years. He’s now 91.

Both Ketchie and Brown attended the old Rockwell School.

As they ate lunch Thursday, a slight breeze pushed through the shelter, and over the lake, an osprey circled the water, looking to snack on fish.

“It’s grown into a pretty good thing,” Ben Ketchie said of the park named for him.

And so has the BVA.