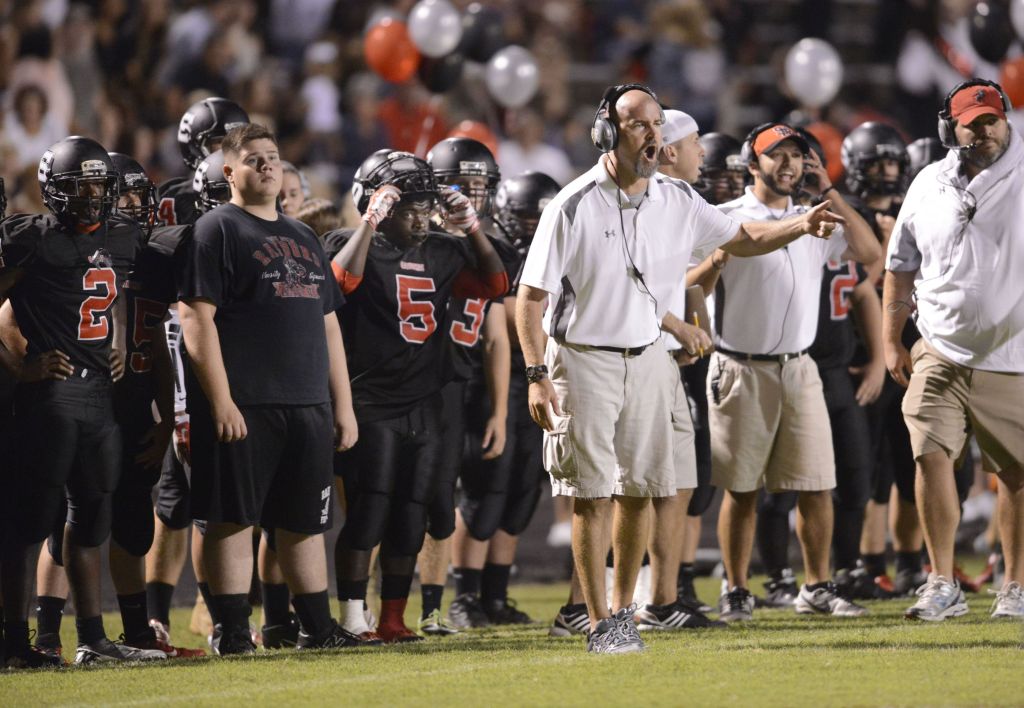 Guys get hurt playing football, but injuries have hit Rowan County schools much harder than usual this season. North Rowan, East Rowan and West Rowan have been wounded the most, while South Rowan has played for weeks without its starting quarterback. Davie County was minus two of its most talented players for several games, but the War Eagles welcomed them back last week.
It’s a Friday that finds North Rowan resting and healing bruises, while Salisbury played on Thursday because of weather concerns.
Davie has a tough home game against a North Davidson team that has been scary, while A.L. Brown is perceived as the underdog in the Mecka against a talented Vance squad.
As far as the county’s SPC teams, the headliner is Carson at West Rowan, a game that shapes up as pivotal for both programs. South Rowan is at Cox Mill, seeking revenge for one that got away a year ago, while East Rowan is a home underdog against Hickory Ridge.

Carson (2-3, 1-1 SPC) at West Rowan (4-1, 2-0 SPC)
In the SPC, Carson lost to Central Cabarrus at home and won at home against East Rowan. West Rowan owns road victories against Northwest Cabarrus and South Rowan. The Falcons haven’t played a home game since Sept. 5, so fans will be excited in Mount Ulla.
Carson finally beat the Falcons for the first time last season, while Carson’s Joe Pinyan won for the first time against West Rowan’s Scott Young in a matchup of two of the most successful coaches in county history.
The 2013 Carson-West Rowan game is remembered mostly for four interceptions by Carson that led to the Cougars’ 28-21 victory. Those picks were thrown by West Rowan’s Harrison Baucom, who has made a successful transition to tailback (741 rushing yards) and has carried the Falcons’ offense as a senior.
Carson halfbacks Brandon Sloop and Darren Isom are both getting 100-plus yards every Friday behind a good offensive line and have combined for 1,222 rushing yards. The ground-and-pound Cougars average over 300 rushing yards per game.
While Carson has the more efficient offense, the Falcons have the superior defense. West Rowan has allowed just 20 points the last three weeks combined, although none of the teams had Carson’s backfield talent.
West Rowan leads the all-time series 7-1.
A breakout game by either of the junior QBs, West Rowan’s Kacey Otto or Carson’s Andy Lear, would make his team a winner.

Hickory Ridge (5-1, 2-1 SPC) at East Rowan (2-3, 1-2 SPC)
Samuel and Seth Wyrick continue to put up record-breaking and record-challenging numbers, but the Mustangs still need to find a way to win SPC games.
East Rowan managed to outscore Cox Mill, but it has lost league games to Carson and Concord.
Hickory Ridge has been the SPC’s biggest surprise after going 3-5 and being part of a four-way tie for fifth in the league a year ago. The Ragin’ Bulls went down to the wire in a loss to SPC favorite Concord, annihilated Cox Mill and beat Central Cabarrus.
Hickory Ridge has done most of its damage at home, where it is 4-0.
East Rowan’s defense has allowed at least 28 points in every game and three opponents have scored more than 40. Hickory Ridge looks like a great bet to score 30 — and maybe 40. Nate Mullen, a Charlotte commit, is one of the league’s special players as a runner, receiver and returner.
Hickory Ridge beat the Mustangs 35-21 last year with East Rowan getting 113 yards in penalties and Mullen getting 135 rushing yards.
Hickory Ridge leads the all-time series 4-1, with the Mustangs winning in 2009.

South Rowan (2-3, 1-2 SPC at Cox Mill (2-4, 1-2 SPC)
South Rowan receiver Alex Stewart will be playing against his father Craig, Cox Mill’s head coach.
The winner of this game can still think realistically about the 3A playoffs. The loser probably is headed for a short season.
It’s not hard to find good things to say about South Rowan, which has gone from setting records for defensive futility in 2013 to leading the county’s defensive stats this season.
South Rowan already has won two more games than it was expected to win and has a chance to log victory No. 3 tonight if it can generate some offense.
The Raiders are last in the county offensive stats, but the running game showed signs of life in last week’s 21-13 loss to West Rowan, and Cox Mill usually allows opponents to gain chunks of yards on the ground.
Cox Mill has allowed 60-plus points twice this season. The Chargers normally employ a fast-paced, no-huddle offense and generally plays wild games.
Both of Cox Mill’s wins have come at home.
The Chargers rallied late to beat South Rowan 45-36 a year ago in the first meeting of the schools.

Vance (4-1, 1-0 Mecka) at A.L. Brown (3-2, 1-0 Mecka)
A.L. Brown coaches marveled at Vance’s young talent and speed a year ago, and now the Cougars are a year older and under new management.
The Wonders believe Vance has the best quarterback-running back combination they’ve seen this year. That’s saying something because the Wonders have played Concord.
A.L. Brown beat Vance 55-40 a year ago. Sandon McCoy’s three TDs were instrumental in that victory, and he’s still running over people. He has 480 rushing yards.
MaxPreps rates both teams among the state’s best, with Vance No. 20 and the Wonders No. 39.
Vance’s loss — 42-37 on the road at powerhouse Richmond County — enhanced its power rating as much as its four victories. One of those victories came against perennial South Carolina power Rock Hill South Pointe.
Both teams took care of business in Mecka openers, with the Wonders beating North Mecklenburg and Vance steamrolling Robinson.

North Davidson (6-0, 1-0 CPC) at Davie County (4-2, 0-1 CPC)
Still unranked in the AP state poll, North Davidson cruised through the non-conference portion of its schedule as it usually does, but then it really opened eyes last week with a 48-7 breeze against Mount Tabor in a CPC opener.
Davie has scored at least 31 points in every game, but Reagan took advantage of its defensive shortcomings last week. Reagan had more than 400 passing yards and beat the War Eagles 58-31.
Two North Davidson QBs combined for 23 completions and five TD passes against Mount Tabor, so the War Eagles will have their hands full again.
North Davidson defensive end Shy Tuttle, a Tennessee commit, is considered one of the state’s best prospects.
Follow Mike London on Twitter at @mikelondonpost3.