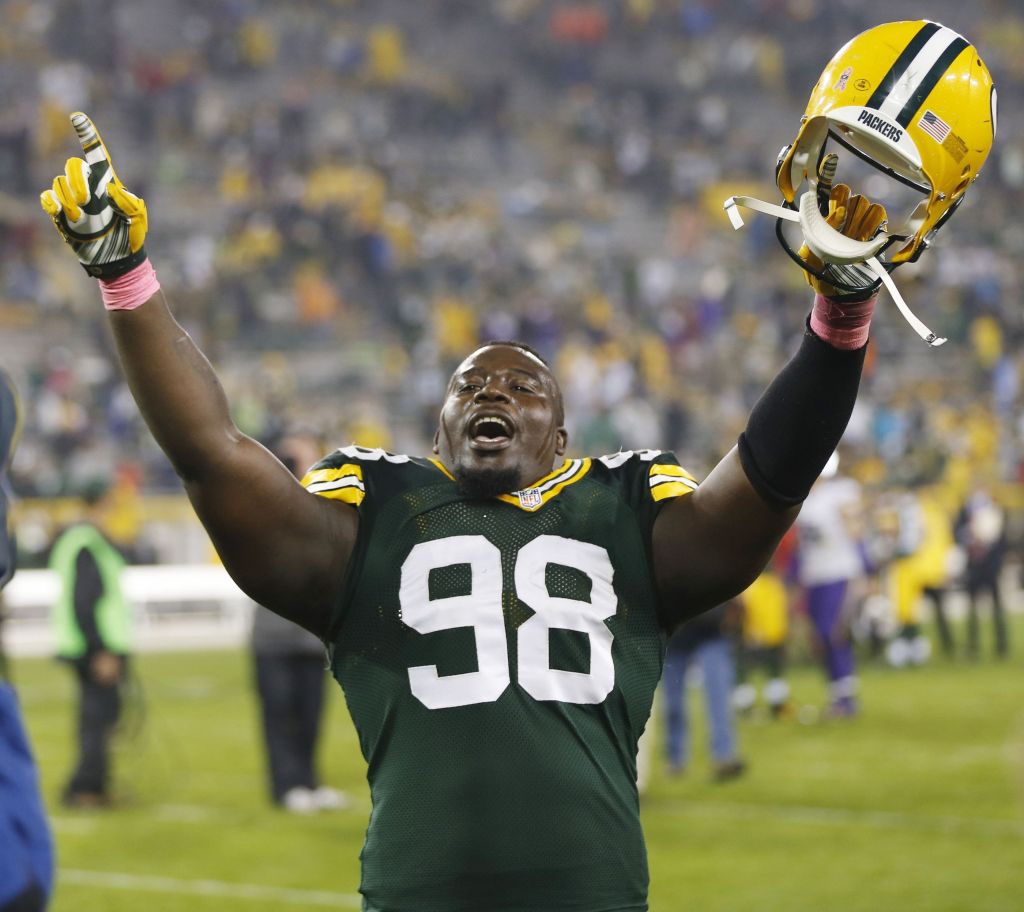 GREEN BAY, Wis. — Julius Peppers crossed the goal line and caught his breath.
But his work wasn’t done after returning an interception 49 yards for a touchdown. Teammate Morgan Burnett pointed to the stands — time for Peppers’ first Lambeau Leap.
One of many for the Packers on Thursday night.
Aaron Rodgers threw for three scores, and Eddie Lacy ran for a season-high 105 yards and two touchdowns in the 42-10 rout of the Minnesota Vikings.
Jordy Nelson hauled in a 66-yard touchdown catch. Things were going so well in Green Bay that even Peppers found his way to the end zone through the mist.
But something was missing.
“‘(Burnett)”just said, ‘Go, go, go, go!”’ Peppers recounted.
This is all new to Peppers after joining the Packers in the offseason as a free agent.
“It was actually pretty tough to get up there. I was pretty tired after that run, so I barely got up there,” Peppers said. “It was tough.”
The Vikings had it much worse.
The Packers led 28-0 after the first half played in a light rain. They essentially toyed with Minnesota the rest of the way.
“Green Bay outplayed us,” Vikings coach Mike Zimmer said. “They were more physical than we were. They did a much better job all night.”
Peppers had the highlight-reel play in the second quarter after picking off a pass over the middle from Christian Ponder, who was hit by tackle Luther Robinson as he released the throw.
The 34-year-old Peppers veered left across the field and waited for blocks before striding the final 10 yards along the sideline to make it 21-0 with 7:06 left in the second quarter.
Peppers became the first player in NFL history with 100 sacks and 10 interceptions.
“I like the way it went tonight,” Packers coach Mike McCarthy said. “Yeah, I’ll take this.”
Ponder struggled in getting the start at quarterback with rookie Teddy Bridgewater out with a sprained left ankle.
Jamari Lattimore intercepted Ponder’s pass over the middle on Minnesota’s drive after the Peppers’ touchdown, setting up Rodgers’ 11-yard scoring pass to Davante Adams to give Green Bay a four-touchdown lead with 4:55 left in the first half.
That was Rodgers’ 200th career touchdown — though he let Adams’ keep the ball in honor of his first career score.
“I’m very proud of Aaron,” McCarthy said. “It seems like he’s in the point of his career now where every week or every other week he’s breaking a record.”
The rest of the game was a mere formality. Fans took delight in showering former Green Bay receiver Greg Jennings with boos whenever he touched the ball.
Jennings finished with two catches for 31 yards.
Rodgers was 12 of 17 for 156 yards — and the offense wasn’t really at its best. There were several three-and-outs sprinkled among the touchdown drives.
But after a short week to get ready for a Thursday night game, the Packers will surely relish this win over a long weekend.
On the touchdown to Nelson, Rodgers found the NFL’s leading receiver on play-action. Nelson caught the pass stride at the 20 and easily outraced safety Harrison Smith into end zone for the Packers’ second touchdown.
Rodgers also connected with Randall Cobb for an 8-yard touchdown pass set up by three straight long runs by Lacy. Cobb scored his league-leading sixth touchdown of the season.
The Packers’ struggling running game also got back on track, with Lacy running for touchdowns on back-to-back drives in the third quarter. He barreled over safety Robert Blanton into the end zone on his second score, from 10 yards out.
“Eddie, you know, he’s going to be a guy who’s just going to be continuing to lay on people and to be more of a force as the weather continues to turn here,” Rodgers said.
In contrast, Minnesota rarely advanced past midfield. Its only venture across the 50 in the first half ended with Burnett forcing Matt Asiata to fumble after an 11-yard run, and Casey Hayward recovered the Vikings’ third consecutive turnover.
Under pressure much of the night, Minnesota could rarely get anything going through the air until late with the game well in hand. Ponder was 22 of 44 for 222 yards.
Green Bay finished with six sacks, including 1 1/2 apiece for Mike Daniels and former Viking Letroy Guion.
The Vikings finally broke the shutout on Ponder’s 6-yard touchdown run on the first play of the fourth quarter. But they still trailed 42-7.
“Playing like that, you don’t have much to say. It was embarrassing. That’s not the way I expected to come out and play,” Ponder said.
Minnesota had the most notable injury when receiver Cordarelle Patterson left with a hip injury early in the third quarter after making a 6-yard catch. For Green Bay, defensive lineman Datone Jones left in the second quarter with an ankle injury.
———
AP NFL websites: www.pro32.ap.org and www.twitter.com/AP—NFL