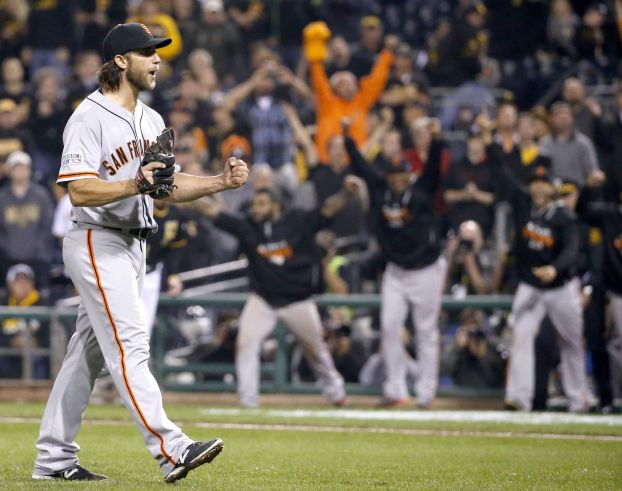 WASHINGTON (AP) — The San Francisco Giants and Washington Nationals both missed the postseason last year. That’s pretty much where the similarities end heading into Friday’s NL Division Series opener.
Bruce Bochy has managed the Giants to two of the past four World Series championships. Nationals skipper Matt Williams is about to lead a team in the playoffs for the first time.
The Giants have won eight consecutive postseason games, including an 8-0 wild-card victory at Pittsburgh on Wednesday night.
The NL East champion Nationals, most of whom have never won a playoff series, spent Wednesday at their home ballpark playing an intrasquad scrimmage between groups they dubbed “The Face-Eaters” — a reference to Jayson Werth’s 2013 comment about showing up for a game “ready to eat somebody’s face” — and “Team Alpha.”
It was dressed up to look and sound like the real thing: Fake crowd noise was piped in; videos were shown on the scoreboard; the game-day PA announcer introduced players; rookie reliever Aaron Barrett even sang the national anthem.
“All in all, it was good camaraderie and good competition and got the juices flowing a little bit, which is what was needed,” reliever Tyler Clippard said, referring to the four-day break the Nationals will have had between Sunday’s regular-season finale and the series start. “It was a game situation. We in this clubhouse are very competitive people, and want to beat each other just as bad as we want to beat everybody else.”
First baseman Adam LaRoche joked the Giants’ “confidence is up” because of their win against the Pirates, “but we just had a big intrasquad yesterday, so our confidence is up, too.”
Both teams worked out at Nationals Park on Thursday, and both managers announced their starting pitchers for Games 1-3.
Friday’s matchup between Washington’s Stephen Strasburg and San Francisco’s Jake Peavy — pals who sometimes work out together in San Diego — gives one indication of the gap in experience the series represents. Strasburg, held out of the 2012 postseason to protect his surgically repaired elbow, will be making his playoff debut; Peavy will be making his sixth October start, including as a member of last season’s World Series champion Boston Red Sox.
Their catchers are also illustrate the difference between the teams: Strasburg will be throwing to Wilson Ramos, who was injured in 2012 and never has participated in a playoff game; Peavy will work with Buster Posey, a member of the Giants’ 2010 and 2012 title teams, along with the 2012 NL MVP winner.
Game 2 will feature Jordan Zimmermann against Tim Hudson, and Game 3 will have Doug Fister against Madison Bumgarner, who threw a four-hit shutout against Pittsburgh in San Francisco’s seventh consecutive victory in an elimination game.
“Once we get to the postseason, it’s like a new season for us,” said Giants shortstop Brandon Crawford, who hit a grand slam Wednesday. “We have plenty of ups and downs during the regular season, but now it’s kind of a new slate for us.”
The Giants finished second in the NL West at 88-74 after going only 41-40 in the second half. Washington went 53-28 in that span, and a majors-best 21-9 in its last 30, to finish 96-66, the NL’s best record.
“We may not match up with a lot of people on paper,” Hudson said. “But I think once you get out there and play, the guts and the heart that this team has … gets this team over the hump a lot of times.”
What the Nationals insisted Thursday is that their trip to the playoffs in 2012 — which ended with a gut-punch loss in Game 5 of their NLDS against St. Louis — provided plenty of know-how.
“We kind of know what to expect a little bit more now,” said Ryan Zimmerman, whose injured right leg seemed fine Thursday as he put in work in left field. “We went into ‘12 not really knowing what to expect and thinking that everything would be the same. And it’s not the same. … Every pitch is so much more intense. It’s just a different feel.”
Something the Giants know well.
“They have a similar-type club that we have. … Guys not necessarily that are the best players, but they play well together, which is good. We do the same exact thing,” Clippard said, “and I think, you know, we’re the better club.”
———
Follow Howard Fendrich on Twitter at http://twitter.com/HowardFendrich