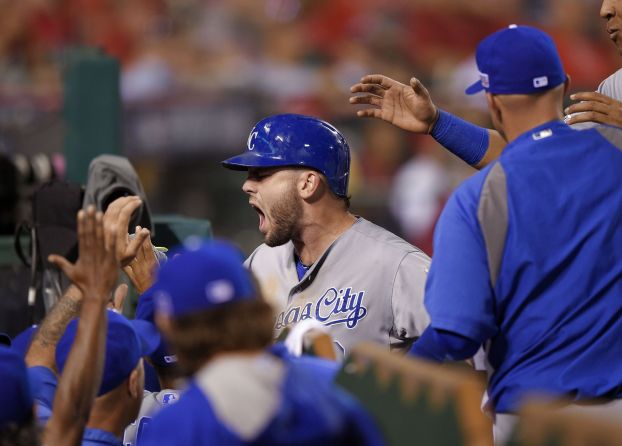 ANAHEIM, Calif. (AP) — Mike Trout couldn’t get a hit in his playoff debut for the Los Angeles Angels, even with two extra innings to do it.
Albert Pujols, Josh Hamilton, Howie Kendrick and Erick Aybar also went 0-fer as the majors’ most productive offense managed only four hits in its postseason opener.
Although the Angels won too many games this season to panic after their 3-2 loss to Kansas City on Thursday night in the AL Division Series, they realize their chances in a shortened series became slimmer after they failed to come through in an 11-inning defeat.
“No one in here is pushing the panic button,” said Angels catcher Chris Iannetta, who homered in his first playoff at-bat. “If anyone else is out there, go ahead. But we’re not. They won tonight, but we’ll go out there (Friday) and see what happens.”
Mike Moustakas homered leading off the 11th, and the Royals kept rolling in their first postseason since 1985.
David Freese also homered early in the Angels’ first playoff game since 2009, but they stranded eight runners in the five innings before Moustakas’ big drive to right and Royals closer Greg Holland’s perfect 11th.
While Jered Weaver and the Angels’ relievers performed admirably, their hitters went 4 for 35 against former teammate Jason Vargas and the Royals’ vaunted bullpen.
“It happens,” said Kendrick, who went 0 for 5 as the Angels’ cleanup hitter. “I can’t speak for Albert. I can’t speak for Trout. We had some pitches to hit and missed them. I missed my share of pitches tonight. I drove one ball, but Aoki made a great play on it.”
Indeed, Nori Aoki made dramatically awkward catches on the right-field warning track to end the sixth and seventh, twice making up for poor routes to the Angels’ drives with a last-instant stab. Lorenzo Cain also made two exceptional plays in center field in the first two innings, underlining Kansas City’s stellar defense.
The Royals can’t match Los Angeles’ lineup on paper, but they’ve got some remarkable postseason mojo.
“This is the type of game that we play,” Kansas City manager Ned Yost said. “We don’t score a bunch of runs … so we have a lot of confidence in our pitching.”
Game 2 in the best-of-five series is Friday night at the Big A, with Angels 16-game winner Matt Shoemaker taking on fellow rookie Yordano Ventura.
Trout was 0 for 4 with a walk in his October debut, and the favorite for AL MVP grounded into a fielder’s choice in the 10th before Pujols popped out to end his 0-for-4 Angels playoff debut. Hamilton popped up to end the game, capping his 0-for-5 return to the lineup.
“We had some guys in scoring position, just couldn’t get that one hit, especially late,” Angels manager Mike Scioscia said. “Those guys hung in there and got the big outs and got the big hit late. So we hit two home runs to keep ourselves in the game, but outside of that, we didn’t really pressure those guys very much.”
Kansas City had managed just two baserunners since the fifth inning when Moustakas hit the first extra-inning homer in postseason history for the Royals, a high shot off Fernando Salas that barely reached the elevated right-field stands at Angel Stadium.
“It’s probably the biggest one I’ve ever hit so far,” said Moustakas, who had dozens of friends and family members in the Royals’ tiny cheering section. “It felt really amazing.”
Alcides Escobar had an early RBI double for the Royals in their first game since that spectacular, 12-inning comeback victory over Oakland in the wild-card playoff.
Winning pitcher Danny Duffy worked the 10th.
Weaver, Joe Smith and Huston Street combined to retire Kansas City’s final 15 batters before extra innings — and that’s when the Royals went to work. Kevin Jepsen let two runners on in the 10th, but retired Salvador Perez and Omar Infante to escape.
Salas wasn’t as lucky, giving up a homer to a third baseman who grew up in the San Fernando Valley before making his big league debut and hitting his first homer in Anaheim three years ago.
A raucous crowd banged balloons and cheered on the Angels throughout their postseason return after a half-decade away, but the fans got tense while the teams managed just three hits apiece in the first nine innings. Los Angeles earned home-field advantage throughout the postseason with a big league-best 98-64 record.
Weaver yielded three hits over seven strong innings for the Angels while Jason Vargas, his good friend and Long Beach State teammate, pitched six innings of three-hit ball for Kansas City.
TRAINER’S ROOM
Royals: RHP Kelvin Herrera walked Freese on five pitches leading off the seventh and then left the game with right forearm tightness. Herrera, a key member of Kansas City’s vaunted bullpen, will be re-evaluated Friday.
Angels: Hamilton played left field and batted seventh after missing 21 of the Angels’ final 22 regular-season games with upper-body injuries.
UP NEXT
Shoemaker (16-4, 3.04 ERA), the 28-year-old rookie who gets credit from Scioscia for saving the Angels’ season, makes his playoff debut. He hasn’t pitched since Sept. 15, when he strained an oblique muscle. Kansas City counters with Ventura (14-10, 3.20), who struggled in the sixth inning of the wild-card game, but possesses a 100 mph fastball.