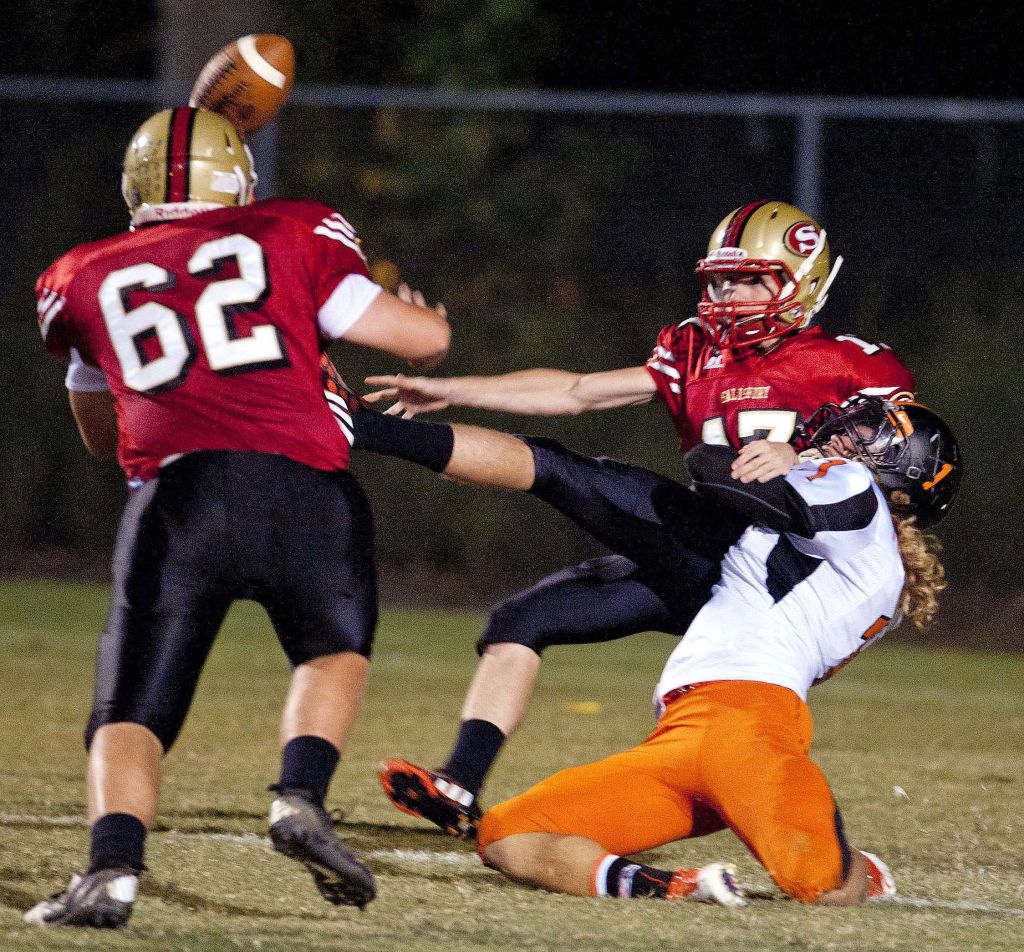 SALISBURY — Salisbury’s special teams didn’t have to be special on Thursday, they just had to be decent.
But they weren’t. Four special-teams disasters train-wrecked the Hornets, and they fell 33-14 to visiting Southeast Guilford.
Salisbury (1-5) handed the 4A Falcons (5-1) two TDs on failed punt attempts and also offered them short fields with a punt-return miscue and a failure to pounce on SEG’s onside kick to start the second half.
It would be a stretch to say Salisbury would’ve won the game without those special-teams bloopers, but it would’ve been interesting.
Antwond Glenn and Willie Clark scored a TD apiece for the Hornets, and both picked up 101 rushing yards. Clark carried 12 times, while Glenn had 11 rushes. Neither of them had a negative carry.
“I thought our defense played well enough to win and our offense did enough to keep it close,” Salisbury coach Ryan Crowder said. “But special teams really cost us. If special teams were a wash, it was a game we could’ve won.”
It wasn’t a game the Hornets were supposed to have a chance to win. They surprised themselves a little bit with how fiercely Glenn and Clark ran the ball, and how well Hornets defenders stood up to the Falcons’ power running game.
“Just about everyone we’ve played has tried to spread us out, but this was team with a unique offense and they came straight at us,” Crowder said. “That’s a tough adjustment for a defense to make, but our guys stood in there well.”
Southeast Guilford crushed Salisbury 44-0 a year ago.
“They just blew us off the field last year,” Glenn said. “But we’re a lot better now than we were last year. If we hadn’t made those mistakes, we could’ve won tonight.”
Salisbury lost two fumbles in addition to those special-teams accidents, so the Hornets turned it over six times. That’s devastating.
“We got stops and we moved the ball, but we just couldn’t overcome the turnovers,” Crowder said.
Salisbury’s defense held the visitors on their first two possessions, but when Salisbury tried to punt on fourth-and-4 from its 25, the snap sailed over Riley Myers’ head to the Salisbury end zone. Myers tried to kick the ball out of the end zone — it would’ve been a safety instead of a touchdown — but he was unsuccessful. Southeast Guilford’s Blythe Hall recovered, and the visitors led 6-0.
It was 12-0 at halftime after Salisbury’s return team made contact with the ball on a punt but failed to secure it.
And so it went. Clark, the fullback, powered through defenders, and then outran them, for a 31-yard score in the third quarter that cut Salisbury’s deficit to 20-7.
After Zakey Stevenson took off for a 60-yard sprint to put Southeast Guilford ahead 33-7 in the fourth quarter, Glenn responded with a 44-yard gallop that set up his own short run for the Hornets’ second TD.
Shaquez Strickland picked off a pass for the Hornets, Jordan Oglesby had a sack, and D.J. Alexander recovered a fumble that was forced by Jaylen McDowell.
“Everybody did a great job containing on that play, and Jaylen made a big hit,” Alexander said.
The Hornets were still OK at halftime, but the Falcons gathered major momentum when they opened the second half by recovering an onside kick. Then QB Bubba Craven powered straight ahead into the end zone for a TD.
“We kind of fell off a little bit there when we needed to keep up what we’d been doing,” Alexander said.
Follow Mike London on Twitter at @mikelondonpost3.