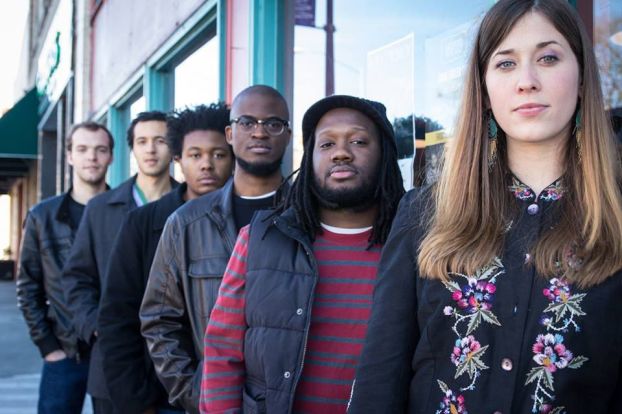 Rebekah Todd and the Odyssey will bring the most wonderful blend of soul, blues, jazz, funk and folk to Salisbury’s Lee St. theatre Oct. 3. The Deluge co-headlining the show and will perform last. The doors open at 7 p.m., with music to follow at 7:30. Tickets are $15 plus tax.
Those in attendance at the Earth Day Jam this past summer will remember Rebekah Todd and the Odyssey and The Deluge as they were both extremely popular acts. It was clear these bands had made a lot of new fans in Salisbury. Now they are back for more.
Todd, a Benson, N.C., native, is promoting her debut album, Roots Bury Deep, with the band, The Odyssey. She’s now based in Greenville, N.C., where she went to school at East Carolina University graduating with a degree in art. She has surrounded herself with an extremely versatile combination of musicians that compliment her soulful voice on her own songs as well as the Ray Charles and Aretha Franklin covers that she enjoys playing.
Roots Bury Deep features Todd on guitar and Demetrice Everett as,”the funky drummer.” Chris Knuckles play saxophone. Evan Roberson is on trombone. William Seymour is on bass. And Brandon Shamar plays the keyboard. They came together to play a one-time gig of cover songs this past July for a special occasion. But Todd was quick to realize that this group was perfect to take into the studio to record her album. Now the group is touring and giving live audiences a refreshing blend of American music that is as much fun as it is beautiful and moving.
For instance, on the opening track, Devil’s Gonna Buy, Todd’s vocals are a haunting blend of gospel and Louisiana Delta blues. The Odyssey compliment her with a New Orleans funeral-procession style of melancholy that truly stirs the soul.
“It sounds really cosmic and beautiful,” said Todd, regarding her album and band. “This creative flow, flowing through all of us, we all reached this other place together. That’s what’s so special about music. You feel something bigger than yourself.”
The Deluge
Brandon Knox and Christopher Lord bring an electrically charged brand of soul and rhythm and blues to Lee St. theatre that is tight and bound to get the crowd moving. Knox and Lord have forged a musical partnership over the past several years based partly on the pair’s love of the music of french jazz guitar legend Jean “Django” Reinhardt. The duo were equally enamored with Steely Dan.
“[Brandon] really is kind of the focal point of what we are doing,” said George Westberry, who plays bass. “He’s a very gifted singer and plays harmonica. He’s one of the people writing most of the music we are doing right now. It’s the chemistry between the two of them [Knox and Lord] that the band has defined.”
The Deluge are working on their third album. The band’s first release, Crying on the Vine, featured the single, Strange World. That song won the award for the Best R&B Song for the 2010 John Lennon Songwriting Contest. The band’s second release was Elephant Graveyard.
“In my opinion, ours is a very honest form of music,” said Westberry. Knox sings and plays harmonica. Lord plays guitar and keyboard. Daniel Seriff is on guitar and mandolin. Jonathan McMillan is on drums.
“Simplicity. Melody. The music of the 60s and 70s was some of the best stuff that ever happened,” Westberry said. “Music was melodic. The voices that came out of that — Otis Redding. Percy Sledge. Brandon has a lot of that “juju,” in his voice, at his core.
“The old saying is, ‘there is nothing new under the sun.’ But there are different ways to interpret old things,” said Westberry. “We kind of landed at roots rock and soul — anything from bluegrass to jazz to reggae. We touch on all those genres.”
Again, those in attendance at this year’s Earth Day Jam can attest that The Deluge puts on an impressive live show. Westberry says that performing live is what really makes it all worthwhile.
“Giving that energy thrown back at you knowing that people are enjoying what you are doing,” is the best part of the live experience, said Westberry. “Taking it in and throwing it back. A lot of energy flow is both ways. I’ve noticed that when we make fans, we make real fans. The people that are there really seem to get it and we are grateful for that.”
Tickets can be purchased online at leestreet.org, by phone at 704-310-5507, or at the box office located at the theater at 329 North Lee St.