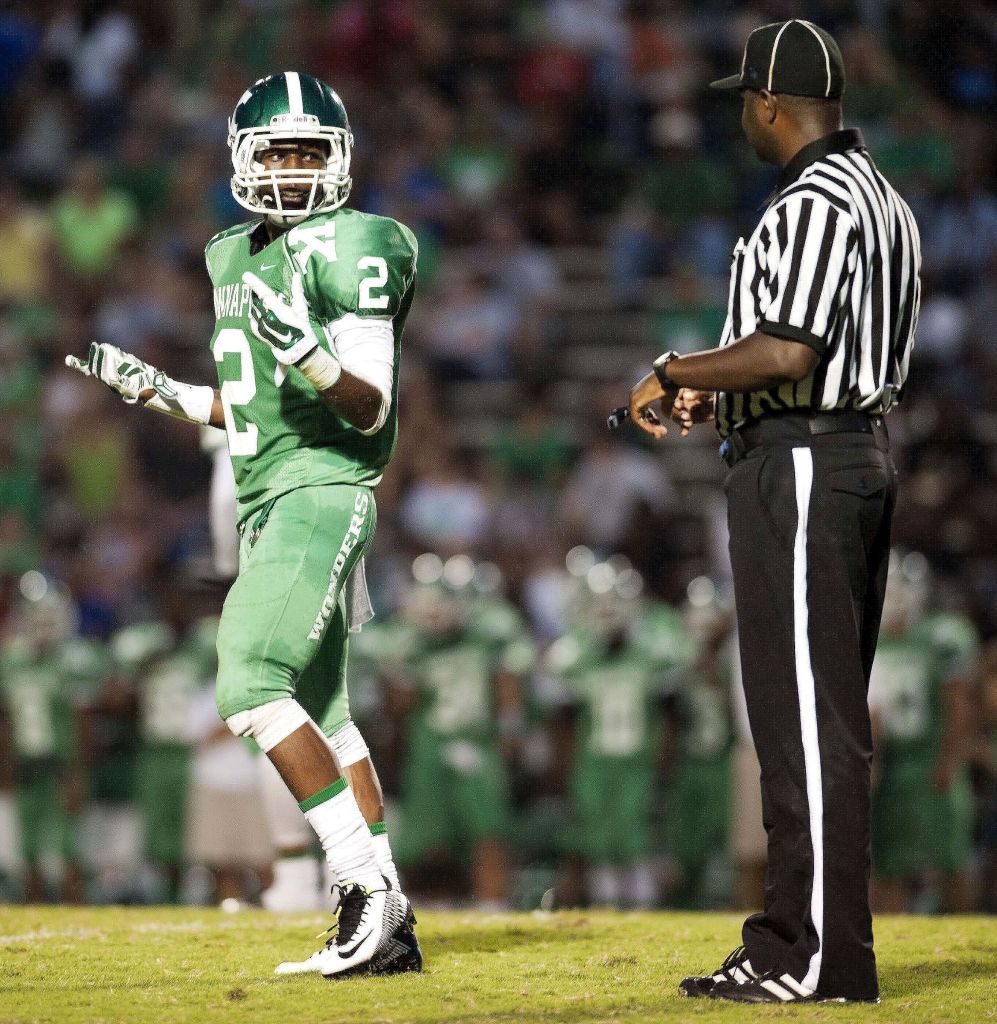 KANNAPOLIS — An informal poll of A.L. Brown football coaches yields an unsurprising result. The team’s best athlete and all-around best player are the same person — senior free safety Daveon Perry.
“Daveon is not only a great athlete, he’s got football knowledge,” A.L. Brown head coach Mike Newsome said. “He’s got this knack, this sense of where to be. He’s got great control of his body, and when he’s got the ball in his hands, he knows how to make cuts. It’s natural. It’s like it’s been bred in to him.”
Being the best athlete and being the best football player aren’t necessarily the same thing. If you’d asked the Wonders coaching staff those questions a few years ago, they would’ve told you Damien Washington, who now plays special teams at North Carolina, was the best athlete but Kalif Phillips, now Charlotte’s star running back, was the best football player.
Perry is not big at 5-foot-11, 175 pounds, but it’s close to a sure thing that he’ll get the opportunity to play college football somewhere. He’s an exciting return man, he knocks people out of their cleats on defense, and he’s a touchdown waiting to happen when he helps out the offense as a slotback.
“He’s got good top-end speed and he’s got exceptional lateral quickness,” said assistant coach Scott Jordan. “But it’s not like Daveon is just a raw athlete. He’s got good hands and he’s got good feet. He’s got a really nice football skill set.”
Check the film and you’ll see that Perry has polish. In a short sequence against South Rowan, he crushes a receiver coming over the middle for a pass breakup. Then he snags a long pass from a scrambling Damon Johnson deep down the sideline. He not only makes a smooth catch, he makes sure his feet are inbounds. Then he drops back to field a punt and makes a half-dozen tacklers miss on a long return.
The stats tell part of the story. Perry has dashed for 218 yards on 12 punt returns and he has another 148 yards on kickoff returns. He already has scored on offense, defense and special teams.
Perry peaked in Friday’s 33-12 road win at North Mecklenburg in Huntersville that opened Mecka play.
“We set a good tone for the conference,” Perry said. “We showed we’re going to compete.”
Perry did a lot of the tone-setting personally. The Wonders didn’t start fast, but Perry scored on defense — a 42-yard fumble return — to break the ice.
“Devin Gray knocked the ball loose, so the credit goes to him,” Perry said. “I was just in the right place at the right time.”
Perry was at the right place at the right time again when North Meck kicked off after scoring. Perry sped 85 yards for his second touchdown.
“Great blocking, and it wasn’t like any one block stood out,” Perry said. “It was everybody, and they made my job easy.”
Perry iced the cake with a fourth-quarter interception.
“He almost scored on the interception as well,” Newsome said. “He’s an explosive guy, and he’s made play after play after play. We’ve got to find ways to get the ball in his hands more often.”
Perry played on the varsity squad his freshman year at South Rowan. Even at that point, he was drawing comparisons to Mark McDaniel, a former Raider star who now starts at cornerback for Catawba.
Perry transferred to A.L. Brown before his sophomore season. He’s been a three-year starter and was All-Mecka as a junior. Greater accolades are likely after this season.
“I’ve got a lot of experience, a lot more than most of our guys,” Perry said. “So it’s important that I play well.”
Defensive coordinator Noah Lyon piled on with more praise for Perry.
“We can do some different things with our coverages because Daveon has been around a long time and has seen it all,” Lyon said. “He’s always in the right place, and he can do things athletically that 90 percent of high school kids can’t do. It’s a real asset to have someone who almost always makes the right reaction to what the opposing quarterback is doing.”
The Wonders (3-2) have a huge home game Friday against a talented Vance team that is 4-1 and lost by five points to highly-ranked Richmond County.
The Wonders will need another all-over-the-place game from Perry to win. While the win is by no means guaranteed, the coaches know Perry will be out there making all the plays he can to try and get the Wonders a victory.
Follow Mike London on Twitter at @mikelondonpost3.