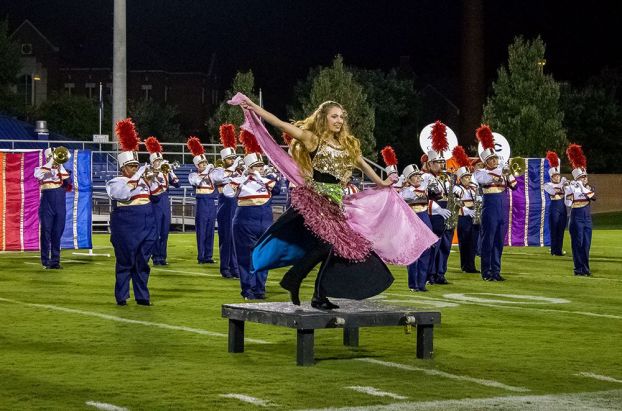 Catawba gets pumped at pep rally

Catawba College students, faculty and staff helped kick off Family Weekend and the 2014 football season by gathering for a pep rally in Shuford Stadium Sept. 25.
There, they were able to get a sneak peak at the Catawba Pride Marching Band’s halftime show, recognize and cheer on the football team before the first home game and enjoy complimentary popcorn provided by Wigwam Productions.
The marching band opened the pep rally with its Cirque du Soleil routine, where members of the color guard used large, colorful panels and parachutes as props. They danced, juggled, and did flips and cartwheels to reinforce the Cirque du Soleil theme.
After their performance, the Pride formed a tunnel for the school’s football players, who came running onto the field to the roar of the crowd.
Head Coach Curtis Walker, microphone in hand, announced which players would be active in Saturday’s first home game of the season. As Walker spoke, each player ran forward to throw a Catawba Indians T-shirt into the crowd.
The pep rally passed quickly, but its impact on those in attendance will last much longer. Throughout the event, the crowd called out in support to their friends who were part of the band, on the football team, and on the cheerleading squad.
A sense of unity and accomplishment could be felt between the Catawba College students, faculty, staff and family members who made the event happen, whether they were on the field or in the stands.