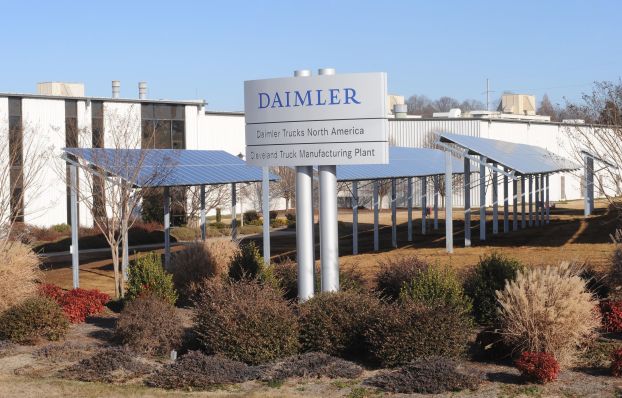 Where are the workers? Freightliner in Cleveland trying to fill hundreds of open jobs

CLEVELAND — Daimler Trucks is trying to fill more than 300 positions at its Freightliner manufacturing plant in Cleveland, but the company is having trouble finding enough qualified workers in the area.
The company has been hiring since April and wants to have more than 1,000 new employees by the end of the year, Roger Nielsen, chief operating officer for Daimler Trucks North America, said. The company has hired 750 people so far, but another 350 workers are needed to meet growing demand as the economy continues to grow, he said.
Nielsen said out of 5,500 applicants, only 13 percent have been hired. The reasons why, he said, vary.
He said 15 percent of applicants failed the required drug test and 25 percent didn’t pass the background check. Another 30 percent of applicants didn’t come to the interview.
Nielsen said the company hasn’t had problems hiring enough workers at its other plants around the country.
He said the Cleveland plant is currently hiring workers mostly for the second shift, which runs from 3 p.m. to midnight. The available jobs at the plant vary from assembly line work — putting on tires or bumpers — to driving the forklift or test driving trucks once they’re assembled.
The plant had over 4,000 employees before the recession. That figure dropped below 1,000 during the recession.
To try and fill open jobs, the company reached out to former employees who were laid off during the recession, Nielsen said, but a lot of them have found other jobs.
Because of the shortage of workers in Rowan County, the company extended its search radius for potential employees to as far away as Hickory, and is offering people with a long commute a $500 signing bonus and another $500 after 90 days of employment to help with relocation.
Nielsen said Daimler wants to have workers from Rowan County. He said it’s important the plant employs people from the local community.
“We’re not looking for folks with years of experience,” Nielsen said. In fact, recent high school graduates are working at the plant. In the spring, the company reached out to high schools in the area to recruit graduating seniors, he said.
“We’re not looking for high-level skills,” Nielsen said, adding that workers will receive the training they need to be successful.
The starting pay rate is around $15 an hour and employees receive health benefits, a 401k and a pension. The company also helps employees pay their college tuition. Nielsen said a lot of second-shift workers take college courses in the mornings.
Nielsen said working for Daimler is great for someone who wants to raise a family, or someone with grandchildren.
Robert Van Geons, executive director of RowanWorks, the county’s economic development organization, said word needs to get out about the available jobs at the Cleveland plant.
“Our goal is to have as many Rowan people as possible working and working in the county,” he said.
Van Geons said RowanWorks and other organizations in the county will continue to work with Daimler to make sure the Cleveland plant’s workforce is drawn from the local community.
People interested in applying should visit www.ncworks.gov and enter keywords “Freightliner” and “Cleveland” in the search bars at the bottom of the page. They can also go to www.daimler-trucksnorthamerica.com and search the keyword “careers.”