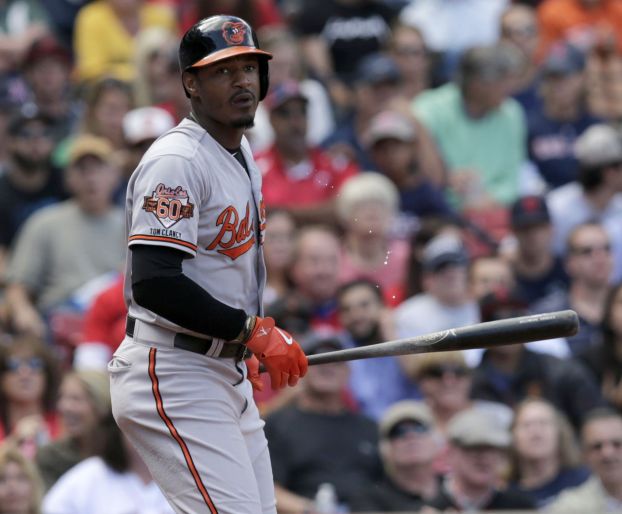 Orioles confident even without stars

BALTIMORE (AP) — The Baltimore Orioles prefer to focus on what they have rather than who they’re missing when assessing their chances of advancing deep into the postseason.
The Orioles went 96-66 and cruised to their first AL East title since 1997 with a standard formula for success: a power-laden lineup, strong pitching and solid defense.
They have no reason to believe anything will change in the playoffs, even though they will begin the AL division series against Detroit on Thursday without three former All-Stars — catcher Matt Wieters, third baseman Manny Machado and first baseman Chris Davis.
Wieters underwent season-ending elbow surgery in May, Machado was lost in August with a torn knee ligament and Davis is serving a 25-game suspension for using amphetamines.
Their absence doesn’t seem to bother the Orioles.
“There are other guys,” said center fielder Adam Jones, who hit .281 with 29 homers and 96 RBIs. “Not one person makes a team. We’ve got guys that can fill in, we’ve got guys that have the same hunger and understand our method and approach to this game. All the guys that have filled in in the wake of injuries have stepped right in and played the game.”
Rookie Caleb Joseph and Nick Hundley will never be confused with Wieters, a two-time All-Star and winner of two Gold Gloves. But Joseph exceeded expectations after finally making it to the big leagues in his seventh pro season, and Hundley contributed immediately after Orioles executive vice president of baseball operations Dan Duquette acquired him in a trade with San Diego on May 24.
Manager Buck Showalter alternated both of them wisely, and the Orioles kept on winning.
“When Wieters went down. It was like a turning point for the team,” closer Zach Britton said. “We could have gone bad, but everyone decided, ‘You know what? Do a little bit extra.’ We brought up Caleb and acquired Nick. At that moment, everything started clicking.
After Machado departed in August, the same thought process applied.
“Having that experience with Matt going down made it easier with Manny,” Britton said.
When Davis missed time earlier in the season with a rib cage injury, Steve Pearce took over at first base. Pearce (.293, 21 homers) has been invaluable, and a good team got even better when Duquette traded for reliever Andrew Miller, third baseman Kelly Johnson and outfielder Alejandro De Aza.
“When somebody gets hurt you need to have somebody step up and fill in,” Duquette said. “Fortunately, we had a little bit of bench strength in players like Steve Pearce, and some of the players we added during the season did a nice job, Caleb Joseph in particular.”
One of Duquette’s best moves came before the season, when he signed free agent slugger Nelson Cruz to an $8 million, one-year contract. Cruz had the best year of his career, hitting a major-league leading 40 homers and driving in 108 runs.
Cruz, who played in two World Series with Texas, knows a winning team.
“It doesn’t matter how tough the game is or how difficult it looks to come back, we find a way to get it done,” he said.
“If it’s not the hitting, it’s the pitching. I think we have one of the best managers in the league to keep everybody on their toes; he’s always moving the pieces.”
The Orioles led the majors with 211 homers, had four starters finish with double-digit wins and are very efficient in the back end of the bullpen. That just might be enough to get them into the World Series for the first time since 1983.
“Offensively they swing bats well, they hit home runs,” Yankees manager Joe Girardi said. “Defensively, they’re very good, very sharp. And they pitch well. I’ve said all along, maybe they don’t have that big name ace but they have a lot of good starters and their bullpen is strong.”
That is why the Orioles are extremely confident about the prospect of playing deep into October.
“We find ways to win,” Pearce said. “When we find ourselves in big games, everybody’s been stepping up all year. That’s why we are where we are, and that’s what you need to do this time of year.”