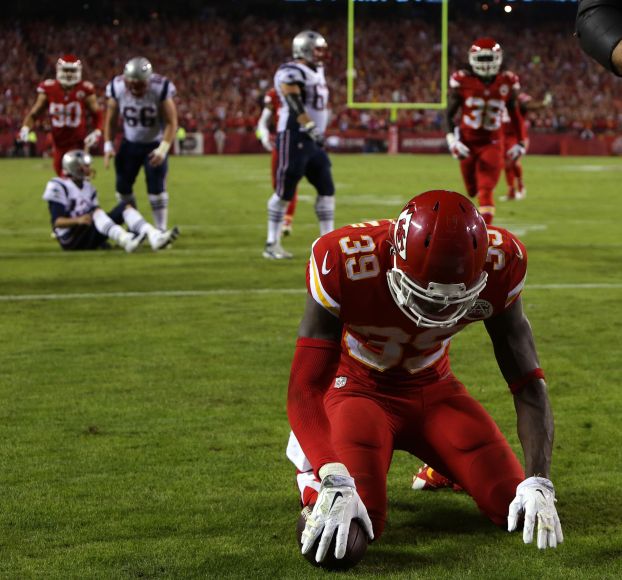 NFL: Abdullah should not have been penalized

KANSAS CITY, Mo. (AP) — The NFL said Tuesday that Kansas City Chiefs safety Husain Abdullah should not have been penalized for unsportsmanlike conduct when he dropped to his knees in prayer after an interception.
The league’s rule book prohibits players from celebrating while on the ground, but spokesman Michael Signora wrote in an email Tuesday that the “officiating mechanic in this situation is not to flag a player who goes to the ground as part of religious expression, and as a result, there should have been no penalty on the play.”
The flag thrown in the fourth quarter of Kansas City’s 41-14 victory over the New England Patriots on Monday night led to criticism on social media, with many wondering how it was different from players such as former NFL quarterback Tim Tebow dropping to one knee in Christian prayer.
Abdullah is a devout Muslim who took a year off from football to make a pilgrimage to Mecca. He said after Monday’s game that he knew before he even reached the end zone he would drop to his knees in thankful prayer after intercepting Tom Brady.
After he slid to the grass in Arrowhead Stadium, yellow flags came flying from the officials.
“I don’t think it was because of the actual prostration that I got the penalty,” Abdullah told The Associated Press afterward. “I think it was because of the slide.”
And that’s precisely the explanation that Chiefs coach Andy Reid said he received from the game officials. They had no issue with the prayer, Reid said, only the celebratory slide.
The Council on American-Islamic Relations, a civil liberties and advocacy organization, issued a statement early Tuesday asking that the NFL take steps in response to the penalty.
“To prevent the appearance of a double standard, we urge league officials to clarify the policy on prayer and recognize that the official made a mistake in this case,” CAIR spokesman Ibrahim Hooper said.
Abdullah is in his second year with the Chiefs after spending an entire season away from the game. He decided that, in the prime of his career, he would join his brother Hamza — who also was playing in the NFL at the time — to make a pilgrimage to Mecca. The Fifth Pillar of Islam is The Hajj, the pilgrimage that all Muslims are supposed to make once in their lifetime.
Abdullah told the AP in an interview last year the brothers wanted to make sure they did the pilgrimage while they still had the health and means to go.
Reid gave him an opportunity to work his way back into the league after he had stepped away.
“I’m pretty sure he understands who I am, what my faith is,” he said. “And again, I think the prostration is all right. It’s the slide. Come to a full stop, get down, make the prostration, get up and get out.”
———
Online:
AP NFL website: www.pro32.ap.org and AP NFL on Twitter: www.twitter.com/AP—NFL