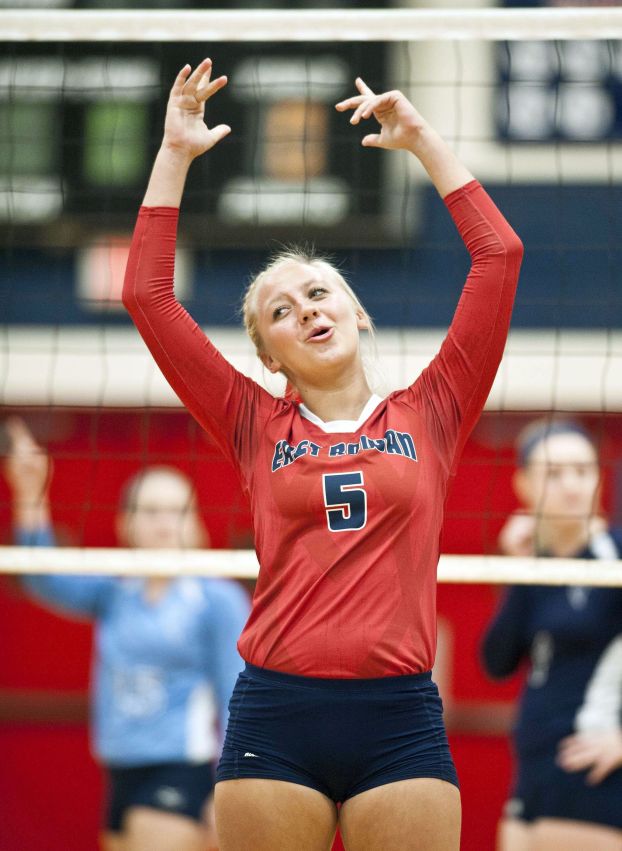 GRANITE QUARRY — East Rowan’s volleyball team held serve on Tuesday in a South Piedmont Conference match it was supposed to win and needed to win. The Mustangs had anxious moments late in the second set, but they beat West Rowan 25-12, 25-22, 25-15 in the East Rowan gym.
East Rowan (11-8, 7-7) sits in the middle of the SPC standings in fifth place. The four teams above the Mustangs — undefeated Cox Mill, Northwest Cabarrus, Carson and Hickory Ridge — appear headed for the 3A state playoffs. If East Rowan is going to qualify, it has to win the league tournament or hope it plays well enough for to earn a wild-card berth.
East Rowan has four games left — non-league against West Davidson and Salisbury, and then SPC matchups with Central Cabarrus and South Rowan to finish the regular season.
“Every game is important to us because we want to be in the playoffs,” East Rowan outside hitter Ashton Rogers said. “We needed to pull through today, and we did.”
The Mustangs got 12 kills from Brittany Small, nine from Avery Wright and six from Rogers.
Diamond Lovell led the Falcons in kills with five.
The biggest difference between the teams was serve receive. Six Mustangs combined for 19 aces, with Rogers accounting for six, Erin Hatley for four, and Small and Macey Beattie for three each. West Rowan (3-12, 2-10) had only four aces as a team.
The immediate goal for the Falcons is winning another game or two and qualifying for the conference tournament. Only the top eight teams qualify for the three-day tournament.
While the record may not show it, the Falcons are much better now than they were in August.
“Seniors have stepped up, players have learned new positions, and we definitely have improved,” coach Courtney Wood said. “I’m pleased with the progress we’ve made but we just didn’t play our game in the first set tonight and we didn’t finish when we were in position to win the second one.”
East Rowan jumped out 11-2 and wasn’t challenged in the opening set. The Mustangs had eight aces. But West Rowan fought harder in the second set, and East Rowan made more mistakes.
“For the most part, we reduced our unforced errors and we passed better than we have been, but in that second set we were hurting ourselves,” East Rowan coach Sandy Basinger said. “West was ahead 13-10, and we’d given them nine of those points.”
West Rowan got a big kill from Taylor Quinn and led 20-18, but the Falcons faltered. The Mustangs regrouped during a timeout, tied the score on a break and took the lead on back-to-back aces by Rogers. East Rowan setter Jordan McCall had 25 assists, and she found Wright and Small for the key kills that got the crowd into it. Then the Mustangs pulled out the set.
“I thought we played with a lot of confidence,” Wright said. “We showed we could work together and finish things out in a close one.”
West Rowan got some great digs from libero Taylor Martin and took its best shot in the middle set, but it still had a little fight left for the third one. East Rowan was only up 13-11, but the Mustangs eventually pulled away on a flurry of kills by Wright and Small.
“We did a good job,” Basinger said. “When we made a mistake, we didn’t let it turn into a five-point run against us. That’s been happening in a lot of our losses.”
Follow Mike London on Twitter at @mikelondonpost3.