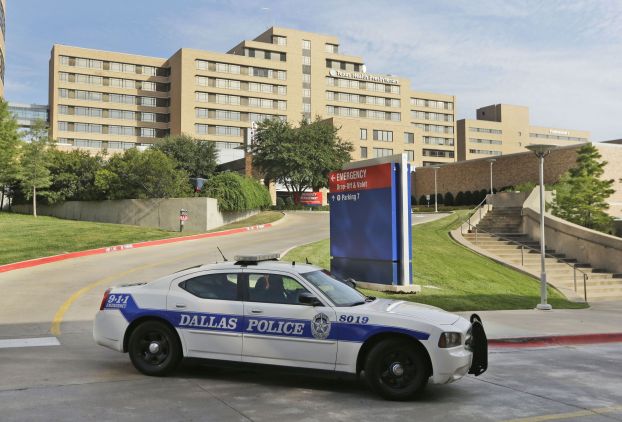 DALLAS (AP) — A patient at a Dallas hospital has tested positive for Ebola, the first case of the disease to be diagnosed in the United States, federal health officials announced Tuesday.
The patient was in isolation at Texas Health Presbyterian Hospital, which had announced a day earlier that the person’s symptoms and recent travel indicated a possible case of Ebola, the virus that has killed more than 3,000 people across West Africa and infected a handful of Americans who have traveled to that region.
The person, an adult who was not publicly identified, developed symptoms days after returning to Texas from Liberia and showed no symptoms on the plane, according to the Centers for Disease Control and Prevention.
CDC Director Dr. Tom Frieden said the patient came to the U.S. to visit family and has been hospitalized since the weekend.
State health officials said no other cases are suspected in Texas.
Specimens from the patient were tested by a state lab and confirmed by a separate test by the Centers for Disease Control, said Carrie Williams, spokeswoman for the Texas Department of State Health Services.
Zachary Thompson, director of Dallas County Health & Human Services, said health officials in North Texas are well equipped to care for the patient.
“This is not Africa,” he told Dallas station WFAA. “We have a great infrastructure to deal with an outbreak.”
Twelve other people in the U.S. have been tested for Ebola since July 27, according to the CDC. All of those tests were negative.
Four American aid workers who became infected while volunteering in West Africa have been treated in special isolation facilities in hospitals in Atlanta and Nebraska, and a U.S. doctor exposed to the virus in Sierra Leone is under observation in a similar facility at the National Institutes of Health.
The U.S. has only four such isolation units, but the CDC has insisted that any hospital can safely care for someone with Ebola.
Ebola symptoms can include fever, muscle pain, vomiting and bleeding, and can appear as long as 21 days after exposure to the virus.
Health officials use two primary guidelines when deciding whether to test a person for the virus — whether that person has traveled to West Africa and whether he or she has been near friends or relatives or other people who have been exposed to the virus, said CDC spokesman Jason McDonald.
Since the summer months, U.S. health officials have been preparing for the possibility that an individual traveler could unknowingly arrive with the infection. Health authorities have advised hospitals on how to prevent the virus from spreading within their facilities.
People boarding planes in the outbreak zone are checked for fever, but that does not guarantee that an infected person won’t get through. Ebola is not contagious until symptoms begin, and it takes close contact with bodily fluids to spread.