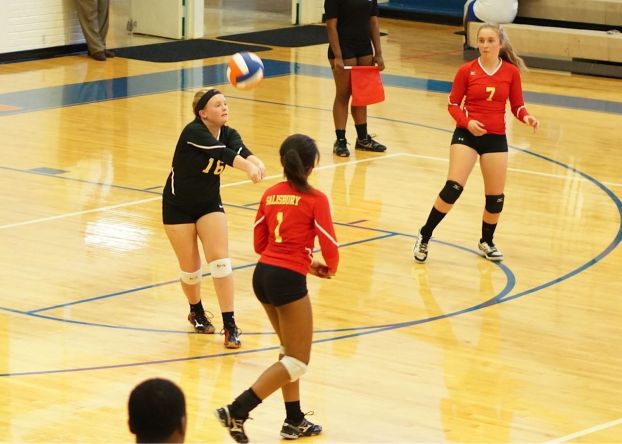 Carson beat Cox Mill 3-0 and moved back into first place in the SPC.
Brandon Flores scored two goals, while Colton Correll had one. Correll and Raunel Vasquez had assists.
Grayson Owens had the shutout for the Cougars.
Carson (10-2, 7-1 SPC) plays at West Rowan on Thursday.
• Central Cabarrus beat Northwest Cabarrus 2-1 in SPC soccer.
• Salisbury rolled 6-0 against Davie in non-conference soccer on Tuesday.
Scoring for Salisbury (12-4) were Andrew Kalogeromitros with two goals, and Landon Goodman, Joshua Lynch, Kevin Flores and Arnold Lezama with one each.
It was the first career goal for Lezama, the Hornet keeper, who returned from action after three weeks on the DL. Arturo Ramirez and Lezama combined for six saves and the shut out.
Assists went to Ahmedin Salcinovic (two), Kalogeromitros, Jamie Henriquez, and Lynch.
The Hornets return to action on Oct. 6th against East Davidson.
The jayvee/varsity doubleheader will be at Ludwig Stadium at 5:30 and 7 p.m.
Salisbury’s jayvee team won 4-1 against Davie on Tuesday.
Santiago Caballero scored twice for the Hornets. Jerime Diaz and Garrett Shermer scored a goal each.
Forty-two GARS members played in the fourth round of the annual tournament at Lexington Golf Club.
Low ‘A Flight winner was Clyde Crawford with a net of 63.52. Low ‘B’ Flight winner with a net of 68.27 was Bobby Bryant. Low ‘C’ Flight winner with a net of 68.49 was Harry Agner. Low ‘D’ Flight winner with a net of 73.60 was John Daniels.
• Sixth-four GARS members played recently in foursomes at Rolling Hills.
Low ‘A’ Flight player with a net of 61.88 was Dick Hatoway. Low ‘B’ Flight player with a net of 63.91 was Bill Hathcock. Low ‘C’ Flight player with a net of 60.68 was Larry Luther. Low ‘D’ Flight player with a net of 68.36 was Harold Caudill.
• The Corbin Hills women played in their annual Mary Cobb McComb Member-Member Tournament on Tuesday.
The winner with overall low net was the team of Becky Isenhour and Susan Morris.
In the First Flight, second low net went to the team of Beth Calhoun and Toni Iossi and low gross went to the team of Mary Seaford and Kristi Laton.
In the Second Flight, low net went to the team of Carolynn Ries and Anna Robinson and second low net went to the team of Norma Burgess and Sharon Deal. Low gross went to the team of Carole Payne and Phyllis Nichols.
Salisbury defeated sixth-ranked West Davidson 9-0 Tuesday at Salisbury to wrap up the CCC championship. Kayla Honeycutt, Grace Steinman, Kathryn Rusher, Maria Capito, Emily Capito and Julia Honeycutt were singles winners.
Kayla Honeycutt-Emily Capito, Rusher-Maria Capito, and Steinman-Julia Honeycutt on in doubles.
The Hornets their 12th consecutive title. They won 17 of the last 18 crowns.
Salisbury closes the regular season with a match against North Rowan at City Park on Wednesday at 4:30 p.m.
• North Rowan won 5-4 against Lexington in CCC tennis on Tuesday.
Alexis Rice, Indya Wiggins and Brandy Fox won in singles for the Cavaliers. Victoria Scheve-Fox and Rice-Wiggins won in doubles.
Scheve-Fox won the decisive match at No. 2 doubles.
North Rowan (8-6, 3-4) is in third place.
• South Rowan won 7-2 against Central Davidson in non-conference tennis on Tuesday.
Cierra Hunter, Mariah Mason, Marissa Sides, Jaycie Gynn and Olivia Sides won in singles.
Marissa Sides-Gynn and Olivia Sides-Kaitlyn McCombs won in doubles.

Salisbury’s girls golf team shot 119 and won Tuesday’s CCC golf match at Sapona Ridge.
Isabella Rusher and Grace Yatawara shot 35s. Caroline Parrott shot 49. Shelby Holden shot 56.
Rusher (ankle) returned after missing one match.
West Davidson shot 129, with Olivia Mast carding a 39 to pace the Green Dragons.
East Davidson shot 176, while Lexington shot 180.
Lenoir-Rhyne won 3-1 against Catawba on Tuesday in Hickory.
Former North Iredell star Brooke Redmond had 18 kills for the Bears. Emma Pope (South Rowan) had six digs.
Erin Morant had eight kills for the Indians.
Catawba’s men took fifth at the Tusculum Fall Classic which concluded on Tuesday.
Catawba’s 576 total was 17 shots behind winner Lincoln Memorial and was good for fifth place.
Catawba’s Matt Hardman finished the tournament in third place individually after his second consecutive 69.
Hardman’s 6-under, 138 total tied for the best two-round tournament in school history. The senior was two shots off the pace of medalist Brad Hawkins of Tusculum.
As a team, the 576 team total was the third best score by a Catawba team in a two-round tournament.
• Catawba’s women tied for fourth at the Tusculum Fall Classic.
UNC Pembroke won the event.
Freshman Anthea Gnielinski led the Indians with a fifth-place finish. She followed Monday’s 73 with a 77 on Tuesday.
Her 150 total was three shots off the winning score of 147.
UNCP’s Amanda Levy topped teammate Laura Bird in a playoff for medalist honors.
Madison Kennedy (Salisbury) shook off an opening-round 85 to tie the lowest round of the tournament with a 1-under 71 on Tuesday. She finished 18th. Alexis Kershaw placed 11th after rounds of 77 and 78.

Knox won 28-0 against Corriher-Lipe in seventh-grade football.
Scoring for the Trojans were Lawon Blackwell and Reggie Everhart. Everhart and QB Jacquez Smith added 2-point conversions. Blocking well were Milo Walser, Michael Guerra, Dehavion Blake, Roman Fuentes and Donovan Blair.
The Knox defense not only had a shutout, it also scored two of the touchdowns. Leading the way were Rodney Covington, Jabril Norman, Jadarius Wood, Donovan Corpening and Damien Dillard.
Knox plays Erwin at East Rowan next week.
Coming off a seventh- place finish at Kentucky Speedway in his last outing, Justin Allison (West Rowan) is eager to get back behind the wheel for the ARCA 98.9 at Kansas Speedway while debuting his own team — Justin Allison Racing — on Friday, Oct. 3.
Allison made his series debut at Kansas Speedway last year, finishing 11th.
One year later, Allison has compiled one win (Pocono Raceway), three top-five and six top-10 finishes in only nine starts this season in the ARCA Racing Series.
“I’m excited about going back to Kansas,” Allison said. “It’s a place I’ve already been, and I like the track. I’m also excited about running my own stuff and starting my own team. I’d like to thank everyone who made it possible for me to run my car at Kansas and race in ARCA for the 2014 season”.
This time around at Kansas Speedway, Allison will compete in the No. 8 HAVACO Sales/Rush Racing Products/ Collins Engineering Ford Fusion.
I can’t wait to hit the track on Friday,” Allison said. “My team and I have worked tirelessly to get this car ready for the long trip out to the Midwest, and I’m just ready to see where we stack up. It’s a really humbling experience to have this opportunity, and I just can’t thank everyone enough for all of the hard work put into this effort.”
On Friday, the one and only practice session kicks off at 9 a.m. CDT, followed by Menard’s Pole Qualifying Presented by Ansell at 1:35 p.m. CDT. The ARCA 98.9 at Kansas Speedway will be live on Fox Sports 2 at 8:30 p.m. EST.
KANSAS CITY, Mo. — The Oakland Athletics and Kansas City Royals were tied 7-all after 10 innings Tuesday night in a dramatic AL wild-card game.
Quite a start to October baseball — even though this one appeared to be over in September.
The A’s raced out to a 7-3 lead by the sixth inning, but the Royals countered with three runs in the eighth. Nori Aoki’s sacrifice fly off Sean Doolittle in the ninth forced extra innings.
Kansas City was appearing in its first playoff game in 29 years.
, had a chance to score the winning run in the 10th. Salvador Perez grounded out with Eric Hosmer on third base to end the inning.
The A’s were trying to avoid an epic late-inning meltdown that in some ways mirrored a second-half collapse that forced them to claw their way into the playoffs on the final day of the regular season.
The winner advances to play the Angels in the AL Division Series starting Thursday.