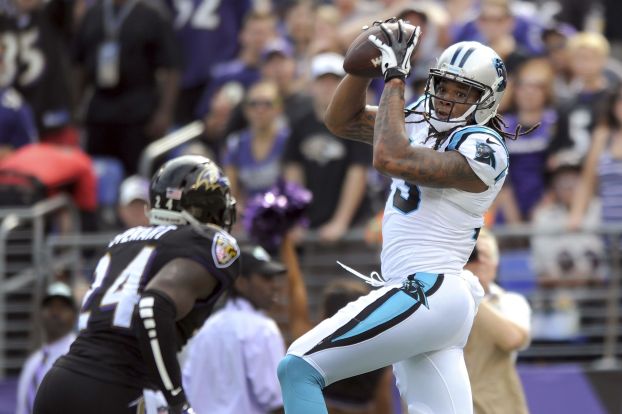 Associated Press
CHARLOTTE — Panthers running back DeAngelo Williams is doubtful for Sunday’s game against the Chicago Bears, the latest setback for Carolina’s rushing game.
Williams, who had just returned to the lineup after missing two games with an injured hamstring, injured an ankle during the second quarter of Sunday’s game against the Baltimore Ravens.
“His foot’s sore,” Panthers coach Ron Rivera said Monday. “It doesn’t look like it’s anything structural, but it’s sore. So he’s probably going to start this week off as doubtful.”
Williams, who was seen in the locker room Monday wearing a walking boot on his left foot, will be evaluated later this week, Rivera said. His absence from the lineup, however long, hits a roster already thin at running back.
Pro Bowl fullback Mike Tolbert was put on short-term injured reserve last week with a hairline fracture in his left leg. He will not be eligible to return to the lineup until mid-November.
Jonathan Stewart (sprained right knee) and Fozzy Whittaker (quadriceps) are out indefinitely, and backup fullback Richie Brockel hurt his ankle Sunday.
Undrafted rookie Darrin Reaves, who had 26 yards on 12 carries against the Ravens, will start against the Bears.
“I’m starting to be able to live my dreams out, and that’s a good feeling,” he said. “Not under the circumstances we have, with so many guys dinged up, but it’s still a good feeling.”
The effect of the injuries on the Panthers’ offense was evident against Baltimore. Carolina finished with 67 yards rushing in its third consecutive game with less than 100 on the ground.
Rivera said earlier Monday that the Panthers were considering bringing in a free agent to shore up the running game. Later that day, the Panthers signed veteran running back Chris Ogbonnaya.
Ogbonnaya, a seventh-round pick by St. Louis in the 2009 draft, has played in 46 games with the Rams, Houston Texans and Cleveland Browns. He has rushed for 660 yards and caught 96 passes for 714 yards.
To make room on the 53-man roster, Carolina waived running back Tauren Poole, who was signed to the practice squad last week before being moved to the active roster the day before the Ravens game.
Rivera said Whittaker would return to practice on Wednesday. His status for Sunday’s game, like Stewart and Williams, is still undecided.
Brockel said his injury wasn’t structural, and he should be ready to play against the Bears.
“We’ll see how (Stewart) is on Wednesday,” Rivera said. “He did a little bit of work on Friday and Saturday, and didn’t look as good as I was hoping. We’ll see how he is come Wednesday when he does some more work.
“Fozzy did some good things for us (in the preseason), but he’s coming off an injury, so I don’t know how available he’ll be. That’s why hopefully Reaves will continue to get better, and if we end up having an emergency guy come it, hopefully that’s the kind of guy who can pick it up.”