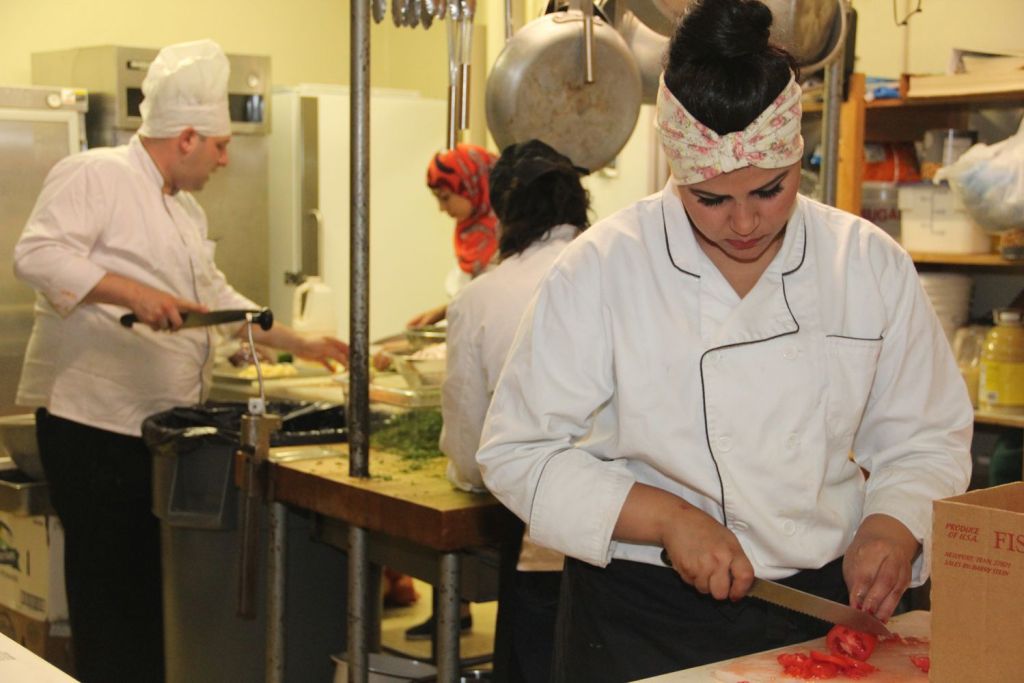 Sharing a meal is a great way to get to know someone.
That’s exactly what happened Sept. 23 at St. John’s Lutheran Church, as some 160 members of the congregation and local community attended a luncheon and cooking demonstration prepared by six Palestinian chefs.
The event was the North Carolina kick-off for Room for Hope, a celebration of Palestinian arts wrapping up today with venues in Burlington, Chapel Hill, Charlotte, Hilton Head and Chicago.
The chefs are instructors and students at Dar al-Kalima University College in Bethlehem, a ministry of Christmas Lutheran Church. The congregation, led by the Rev. Mitri Raheb, is a mission partner of the St. John’s congregation.
Congregational and community groups and individuals sponsored a dozen tables for the luncheon. The St. John’s Wild Women, for example, hosted a table for students from Knox Middle School. The congregation has a longtime relationship with its neighborhood school.
The six students were chosen to attend by Assistant Principal Tonya German, also a member of St. John’s. Layla Mohammed and Marlin Quintero were among the students who said they were eager to sample Palestinian cuisine.
“This is a good experience for our kids at Knox,” said Frank Dyson, an eighth-grade social studies teacher, who attended with Phil Wertz. In his career in the military, Dyson visited 14 countries on three continents. He told the students that the smells emanating from the kitchen reminded him of the aroma of Egyptian food.
Dyson was enthusiastic about the recent arrival of the school’s co-principals, Michael Waiksnis and Latoya Dixon.
“We’re loving it,” he said. “When you can go back to work with excitement, it makes a difference.”
There was also excitement among those who attended the luncheon, to be able to get a taste of another culture.
Kathy Cannata’s parents were from Hungary, and said that Middle Eastern food was similar to Turkish food.
Such similarities, she said, remind us of “how we’re related, not how we’re different.”
Christmas Lutheran’s programs, including an academy for children and youth and a senior care program, make the church the third-largest private employer in the area, Raheb said. These programs, he said, are an investment of the people of Palestine, a focused rebranding, if you will.
During a cooking demonstration before the meal, Bassem Hazboun, the lead instructor in the culinary program, prepared several dishes that the group would enjoy for lunch, among them hummus, eggplant salad or baba gahnouj, and a semolina cake that was served with creamy Lebanese Delight for dessert.
He said later that vegetables were an important part of the Middle Eastern diet — chickpeas, okra, green beans, cauliflower, eggplant, zucchini and cucumbers. Bread is also a staple, along with olive oil. Chicken, beef and lamb are the main sources of protein.
Other chefs who came from the program in Bethlehem were Joey Canavati and Elias Juha, along with recent graduates Waad Karram, Ashraqat Sbaith and Luna Khalawi.
During his remarks, Raheb said that he has been a Christian all his life, and grew up just across the street from where Jesus was born. He has emerged as a key voice in Palestine, advocating peace in the Middle East. He is the author of several books on the region, and his latest book is “Faith in the Face of Empire.” He signed copies during the St. John’s event.
“Jesus lived his entire life under occupation and died under it,” he said, so the question of occupation is raised in the Bible. And the question, “God, where are you?” was raised over and over during the recent war in Gaza, he said.
“If you live in Palestine,” he said, “you have the feeling that God does not move a finger.”
But when the Israelites went into exile, he said, “God was doing the unexpected. God himself packed his luggage and went with his people into exile.”
He added, “Our forefathers were able to see God. If you can see God in all of these situations, there is no situation where people cannot see God.”