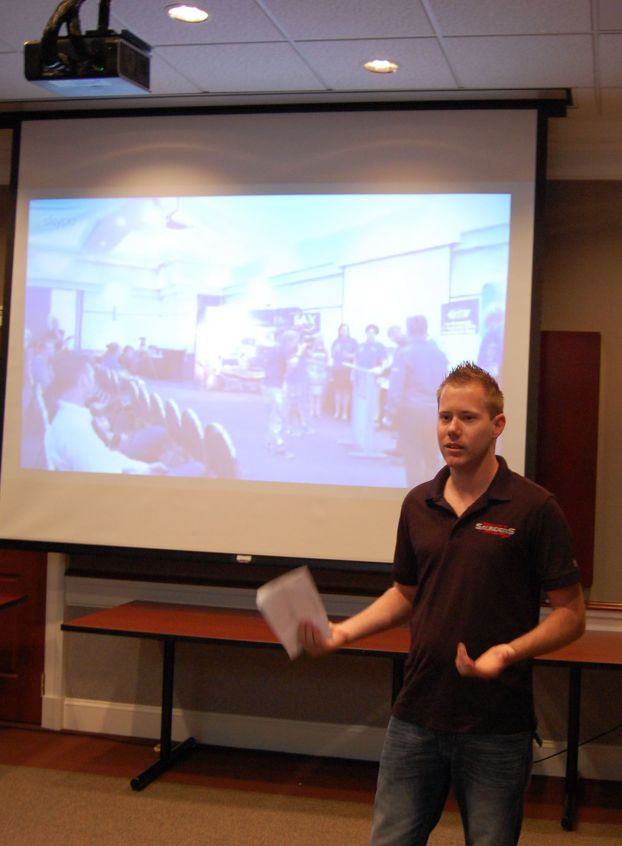 First Australian-owned NASCAR team to be based in Rowan

The distance between Salisbury and the east coast of Australia is more than 9,000 miles, but it felt a lot closer than that Monday evening.
Roo Motorsports, the first Australian-owned NASCAR team, was welcomed to the community during a gathering at the RowanWorks offices on East Innes Street in downtown Salisbury. The team is based in the Speedway Business Park just east of Interstate 85 near the Peach Orchard Road exit.
The team’s driver, Scott Saunders, was on hand to meet business and public officials from around the county. There was also a simultaneous video stream as the team held a press conference in Brisbane, Australia, at 10 a.m. local time to announce a long-term title sponsor for the team.
Saunders, who was born in Australia but has lived in the U.S. since he was a teenager, said the new team is a dream come true for him and his father, Noel, a former race car driver.
Saunders, who won multiple karting championships around the world before coming to NASCAR about five years ago, said racing for other NASCAR teams wasn’t working out for him and his sponsors, who are mostly Australian. So a couple of years ago him and his dad began forming their own team.
“It had always been a dream and ambition of my dad’s and mine to own our own team one day,” he said, “One day, it just kind of came to reality that we could do it.”
His dad is now the general manager of the team.
Beginning next year, Scott, who is currently the team’s only driver, will race full time in the NASCAR Truck Series. He said the goal is to reach the Nationwide Series in two or three years.
Saunders, 25, said his team was working out of Mooresville but came to Rowan County because they wanted a place that wasn’t surrounded by other NASCAR teams. He is currently living in Concord, but said he is moving to Kannapolis soon.
Brett Stone, who does marketing for the team, told the dozens of people in attendance that Roo Motorsports is happy to be in Rowan County and looks forward to working with the community. He said the team plans to have a real presence in the community, and that they’re thankful for the support they’ve already received.
RowanWorks Executive Director Robert Van Geons thanked the team for making an investment in the community.
Regarding the good turnout at the event, Elaine Spalding, Rowan County Chamber of Commerce president, said, “It just really speaks to how welcoming the business community of Rowan County is.”
Salisbury City Councilwoman Karen Alexander said it’s great that the team decided to locate nearby.
“The fact that they are international is really exciting, and the commitment they have to the community is great,” she said.
The title sponsor announced during the press conference in Brisbane is called SAX Suspension Technology, and it’s based in Brisbane.