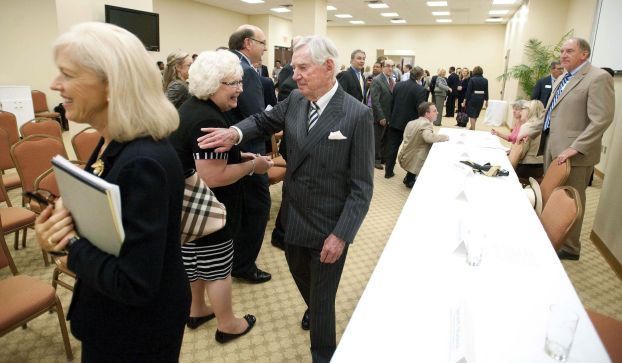 KANNAPOLIS — Billionaire businessman David Murdock wants his namesake research institute to be the best in the nation and on Tuesday he piled on $15 million more annually to help with his goal.
The $15 million yearly contribution to the David H. Murdock Research Institute would continue indefinitely and not be dedicated to any particular area of the institute, Murdock said. Instead, it would pay for current programs and various expansions.
It’s the second year in a row that Murdock, the 91-year-old owner of Dole Foods, has announced a multi-million-dollar contribution to the research institute. Last year, he announced a $50 million contribution to the facility over eight years. To date, he’s donated more than $800 million to the N.C. Research Campus, which he founded in 2005.
During the recession, Murdock said, he lost money and the annual $15 million donation represents an uptick in personal income since that time.
His primary focus during the announcement was the intention to expand the research institute and N.C. Research Campus.
“By building the financial base of this institution, we will find more and more people wanting to be among us,” he said. “I’m very proud and very pleased to be able to stand here among you with my pocketbook out in my hand. I will see that no matter what the longevity of my life is that (the donation) will continue.”
The N.C. Research Campus houses multiple universities in addition to the David H. Murdock Research Institute. The institute functions as a hub of research for the various universities, said David Nieman, director of Appalachian State’s Human Performance Lab.
“It is just a jewel … that the UNC System has access to by being here,” Nieman said after Tuesday’s announcement.
Nieman touted several projects conducted at the N.C. Research Campus, including a study that showed 45 minutes of exercise kept metabolism elevated for 14 hours and helped burn extra calories.
Murdock’s primary focus is on health and fitness. He repeatedly touted the importance of health during Tuesday’s announcement.
“I can’t help but say that the biggest thing that I am interested in is proper eating by everybody,” Murdock said. “Our scientific studies are working on all sort of different things here. The best way to protect your body is by eating properly. I cannot say that with proper eating you never get sick, but there’s a great deal of benefits from fruits and vegetables to keep you healthy.”
More than eating healthy, Murdock is focused on finding a leader for the research institute.
“I want to get a super-heavy-weight scientist to come in here and take over,” he said. “I know what we need to do. I just need to find someone great enough to see that everybody else knows that. I want this to be the greatest scientific center in America and I have the financial wherewithal myself to say that happens.”
Dr. Leonard Williams, director of NC A&T’s Center for Excellence in Post-Harvest Technologies, said schools at the N.C. Research Campus use the research institute’s facilities consistently because of the quality of equipment in laboratories.
From a research perspective, Nieman said, $15 million annually is a tremendous contribution that could further boost the quality of research being conducted.
“What I feel it means, and of course time will tell, is that they should be able to hire several top-level researchers, which they do not have now,” he said. “I don’t know of any other place in the U.S. where you have eight other universities and industry working all together. I think that this whole concept has nowhere to go but up.”
Benjamin Machon, the research institute’s business development director, said the $15 million annual donation could draw more interest and more money to the facility. Machon said the perpetual donation is significantly more than the facility receives currently.
“It’s going to allow us to do some things we wouldn’t be able to do otherwise,” Machon said.
The N.C. Research Campus is on the site of the old Pillowtex Corp. manufacturing plant. It’s a private-public venture created to foster collaboration and further advancements in the fields of biotechnology, nutrition, and health.