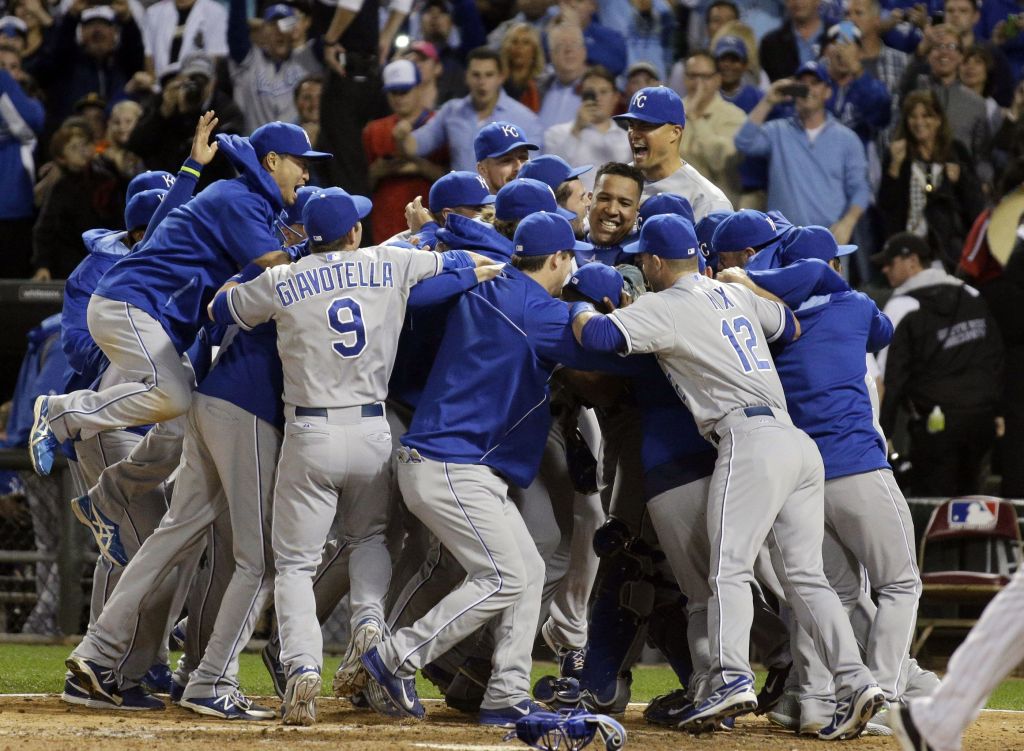 KANSAS CITY, Mo. — The Kansas City Royals made one of the boldest trades in franchise history two years ago.
The Oakland Athletics made a similarly aggressive move just a couple of months ago.
The results of both will be in the starting spotlight Tuesday night.
For the Royals, it’s “Big Game James” — James Shields, the centerpiece of a deal with the Tampa Bay Rays that finally pushed the long-downtrodden franchise into the postseason for the first time in 29 years. For the A’s, it’s Jon Lester — the postseason star of the Red Sox last season who was acquired by Oakland at the trading deadline just for this moment.
The one-game AL wild-card playoff. The winner advances to face the Los Angeles Angels in the best-of-five division series Thursday. The loser trudges away into the offseason.
“I’ve only been here for two years,” Shields said Monday, “but when I got traded over here, I knew the magnitude of what this organization was headed for. And when I got here, walking around the city and talking to the fans and really relishing the 29 years, it’s a special moment.”
The teams share plenty of similarities: pop-gun offenses backed by strong starting pitching and two of the dominant bullpens in baseball.
They also share a significant difference: Oakland has plenty of postseason experience, making it three straight years, while Kansas City has languished near the cellar for decades.
That’s the biggest reason why Royals general manager Dayton Moore got Shields and shut-down reliever Wade Davis prior to last season, trading soon-to-be AL Rookie of the Year Wil Myers and pitching prospect Jake Odorizzi to Tampa Bay.
Moore wanted a legitimate ace for the starting rotation, a pitcher who had tasted postseason success, and who could mold a young but rapidly learning Kansas City clubhouse what it takes to win on the game’s biggest stage.
Shields has delivered. He’s pitching to a 2.31 ERA this September, and the Royals have won four of his starts in some high-pressure games.
“If you sit back and look at it, it means everything. It was the trade that got us over the hump,” Royals manager Ned Yost said. “Would we be in this situation without James Shields and Wade Davis? No. In my mind, the trade did exactly what we hoped it would do.”
While the Royals were comfortable in their staff ace, the A’s were still searching for their own. They already had several front-line starters, but general manager Billy Beane had been stung by postseason disappointments, and he coveted a horse for such high-leverage games.
Turns out that the Red Sox were willing to trade away just that kind of guy.
The move Beane made for Lester on July 31, shipping slugger Yoenis Cespedes to Boston, raised eyebrows around the league. And while the Oakland offense took a hit, Lester has done his part. He is 6-4 with a 2.35 ERA in 11 starts since he arrived in the Bay Area.
Now, he gets another opportunity to pitch in the postseason.
“We have a great opportunity ahead of us,” said Lester, who some thought should have been the MVP of last year’s World Series, when he went 2-0 with an 0.59 ERA against St. Louis.
Tuesday night will mark Lester’s 12th start and 14th postseason appearance.
“We’re going to give it the best shot we can and hopefully at the end of the day we’re doing this again,” he said. “You never know what’s going to happen. This could be my last chance.”
It bodes well for him that he’s facing the Royals, a team that likens the left-hander to kryptonite. He went 3-0 with a 2.61 ERA against them this season, winning twice in a span of a couple weeks with Oakland. He also no-hit Kansas City in 2008.
“He has a lot of traits like Shields does. He’s a competitor,” Royals outfielder Alex Gordon said. “He battles out there. You can tell the way he carries himself … Obviously his stuff is great, and that’s why he’s so great in the postseason. He’s a bulldog.”
The Royals were in a pennant race until the final weekend of the regular season, when Detroit sewed up the AL Central, but they were reasonably secure in their wild card. That wasn’t the case for the A’s, who nearly had to play Seattle in a one-off just for the right to play Tuesday.
All that matters now is what happens at Kauffman Stadium, between two starting pitchers who were brought to their respective teams just for this moment.
“All we can think about is this one game against Oakland,” Shields said. “We get past this we have a little breathing room. We just have to really focus on this one game and go from there.”