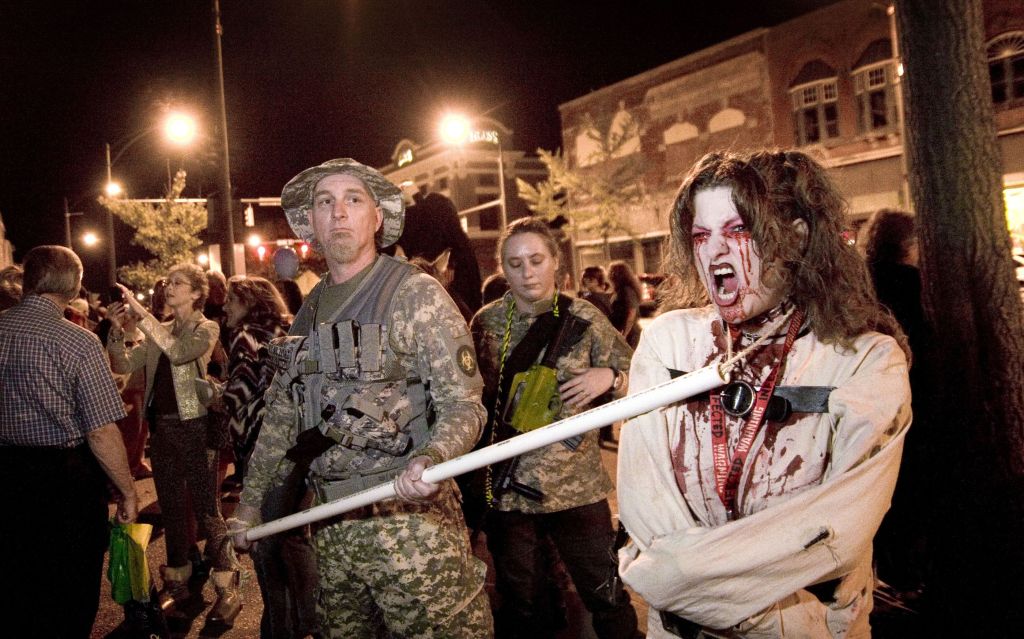 The zombies are coming to Salisbury this Friday!

Are you prepared for the zombie apocalypse? If not, why not?

Whether it is the zombie apocalypse or a natural disaster, being prepared for an emergency means the same thing — having a plan and knowing what to do. In central North Carolina we have a wide array of weather events, from the effects of hurricanes to crippling winter storms. Some areas have gone without power for weeks so emergency preparedness is just good common sense.

A couple of years ago, the Center for Disease Control recognized the parallel and got in on the zombie craze by creating a graphic novel and website devoted to preparing for the zombie apocalypse:

The Downtown Salisbury Zombie Walk started in 2010 when a group of friends — Stacey Cannon, Tony “Digger the Zombie” Spears, and Chris Crowell — were introduced to other zombie walks in Charlotte and Myrtle Beach and thought it would be fun to do the same thing in Salisbury.

Cannon is the co-owner of Dead Ed’s Alternative Clothing and accessories in Downtown Salisbury. Dead Ed’s opened in spring 2011 after the first zombie walk and quickly became headquarters for the event.

After marginal success holding the walk on Saturday the first two years, the friends decided to take advantage of the large crowds attending Friday Night Out events organized by Downtown Salisbury, Inc. The move was well received by both participants and the local community.

“We (Dead Ed’s) set up a vendor booth at various regional events, including other zombie walks, and I’ve had people tell me they like DSZW best because of all the other things going on downtown along with the walk,” said Cannon. “We enjoy an unusual level of support from the community, especially local officials.”

Zombie walks give enthusiasts an opportunity to share their interest in zombies and related themes while also benefitting the community. Costumes range from fresh victims to full-blown rotting zombies and everything in between. Other participants focus on the survival and containment of the crisis, dressing in fatigues and adorned with survival gear.

The event has grown each year. 2013 had 250 registered participants and a grand total of over 300 people coming downtown for the walk. The Friday Night Out crowd, while not prepared for the zombie horde about to descend upon them, nonetheless enjoyed watching the makeup artists perform complimentary makeovers on registered participants. Children especially enjoyed seeing the headless horseman, especially his horse Taz.

Because of the success and potential of the walk, both the Downtown Merchants’ Association and Downtown Salisbury, Inc. asked the DSZW organizers to be responsible for the First Friday event in October 2014.

This year’s DSZW has been dubbed “Paint the Town Dead” in hopes of creating a post-apocalyptic environment to showcase local agencies involved in emergency preparedness. Rowan County officials have created an initiative called Ready Rowan.

“Emergency and disaster situations can happen at any moment, day, or week. Being prepared AHEAD of time is key to ensuring that you and your loved ones, co-workers, home, business, and property are protected to the best level possible. When disaster strikes, the best protection is knowing what to do.”

In addition to Ready Rowan participants, the Rowan County Zombie Outbreak Response Team will have a survivor’s camp set up with zombie-specific advice. As a family friendly event, a Kids’ Zone will also be featured directly across from Dead Ed’s on Innes Street.

Before the start of the walk at 8 p.m., live entertainment will be featured on an outdoor stage off Lee Street in the parking lot behind Dead Ed’s and Nashville Nights. Salisbury bands Made of Monuments and The Throttle Kings will entertain the crowd.

Salisbury Wine Shop is hosting a mead tasting from 5:30 until 7:30 with choices such as Zombie Killer, Necromangocon, and Kill All the Golfers.

Downtown merchants will also be open late for shopping. Downtown restaurants and bars will be open even later for the after-party, a Zombie Bar Crawl with food and drink specials for registered participants.

Featured guests are Larry Mainland and Sonya Thompson, who have appeared on AMC’s hit show “The Walking Dead.” Their characters are among the most widely used promotional images from the show and have appeared on merchandise around the world

The walk will wind through downtown, taking about 45 minutes to an hour. Afterward, participants can enjoy the Zombie Bar Crawl. All-American Pub and Grub, better known as Uncle Buck’s, will host the featured entertainment, with live music from Salisbury band The Graveyard Boulevard and upstate South Carolina rockers The Body Bags.

DSZW is Friday (Oct. 3). Registration begins at 5 p.m. in front of Allied Finance, 231 S. Main Street. At 8 p.m., the walk will begin in front of the outdoor stage off Lee Street in the Wallace parking lot. Registration is a $7 donation, with $2 off for two non-perishable food items. All donations benefit the Humane Society County and Mr. Mike’s Food Pantry.