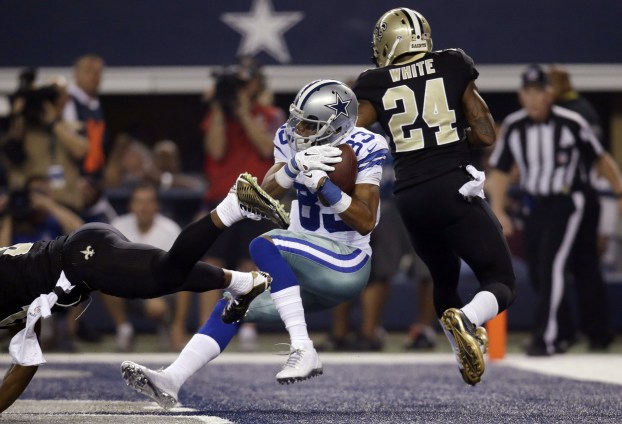 ARLINGTON, Texas (AP) — Tony Romo’s back appears to be getting better by the day, and the Dallas Cowboys’ beleaguered defense held on after a strong start.
Romo threw three touchdowns passes — two to Terrance Williams — and DeMarco Murray ran for a pair of scores in another 100-yard game in Dallas’ 38-17 victory over the New Orleans Saints on Sunday night.
The Cowboys kept Drew Brees and the Saints scoreless in the first half after giving up an NFL-record 40 first downs in a 49-17 blowout loss in New Orleans last year.
Brees led two scoring drives early in the fourth quarter to cut a 31-3 deficit in half before the Cowboys regained control.
“I think we’re a different team than we were last year,” Romo said. “What you find is you forget it’s the Saints and Drew Brees and just go play.”
Dallas reached 3-1 for the first time under coach Jason Garrett after also starting 2-1 the three previous seasons. The Cowboys are tied with Philadelphia for the NFC East lead.
The Saints (1-3) couldn’t sustain the momentum from their win over Minnesota and lost to the Cowboys in Texas for the first time since 1991.
The Cowboys had 445 yards against former Cowboys defensive coordinator Rob Ryan, who directed the scheme that led to one of the franchise’s worst offensive performances in years last season, about 10 months after they fired him.
Romo was 22 of 29 for 262 yards without an interception. He finished an 80-yard drive to open the game with a 6-yard pass to a leaping Williams in the end zone and found him again for 23 yards to put Dallas up 24-9 with 19 seconds left in the first half.
The 34-year-old quarterback coming off back surgery scrambled for 21 yards on third down a play before Murray broke free in the secondary and fell across the goal line on a 28-yard run for a 31-3 lead in the third quarter.
Dez Bryant had a 18-yard scoring catch late in the fourth quarter to secure the second win for Dallas in the past 10 games against New Orleans.
Murray’s first touchdown, a 15-yard run virtually untouched around right end, was set up when Bruce Carter tipped Brees’ pass and Justin Durant intercepted it at the New Orleans 39.
The NFL’s leading rusher joined Emmitt Smith as the only Dallas running backs with 100 yards in the first four games of a season, and he didn’t fumble in the first quarter for the first time this season. He had 149 yards.
“I’ve always had confidence in myself and my ability and the guys I run behind,” Murray said.
The Cowboys led 24-3 at halftime, when Brees had only 84 yards passing after throwing for 838 yards and seven touchdowns without an interception in his past two starts against the Cowboys, both New Orleans wins. The Saints had a team-record 625 yards against Dallas a year ago.
But the former Texas high school star got going in the second half at the $1.2 billion home of the Cowboys, about 200 miles from his high school home in Austin.
Brees had 256 of his 340 yards passing after halftime, throwing for touchdowns of 12 yards to Josh Hill and 13 yards to Jimmy Graham to get the Saints to 31-17 early in the fourth quarter.
The Saints had a chance to get closer, but a drive stalled and punter Thomas Morstead was tackled for a 2-yard loss while trying to throw a pass on a fake punt.
Dan Bailey had a 51-yard field to give Dallas a 1-0 lead in the second quarter. It was the 29th straight made field goal for Bailey, who broke Chris Boniol’s franchise record of 27 last week at St. Louis.
—