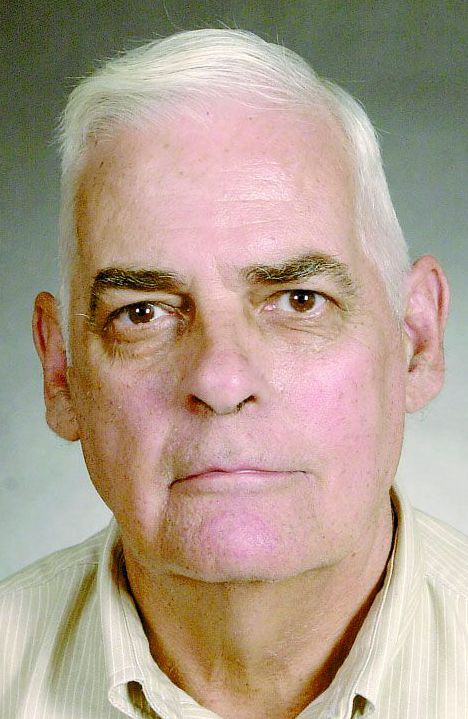 My Turn by Albert McCracken: The lost art of hitchhiking

The other day as I was entering I-85, there on the ramp was a hitchhiker going north. He brought back many memories of my own hitchhiking (thumbing), especially as a college student short of cash. My home at Lake Junaluska was over 300 miles from N.C. State in Raleigh. At that time there were a few things that helped a hitchhiker to get a ride: a small piece of luggage with big school letters on it, white suede shoes or saddle oxfords or a tennis racket. Plus, it always seemed to help to hold up a sign with your destination on it.
On one of my first rides, a shade-tree mechanic picked me up in a pre-World War II clunker. For a heater he had taken a flexible metal pipe, routed it from under the dash, and out through a rear-vented window. That was a dangerous gadget, but riding was sure better than walking.
Once, traveling back to school from Lake Junaluska, a driver dropped me off in Asheville at the Beaucacher tunnel. To get to the other side of the tunnel required walking through it. The tunnel was damp, claustrophobic and noisy. The air smelled of burnt diesel fuel from big trucks and buses. When I was about halfway through, a tire on a big truck scrubbed the curb right beside me with a deafening screech. I just knew that I was a goner.

But I made it through. On another trip home, a driver dropped me off at a small crossroads just west of Hickory. Standing in front of an abandoned service station wasn’t the best place to be on a cold winter night. Soon, a nice shiny Ford V-8 car with wide white sidewall tires slowed and then stopped to pick me up. Ironically, the driver just happened to be a young school teacher I had known as a fellow student at Western Carolina. She was on her way to visit her family in Andrews.
It was luck that she had recognized me in the dark. After our conversation tapered off, she told me about her boyfriend who lived near Asheville. Frank and Sue (not their real names) at that time were having a spat. Sue wanted to stop to talk to him. When we stopped, there was a seemingly perfunctory reconciliation between them, and we were on our way again.
Sue was pleasant and we enjoyed the time together. She agreed to change her route a little to take me home. When we arrived at my home, our dog Brownie came bouncing and barking down the driveway. After unloading my meager luggage, we said our goodbyes, followed by an awkward silence. She then gave me a nice hug and kiss — right there in front of Brownie in the middle of the night.
At Western Carolina, as an unmotivated teen, I once had a lab partner named Ann. She was a straight-A deans’ list student. Ann invited me to attend a civic function near her home in Franklin one weekend. I could hitchhike to Franklin, she said, and spend the night at her home to help with the milking at her family’s dairy. But the next morning I overslept; when I woke up, the cows were all milked, the dairy was scrubbed clean, and everybody was getting ready for church. When Ann’s father took me to a good hitchhiking spot that evening, he was very cordial, but I could tell he preferred that his daughter’s relationship with me remain platonic. I guess I failed the milking test.

To a hitchhiker, Salisbury was just another part of an obstacle course. In my wildest dreams I could never have guessed that some day I would be transferred to Salisbury, live here for so many years, and have so many good friends.
One of my rides through Salisbury was in an old Dodge pickup. We were on 11th Street when a little blond-haired boy shot out into the street in front of the truck. The driver slammed on his brakes as the little boy ran back just in time to miss being hit. I am still haunted by that memory.
Hitchhiking has also been acceptable in Europe. As a student in France, my daughter hitchhiked with a friend from Montpelier to Barcelona, Spain. A truck driver picked them up, then took a collection from other truck drivers as they arrived at his terminal.
The first time I heard a tape player in a car was in a fancy Chrysler New Yorker. A driver picked me up near Raleigh going to Lexington. That was also the first time that I had ever heard the music from The Student Prince. This was the classiest ride that I had ever had.
It’s a shame that hitchhiking is no longer the safe way to travel that it once was. I met a lot of fine people and had a lot of great experiences. But I only had one ride in a shiny black Ford V-8 with wide white sidewall tires and an attractive elementary school teacher.
Albert McCracken lives in Granite Quarry.
“My Turn” submissions should be 500-700 words. Send to ecook@salisburypost.com with “My Turn” in the subject line. Include name, address, phone number and a digital photo of yourself if possible.