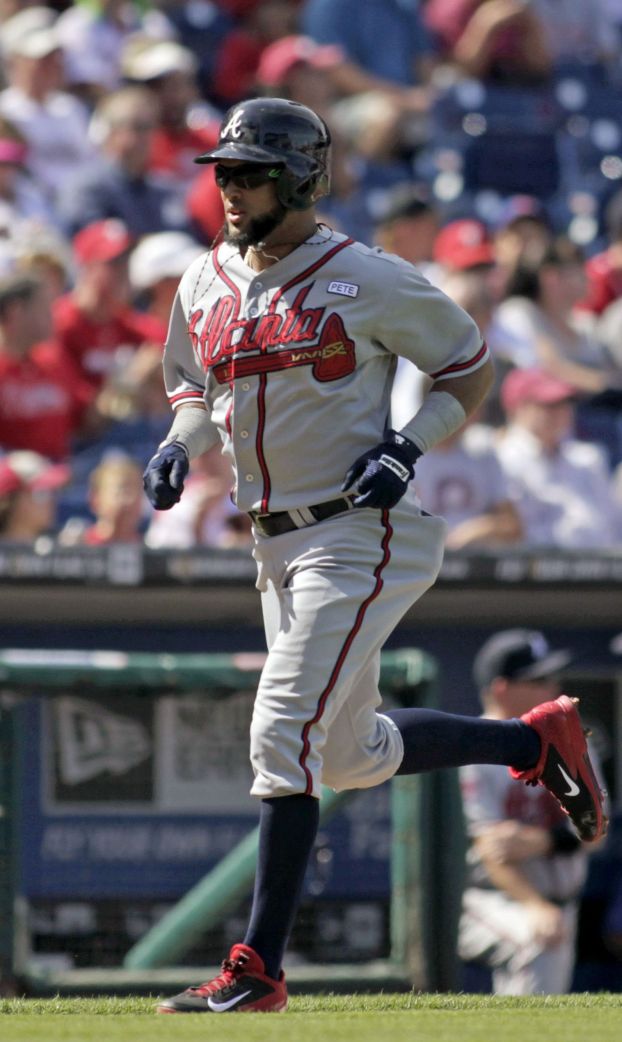 PHILADELPHIA (AP) — Emilio Bonifacio led off the game with home run and Freddie Freeman added an RBI single in the first, and the Atlanta Braves finished a disappointing season with a 2-1 win over the Philadelphia Phillies on Sunday.
The Braves finished with just three hits — all before Phillies starter Cole Hamels (9-9) could record an out.
Five relievers stymied the Phillies, holding them to just four hits, two by Hamels.
James Russell, an emergency starter in place of injured Alex Wood, started for the first time since 2011 and pitched four innings of two-hit ball. Luis Avilan (4-1) picked up the win in relief, throwing two scoreless innings. Craig Kimbrel notched his 47th save.
A half-game out of first place in the NL East on July 29, the Braves ended up in a tie for second with the New York Mets at 79-83. Atlanta won just six of 25 games in a dismal September and was 26-41 after the All-Star break.
Beset by injuries to its starting rotation, the Braves finished with a losing record for the first time since 2008 and just the third time since 1991.
The Phillies scored their lone run in the eighth inning when Freddy Galvis scored on Ben Revere’s double-play grounder. Revere did get a hit earlier in the game to finish tied with Washington Nationals outfielder Dennard Span for the national league lead in hits with 184.
Hamels, who remained in the game after getting hit in the mouth by a Tommy La Stella grounder in the second inning, retired 20 consecutive Braves before hitting Joey Terdoslavich with a pitch in the seventh inning.
The Phillies (73-89) finished with an identical record to 2013 and had consecutive losing seasons for the first time since 1999-2000. It was also the first last-place finish for the club since 2000.
Freeman played every inning of every game this season, the only player in the majors to accomplish that feat this year. In doing so, he also set the Atlanta Braves club record for most innings played in a season with 1449, passing the previous mark of 1447 1-3 set by Andruw Jones in 1999.
Hamels made his 30th start of the season for the Phillies Sunday, reaching that benchmark for the seventh consecutive season and surpassed the 200-inning plateau for the fifth straight year. Both are the best by any Phillies pitcher since Hall-of-Fame lefty Steve Carlton did both for nine consecutive seasons from 1972-80.