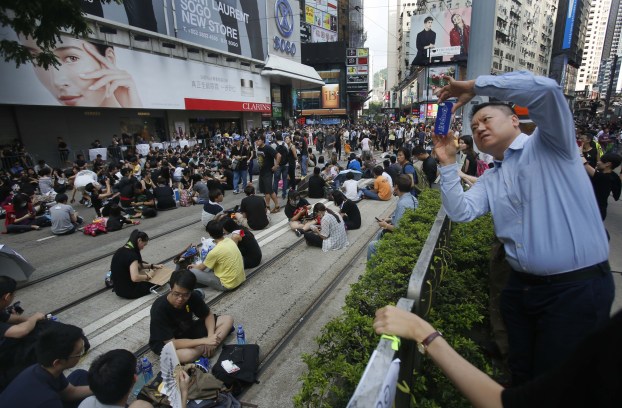 Your daily look at late-breaking news, upcoming events and the stories that will be talked about today:
1. PRO-DEMOCRACY RALLIES SPREAD IN HONG KONG

Protesters defy calls to disperse in a major pushback against Beijing’s decision to limit democratic reforms in the Asian financial hub.

The inauguration of Ashraf Ghani Ahmadzai marks the country’s first democratic transfer of power since the 2001 U.S.-led invasion toppled the Taliban.

Toxic gases and ash force rescuers to call off their effort to bring down the rest of the victims, after earlier airlifting out eight more bodies by military helicopter.

As prosecutors again seek a death sentence in the Arizona case that became a tabloid TV sensation, 300 prospective jurors will report to the courthouse in Phoenix.

One of the world’s most secretive espionage organizations revamps its website to include an online application option for those seeking employment.

Local officials charge nearly 10 times the cost of some of their own employees’ salaries for records relating to the fatal shooting of 18-year-old Michael Brown.

Many try to guess what’s behind Kim Jong Un’s recent disappearance from public view: gout brought on by a cheese obsession, or too much fried chicken and beer.

"It can be as impactful for these guys as someone in a foxhole," says Air Force spokesman Tom Kimball.

In his final at-bat, the Yankee captain hit an RBI-single, giving him a lifetime .310 average.

‘My heart was drawn to this’

SALISBURY — Several years ago when her husband, Bob, was dealing with several health issues and found himself at Walter... read more