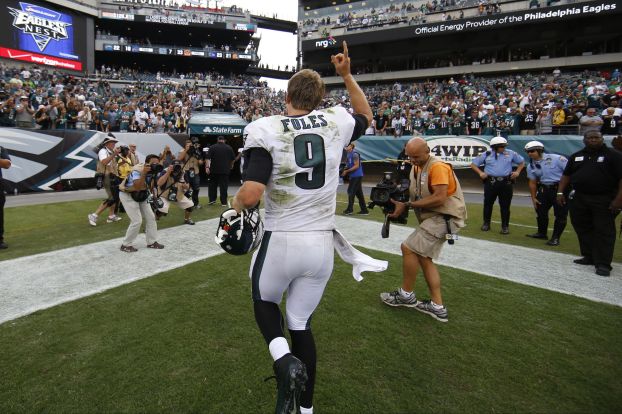 The Eagles have soared so far this season, especially in the second half.
The 49ers would prefer to stick with 30-minute games.
When Philadelphia visits San Francisco on Sunday, it will be a matchup of resilience against retreat. The Eagles (3-0) have rallied to win all of their games, trailing by 17 points in each of the first two, and 10 last week. No team had made those kinds of comebacks in the first three games of a season.
Philly has scored 50 more points after halftime than it has allowed, 74-24.
“One thing I stated to our coaches at the beginning of the year … the only thing you didn’t know going into the season is how would they handle adversity,” coach Chip Kelly said.
“And I think they handled it very well. No one blinked. No one flinches when we get in the situations that we’ve been in in the first three games. They know we’ve got to play a full 60 minutes.”
The Niners know that, too. Problem is, they’ve failed miserably at it. San Francisco has outscored opponents 59-16 in the first half. It’s been pummeled 52-3 in the second half in going 1-2.
“We have the guys to do anything we want,” receiver Stevie Johnson said. “We just have to do it for four quarters. The past couple of weeks have been a tale of two halves. We have to play two halves instead of one.”
New Orleans (1-2) at Dallas (2-1)
Dallas has awakened on offense the past two weeks behind running back DeMarco Murray. He has three straight 100-yard games and a TD in each. The ground approach not only helps QB Tony Romo, it keeps the Cowboys’ so-so defense on the sideline.
That would be a good idea against the Saints, who seem ripe for an offensive explosion. Dallas must show it can slow down TE Jimmy Graham, a matchup nightmare for everyone, and especially for this defense.
A victory would be the Cowboys’ 500th, including playoffs.
Carolina (2-1) at Baltimore (2-1)
Story lines don’t get any juicier than Steve Smith facing his former team.
The 14-year veteran always is stoked for a game, and now there’s the extra boost of being shunted aside by the Panthers. One day after he was released by Carolina in March, Smith was signed by Baltimore. The 35-year-old receiver is averaging 16.1 yards for 18 catches, including an 80-yard touchdown.
“Do I want to show certain individuals I can still play?” Smith said rhetorically? “Honestly, I don’t have to. They’re game-planning for me. (Defensive coordinator) Sean McDermott knows what I bring to the table.”
Panthers standout middle linebacker Luke Kuechly has 354 tackles in the NFL. That’s in 35 games.

Miami (1-2) vs. Oakland (0-3), London
The Raiders traveled across America and lost to New England, although it was closer than most expected. Now they go across the Atlantic for the first time since 1990, when they played an exhibition game with New Orleans.
The Raiders’ bottom-ranked offense can’t get on track against Miami, which has dropped two straight since opening with a home win over the Patriots.
New England (2-1) at Kansas City (1-2), Monday night
It’s downright stunning to see the Patriots struggling so badly with the ball. They rank 26th overall, 27th through the air, and have scored 12 second-half points.
Luckily for them, the defense has been solid, especially against the pass.
Just when you think the banged-up Chiefs have no shot, they go to Miami and dominate. Knile Davis, filling in for Jamaal Charles, rushed for 132 yards.
Tennessee (1-2) at Indianapolis (1-2)
Things have spiraled out of control in Tennessee, which opened with an impressive win under new coach Ken Whisenhunt, then has performed poorly. Getting healthy against the Colts is not an easy assignment; Indy has won eight straight in the AFC South.
Andrew Luck comes off a superb game at Jacksonville (31 for 39 for 370 yards with four TDs). Veteran Ahmad Bradshaw has sparked the running game, averaging 6.0 yards a carry, and has helped as a receiver, too.
Buffalo (2-1) at Houston (2-1)
Yep, barring a tie, one of these teams will be 3-1 and, at worst, tied for its division lead.
Texans quarterback Ryan Fitzpatrick was the Bills’ starter for most of four seasons, but didn’t live up to the new contract he got from Buffalo. The Texans are his fifth pro team.
He’d be helped if RB Arian Foster (hamstring) can return to the lineup.
The enthusiasm in Buffalo over the sale of the team and the certainty of it remaining in Western New York hasn’t subsided. The zeal around the Bills’ play was dampened a bit by last week’s loss to San Diego.
Tampa Bay (0-3) at Pittsburgh (2-1)
Coming off a 56-14 debacle at Atlanta, the Bucs might settle for something respectable against a team they have fallen to in eight of nine meetings, including the past four. Second-year QB Mike Glennon figures to get his first start of 2014 with Josh McCown bothered by a thumb injury.
Tampa probably will try to run the ball with Bobby Rainey (5.3-yard average) and, the Bucs hope, Doug Martin, who has only nine carries while dealing with a left knee issue that sidelined him the past two weeks.
The Steel Curtain is so tattered at linebacker that Pittsburgh reached into its recent past and signed James Harrison.
Jacksonville (0-3) at San Diego (2-1)
Third overall draft pick Blake Bortles steps in to start at quarterback for Jacksonville after an impressive relief outing: 223 yards and two TD passes vs. Indy in a game that was already decided. Considering two of his top targets also are rookies, look for Bortles to face a multitude of blitzes and confusing defenses.
San Diego isn’t that far from being undefeated, and has only one giveaway. Tight end Antonio Gates, healthy at last, looks like he’s in his prime, and the Chargers have seven sacks while yielding only two.
Detroit (2-1) at New York Jets (1-2)
A third straight NFC North opponent for the Jets, whose cornerback situation is shaky. That could mean a few romps to the end zone for Calvin Johnson and Golden Tate unless Rex Ryan comes up with ways to get pressure on Matthew Stafford. The Jets couldn’t manufacture much of that against Chicago on Monday night.
Detroit’s defense ranks first in yards allowed and the Lions have given up just 45 points, tied with Arizona for stinginess.
Atlanta (2-1) at Minnesota (1-2)
The Vikings’ promising start has collapsed in the wake of Adrian Peterson’s child abuse case and some key injuries. QB Matt Cassell is done for the season (broken left foot), meaning first-round pick Teddy Bridgewater gets the call. Guard Brandon Fusco (pectoral) will also be out for the rest of the year, and tight end Kyle Rudolph had surgery to repair a sports hernia.
The Falcons still struggle running it, but, man, can they pass the ball. Matt Ryan already has thrown for 965 yards and seven TDs, and Julio Jones is averaging 15.9 a reception, with three touchdowns.