No. 6 Texas A&M guts out OT win over Arkansas 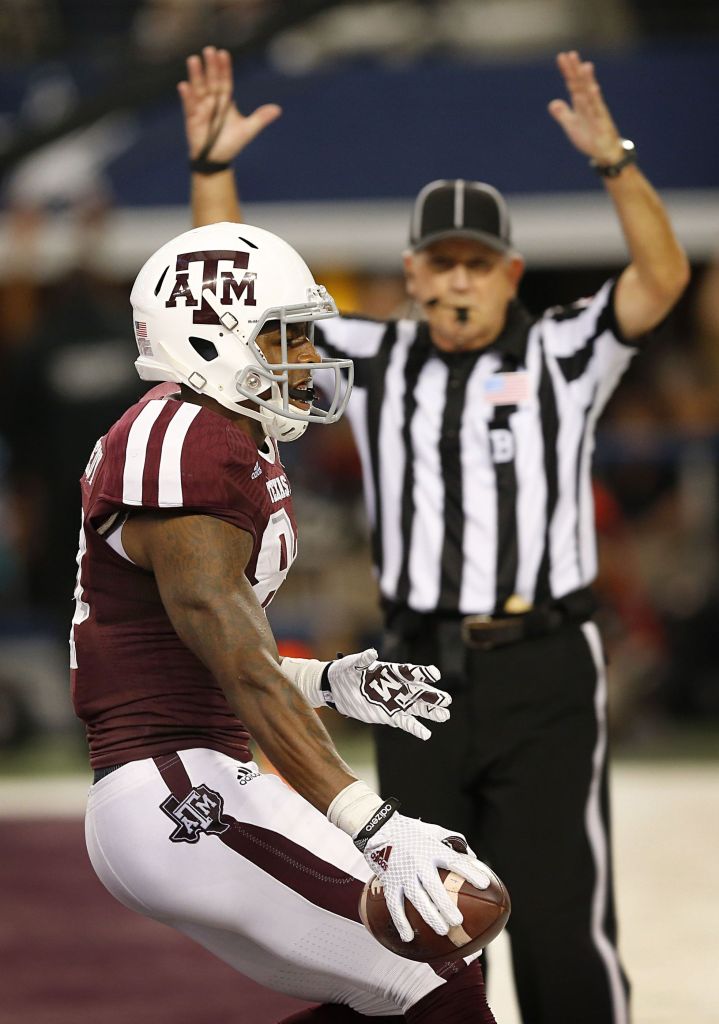 ARLINGTON, Texas (AP) — Kenny Hill threw for 386 yards and four touchdowns, with a 25-yarder to Malcome Kennedy on the first play of overtime, and Texas A&M rallied from a two-touchdown deficit to beat Arkansas.
The Aggies (5-0, 2-0 Southeastern Conference) trailed 28-14 going into the fourth quarter before Hill threw two long scoring passes — 86 yards to Edward Pope and 59 yards to Josh Reynolds, the later with 2:08 left only two plays after Arkansas missed a field goal.
Hill completed 21 of 41 passes.
No. 12 Georgia 35, Tennessee 32
ATHENS, Ga. (AP) — Todd Gurley ran for a career-high 208 yards and two touchdowns, including a 51-yarder in the fourth quarter, and Georgia rallied to beat Tennessee.
Gurley had another brilliant showing, scoring on a 1-yard leap in the second quarter before breaking straight up the middle for a TD with 9 1/2 minutes remaining.
No. 5 Auburn 45, La. Tech 17
AUBURN, Ala. (AP) — Nick Marshall threw three touchdown passes and rushed for 105 yards for Auburn.
Quan Bray caught a 44-yard touchdown pass and returned a punt 76 yards for another score in a 53-second span of the fourth quarter. Those plays turned a competitive game into a route.
No. 9 Michigan St. 56, Wyoming 14
EAST LANSING, Mich. (AP) — Jeremy Langford ran for 137 of Michigan State’s 533 yards of total offense.
Connor Cook was 6 of 8 for 109 yards and two touchdowns, helping Michigan State score more than 50 points in consecutive games for the first time since 1978.
No. 16 Stanford 20, Washington 13
SEATTLE (AP) — Kevin Hogan scored on a 5-yard run with 4:29 remaining, and Stanford took advantage of a poorly timed fake punt to hold off Washington.
Stanford dominated statistically, but was still tied midway through the fourth quarter because of continued problems in the red zone. That’s when Washington coach Chris Petersen took a gamble running a fake punt on fourth-and-9 at the Huskies 47. The play was stuffed and Hogan scored on the ensuing possession.
No. 19 Wisconsin 27, South Florida 10
MADISON, Wis. (AP) — Melvin Gordon rushed for 181 yards and two touchdowns, and Wisconsin overcame a sluggish start to beat South Florida.
Gordon scored on carries of seven and 43 yards on the Badgers’ first two drives of the second half after running room finally opened up for the star tailback.
The Bulls (2-3) put up an admirable effort in their first road contest of the year, getting to 17-10 midway through the third quarter on Rodney Adams’ 26-yard touchdown run off a reverse.
Wisconsin (3-1) inched away in the final 20 minutes to extend its nonconference home winning streak to 32.
No. 25 Kansas state 58, UTEP 28
MANHATTAN, Kan. (AP) — Charles Jones ran for three touchdowns, Tyler Lockett returned a punt for another score and Kansas State romped past UTEP on Saturday.
DeMarcus Robinson and Jake Waters also had touchdown runs, and Waters threw for 209 yards and another score as the Wildcats (3-1) finished nonconference play.
UTEP (2-2) managed one first down and 23 yards of offense in the first half, when Kansas State raced to a 31-0 lead. Running back Aaron Jones, the nation’s second-leading rusher, was held to 47 yards. Jameil Showers threw four TD passes for the Miners, all with the game well out of reach.