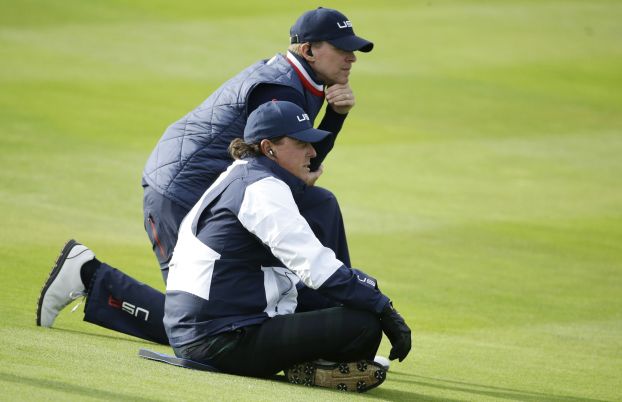 Mickelson takes to the sidelines in Ryder Cup

GLENEAGLES, Scotland (AP) — The tee shots were in play, and Phil Mickelson strode down the first fairway in the Ryder Cup like he has done so many times before. He was in full uniform. He wore golf shoes.
He wasn’t a player on Saturday. He was a cheerleader.
For the first time in 10 appearances at the Ryder Cup — the most of any American in history — Mickelson spent an entire day without hitting a single shot. U.S. captain Tom Watson sat him out in the morning, and then he chose not to play Mickelson and Keegan Bradley in the afternoon.
The last time Mickelson played only two matches going into the final round was in 1995 at Oak Hill when he was a Ryder Cup rookie. Asked to comment as he walked down the fairway to watch, Mickelson said, “Whatever it takes to win.”
When asked whose decision it was not to play, Mickelson smiled and kept walking.
Mickelson and Bradley rallied to take down Rory McIlroy and Sergio Garcia in the opening session of fourballs on Friday, but they lost badly in foursomes when Bradley couldn’t keep it in the short grass and Mickelson couldn’t make enough putts.
“They didn’t perform all that well yesterday afternoon,” Watson said.
The decision backfired on Watson when he sent out Rickie Fowler and Ryder Cup rookie Jimmy Walker for a fourth straight match Saturday afternoon. Graeme McDowell and Victor Dubuisson sailed to a 5-and-4 victory.
Mickelson asked to play in foursomes on Friday and Watson agreed. Lefty asked to play on Saturday and Watson turned him down.
“He said, ‘We can get it done,’” Watson said. “I said, ‘Well, the way this golf course sets up, the four teams I put out there give us the best chance.’ He lobbied again. He text me. He said, ‘Give us a chance.’ I had to tell him no.”
Mickelson, a five-time major champion, has not won a tournament since the British Open last summer at Muirfield, though he finished one shot behind McIlroy in the PGA Championship last month at Valhalla.
Bradley has gone more than two years without winning, and he had to rely on a captain’s pick to make this team.
When asked if he regretted not playing Mickelson, Watson shot back, “No.”
Later, he was asked if he had any regrets at all.
“When I look back on it, maybe playing the players too much would be one regret,” Watson said. “They got a little tired. And that certainly is something that I thought they could handle, and maybe I regret not understanding that they couldn’t handle it.”