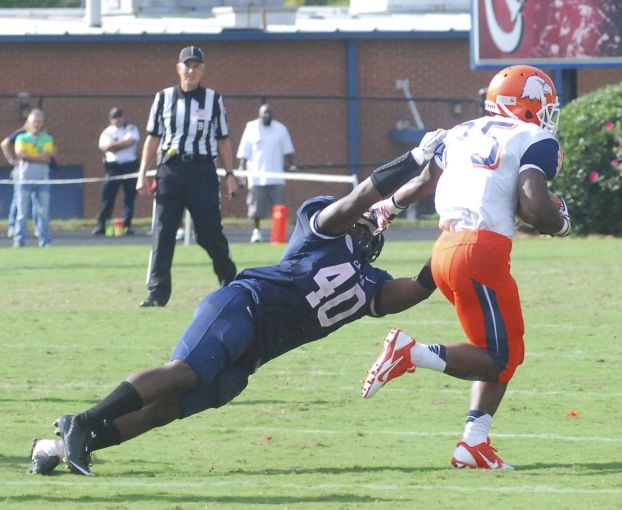 Indians fall short despite big day by the offense

SALISBURY — Mike Sheehan threw for 387 yards, a figure that will normally lead to jubilation and celebration, but this wasn’t an ordinary Saturday on Kirkland Field at Shuford Stadium.
Carson-Newman was in town, and the Eagles got four rushing TDs from QB De’Andre Jones and boarded their buses with a 35-33 SAC victory.
“We never panicked, and we fought as hard as we could fight in some tough situations,” Catawba head coach Curtis Walker said. “But if you’re gonna beat Carson-Newman, you’ve got to play at a top level. We made too many mistakes.”
Mistakes and all, Catawba was a millimeter away from a signature victory.
A 35-yard Catawba field goal swerved wide left late in the first half. Catawba just missed on a two-point conversion when wide-open tight end Tyler Hamilton caught the ball on the chalk at the back of the end zone.
Then there was the Carlos Tarrats’ fumble at the goal line. Tarrats grabbed a pass from Sheehan in the first quarter, and zig-zagged through a maze of defenders. He appeared to reach the goal line when linebacker Sha’heem Stupart punched the ball out of his arm from behind. The ball skidded out of the back of the end zone for a touchback.
“I know my foot broke the plane of the end zone, so the ball should have as well,” Tarrats said. “But give him credit for punching the ball out. That’s on me.”
Eyewitness Gary Williams, another Catawba receiver, was blocking downfield for Tarrats.
“It was very close, but I thought Carlos crossed the goal,” Williams said.
Catawba (2-2, 1-1) already trailed 14-0 when that deflating play occurred. Instead of leading the Indians to folding, the odd fumble was a rallying point. The Indians outplayed the Eagles (3-1, 2-0) the rest of the way.
“Carson-Newman is not a team you want to fall behind,” Sheehan said. “The way they can grind the ball and kill the clock, you know you need to score a touchdown every time you touch the ball. We were a little unlucky and we made some mistakes early, but then we went to work.”
Momentum changed when Kyle Kitchens forced and recovered a fumble to give the Indians the ball near midfield, and Sheehan capitalized with a TD pass to Tarrats to put Catawba on the board.
Sheehan found Tarrats with another TD pass that was called back by a holding penalty, but Sheehan went right back to Tarrats on a third-and-11 for a 30-yard gain to the Carson-Newman 2,
“I was working my way around two defenders at times,” Tarrats said. “When it was one-on-one, I felt like I could make a big play every time.”
Sheehan got the TD on a run, and Catawba trailed 21-14 at the break.
Two third-quarter field goals by Catawba’s Chad Hollandsworth were sandwiched around a 76-yard Carson-Newmam scoring drive, and the Indians trailed 28-20.
Catawba cornerback Mark McDaniel defended a third-down pass play well, and Carson-Newman finally had to punt for the first time late in the third quarter.
Catawba quickly drove 80 yards to score. The key play was Sheehan’s 24-yard, over-the-middle completion to Hamilton on third-and-18. Cary Littlejohn ran 7 yards for the TD that made it 28-26, but that’s when the two-point conversion pass to Hamilton failed. There was 12:18 left to play.
Catawba’s defense got a stop, but Carson-Newman got one as well. On fourth-and-7 at the Carson-Newman 41, a Catawba fake punt didn’t go smoothly and didn’t fool the Eagles.
Carson-Newman then produced its sharpest offensive play, with Thomas hitting TraShaun Ward in stride on a post pattern for a 30-yard TD. The PAT made it 35-26 — a two-score lead — and only 6:31 was left.
A poised Sheehan directed a nice drive, covering 75 yards, and he calmly hit Williams with the 6-yard TD pass that made it 35-33 with 3:02 remaining.
Catawba kicked off deep, but it didn’t get the ball back. The backbreaker was a 20-yard, tackler-dragging carry by Damian Baker. Catawba burned its last two timeouts, and it was over.
Catawba had 119 rushing yards and finished with 506 yards of offense to 486 for the Eagles.
Tarrats had six catches for 147 yards, while Hamilton had five catches for 86. Linebacker Jamal Lackey made 13 tackles, while linebacker Jason Taylor, playing despite a groin injury, had 10.
Jones rushed for 104 yards and threw for 173 for the Eagles, while Andy Hibbett rushed for 118 yards.
“I looked in our defensive huddle and there were four true freshman in there,” Walker said. “That speaks well for our future, but youth wasn’t on our side today against an experienced team. Still, we learned a lot. As coaches and players we learned a lot.”
Follow Mike London on Twitter at @mikelondonpost3.