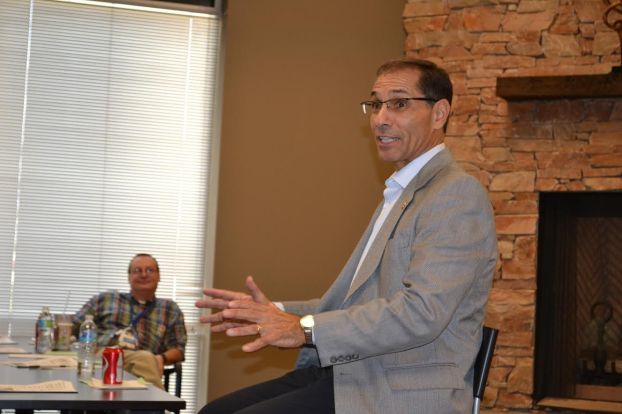 If you need to hire someone for a position in your organization, do you put an ad in the paper? Talk to the candidate in your office? Ask for three references?
There’s a better way, according to John Formica, who bills himself as the ex-Disney guy. Formica spoke to a group in Charlotte recently that included employees from Lutheran Services Carolinas, PACE at Home, and the Lutheran Homes of South Carolina.
Formica has more than 25 years’ experience managing hotels, resorts and assisted living communities. He worked at Walt Disney World Resort in Orlando for 10 years and now, as a speaker, Formica takes the Disney model outside of the theme park and applies what he learned to other businesses. He teaches them, among other things, “how to find, interview and hire magical people.”
“Your job as a manger is to get things done through people,” Formica says. Customers care about “who cared about them” and who made a difference — and managers need to find and hire people who can do that.
Formica says that Jim Collins’ book “Good to Great” offers three valuable pieces of advice for managers: Get the right people on the bus, get the wrong people off the bus, and make sure those on the bus are in the right seats.
Formica shared his “80-20” rule for interviews: The candidate should do 80 percent of the talking. Your job as an interviewer, Formica says, is to “find out what’s wrong” with candidates in order to eliminate those you don’t want. Pay attention to your first impression, he says, because the candidate will be the best he or she is ever going to be during the interview.
So how do you attract the right candidate? Formica isn’t a fan of relying solely on the newspaper ad, which leaves the employer in the passive position of hoping and praying the right people show up.
Everyone in an organization should always keep their eyes and ears open for good candidates by developing relationships and networking. “When your radar is out there looking for good people, they will show up,” says Formica, who adds that looking for good people to fill the organization should be everybody’s job. To that end, he advocates giving employees bonuses for successful referrals.
Formica shared a story about a woman who worked in a coffee shop he frequented. She noticed he was a regular customer and gave him the kind of extraordinary service that made a huge impression on him. Eventually, she accepted his offer of a job and began working at the front desk of a Hyatt hotel. Before long, she’d been named Employee of the Year — for the entire 450-hotel chain. He was able to hire the perfect person because he was constantly looking for good people, Formica says.
Formica advises ditching the standard interview format. “Never interview in an office,” he advises. In a different environment, you can learn a lot from how a candidate interacts with others. It’s much easier to tell if a candidate is outgoing and bubbly, for example, if you can see his or her behavior outside the office. In interviewing housekeepers, Formica says he liked to walk around with the candidates during the interview, in order to see if they had physical stamina.
Formica advocates asking open-ended interview questions based on behavior, such as: “Share an experience where you didn’t get along with others and explain how you handled it.” Posing open-ended questions to references is also a great way to get information about the candidate, he says.
Formica advises employers not to fall in love with a resumé and notes that the candidate best-suited for the job might not necessarily be the most qualified in terms of experience and education.
References are important, Formica says, and putting the energy into asking them probing questions can prevent mistakes in hiring. While the normal employer might ask for three, Formica says he requests 11. If a candidate is serious about a job, they won’t have a problem with it, Formica says.
Checking references, for Formica, is so important that he’ll even visit a candidate’s previous workplace in order to get insight.
LSC Director of Special Projects Jill Nothstine said that in light of Formica’s advice, some LSC managers are “looking at their employees differently” and considering whether they are in the right roles for their personalities and skills.
LSC Controller Susan Miller says she plans to ask more open-ended questions during interviews and pay attention to the “80-20” rule, with the job candidate doing most of the talking.
Anita Street, assistant director of nursing at Trinity Ridge, a skilled nursing home in Hickory, says she’s already put into practice some of what she learned.
“I just interviewed three people,” she said. “I shut my mouth and let them talk. If they gave a ‘yes’ or ‘no’ answer, I gave them an open-ended question. And it worked.” Street says Formica’s approach elicited more information and gave her a better sense of whether she’d want the person to take care of someone she cared about.
For more about John Formica, go to www.johnformica.com.

Photographer David Lamanno has a way with photos — the old-fashioned way. He loves the challenge of using early photography... read more