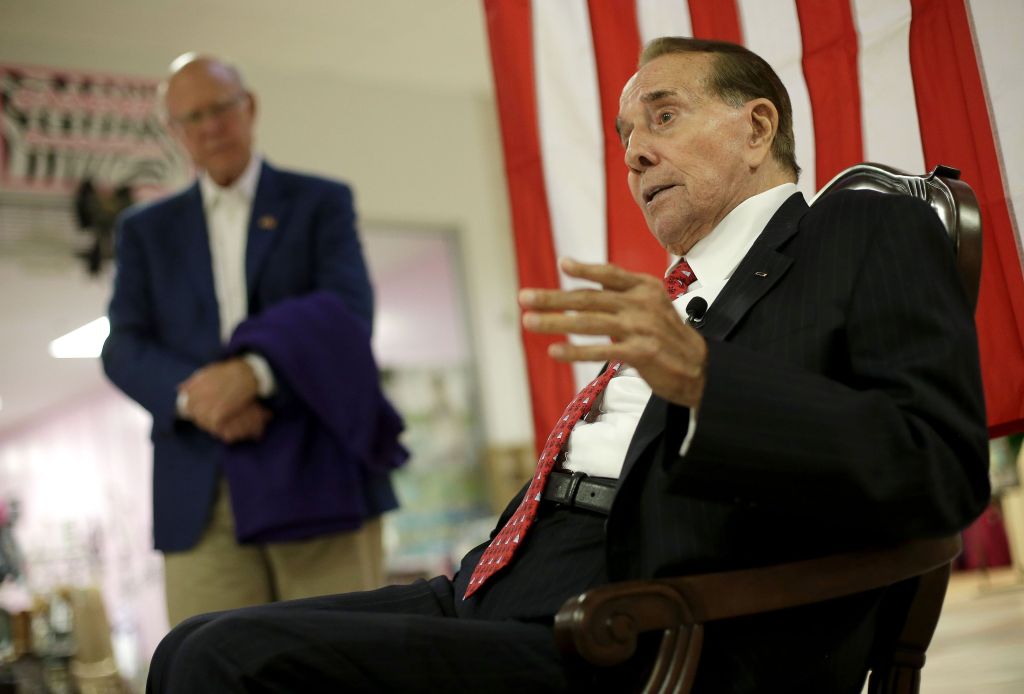 SALISBURY — It’s easy to say Elizabeth Dole never stops, but neither does her husband, Bob.
Still one of Washington’s more powerful couples, the Doles always seem to be consumed by their latest projects. For Elizabeth Dole — the former U.S. senator, labor and transportation secretary and American Red Cross head — the initiative now is her foundation’s work to provide help for the caregivers of the country’s wounded warriors.
Meanwhile, 91-year-old Bob Dole has returned to barnstorming his native state of Kansas. Over nine different trips to Kansas — he already has made eight — Bob Dole has been trying to visit all 105 counties to say thanks to voters who supported him as a U.S. House member, then a U.S. senator.
Dole served 38 years in Congress overall, was the longest serving Senate Republican leader and, of course, was the 1996 GOP nominee for president.
What makes his trips to Kansas more remarkable is that Dole has been ailing. He still has healing issues for one of his replacement knees, so he’s not as mobile as he would like.
But Elizabeth Dole says her husband stays with all the former constituents who come to see him “until the last light is out.”
When he travels to Kansas without Elizabeth, Dole takes has a staff person and an assistant to help him get from place to place.
When Elizabeth Dole goes along, he affords her five to 10 minutes to talk about her foundation and what it’s trying to accomplish for the “hidden heroes,” the often overlooked caregivers of wounded warriors.
On their last Kansas trip together, the Doles stayed for four days, hitting up to five counties a day. At most stops, Dole has arranged for a place for people to come and meet him. After he says a few words, the rest of the time is filled with handshakes, conversations about the old days, autographs and lots of picture-taking.
Elizabeth Dole said Bob Dole seems energized by the trips.
“He’s full of optimism,” she said. “He never complains. His spirit is so great.”
When Bob Dole first brought up the idea of his making the Kansas trips — the Doles spend most of their time at their Washington, D.C., apartment — Elizabeth said, “I thought it was great, but I was worried, because he does have a disability.”
But she saw how that first trip back really gave him a spark.
Elizabeth Dole was in Salisbury over the weekend for her Boyden High Class of 1954’s 60th reunion, held Saturday night at the Country Club of Salisbury.
A group of classmates also got together Friday night at Roy Campbell’s house where everybody was hugging, kissing and catching up,” Dole said.
Bob Dole was just returning to Washington from his eighth Kansas trip Friday as Elizabeth was heading south for Salisbury.
As she relaxed at her South Fulton Street home Saturday afternoon prior to the reunion gathering, Elizabeth Dole had a fire going in the den and Cheerwine ready to serve for her guests.
When she returns to Washington, she’ll be greeted by the couple’s two dogs, 4-year-old Blazer and 14-week-old Leader III, carrying on their long legacy of miniature schnauzers.
Leader II died about a year ago.
Elizabeth located Leader III in Maryland and surprised Bob by carrying the then 10-week-old puppy into his birthday party this summer at his Washington law firm.
“Bob looked up, and he was like a 4-year-old,” Elizabeth Dole said.
She reports Leader III is about 75 percent house-trained, but getting better.
Contact Mark Wineka at 704-797-4263.