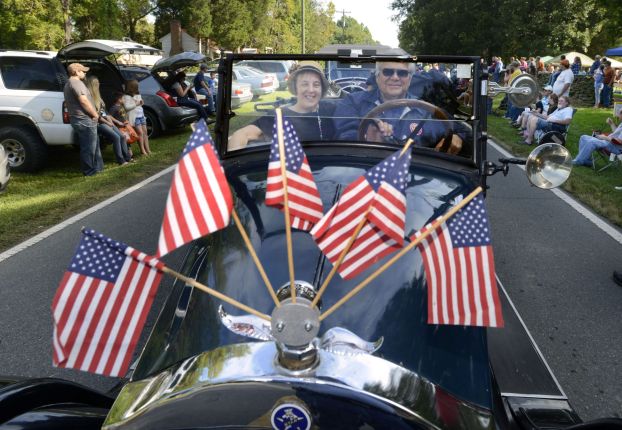 A golden celebration in Gold Hill

Though rock bands jammed in the background and airplane flybys whizzed overhead at Historic Gold Hill’s 25th annual Founder’s Day on Saturday, the town still looked much like it did 160 years ago when the mining village was in its heyday. A blacksmith forged metal as actors in 19th century garb cooked over a fire, and families strolled down the village’s wooden sidewalk into the E.H. Montgomery General Store for a taste of stick candy.
Founder’s Day is a celebration of that living history.
“We’re here to celebrate the culture and history of this gold mining boom town,” said Vivian Hopkins, vice president and director of education for the Historic Gold Hill and Mines Foundation. “It’s our biggest Founder’s Day yet.”
Visitors who hopped on the “History Hay Ride” on a new section of the 74-acre historic park’s Rail Trail got an up-close look at the Randolph Mine Shaft, the Gold Hill Pond which provided water for the mining operations and the Powder House where dynamite was stored. The Rail Trail was extended just this spring to offer access to the three historic sites.
Also new this year was an extensive kids’ play area hosted by the Awana Club from the First Baptist Church of Gold Hill. Children had their faces painted and played games, including corn hole, balloon pop and ducks in a pond.
“We wanted something especially for the kids,” said Hopkins.
At the amphitheater, a lineup of musicians and performers — more extensive than in past years — entertained crowds with everything from ’80s rock to gospel to clogging. An estimated 60 vendors participated, up from 45 vendors in past years.
Vendor Deb Goodman from Salisbury was pleased to share her art — dichroic glass jewelry — in the historic setting. “I love to see people from outside experience the heritage we have in our back yard,” Goodman said.
Salisbury resident Marietta Smith was eager to peruse vendors’ wares. “I’m looking for some top quality arts and crafts. Everything I’ve seen looks very nice,” she said.
An airplane flyby performed by the local group Team AeroDynamix signaled the start of the morning parade. New additions to this year’s parade included the Durant Auto Club’s antique cars — all 1920s models of Durant-made automobiles — and Darrell Kluttz riding a Brahman steer to conclude the parade.
“I think the whole county comes out for the parade,” said Rick Shulenburger, board of directors member for Historic Gold Hill. “We’ve got granddaddies riding on lawn mowers, pulling their kids on a trailer. It’s just a fun parade.”
At the “Living History” area, the 63rd N.C. Troops recreated an 1864 Civil War military camp. In the evening the group reenacted a war skirmish.
David James of Concord was dressed as a soldier and slept overnight at the “Living History” camp on Friday night. The 63rd N.C. Troops consider Gold Hill Historic Park to be their home base, James said. “Three or four times per year we come to the park to practice, do drills and camp.”
In the historic Village of Gold Hill, a banjo and guitar duo provided a musical back-drop for visitors exploring the town’s shops.
“It’s like stepping back in time onto a set from an Old West movie. And it’s not a set, it’s authentic,” said Hopkins. “People are amazed when they come here.”
Hopkins and her husband, Glenn, operate the E.H. Montgomery General Store in the historic village, one of two original village shops dating to 1840. But their ties to Gold Hill go much further back than that.
“Glenn’s great-great-great-grandfather Andrew Troutman was the first to discover gold here in 1824 on his farm, not far from where we stand today,” Hopkins said.
Hopkins was there for the first Founder’s Day in 1989. It wasn’t called Founder’s Day then, she said. The event was held at the Gold Hill fire station. Bob Drew, parks committee chairman for Historic Gold Hill, was there too, and recalled the lively street dances and meals of Brunswick stew and pinto beans served at the first Founder’s Day.
“That event 25 years ago spawned restoration efforts all over Gold Hill,” said Hopkins. “It’s exciting how far we’ve come in that time.”
Recent capital improvements over the past five years include a new baseball shelter, the paving of the park’s entrance and general maintenance projects throughout the park.
“Hopefully we’ll have more improvements in coming years,” said Shulenburger.
Historic Gold Hill is located off of Highway 52, 30 minutes from Salisbury. Upcoming events include the Ghost Tour and trick-or-treating in the village shops on Oct. 25, and the Lighting of the Fall Fires on Nov. 22 to kick off the holiday season.

Photographer David Lamanno has a way with photos — the old-fashioned way. He loves the challenge of using early photography... read more