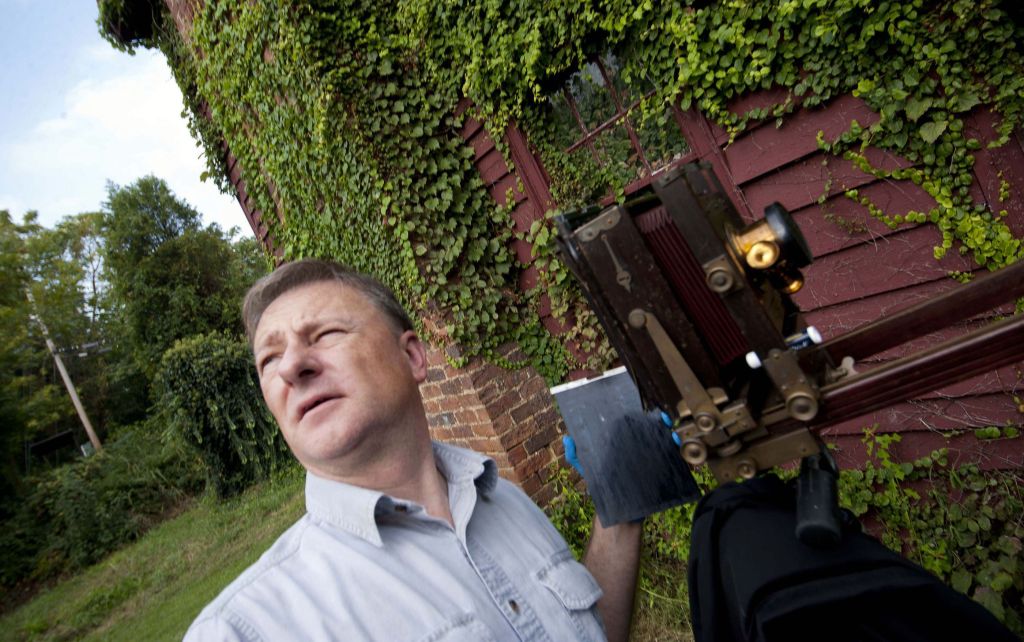 Photographer David Lamanno has a way with photos — the old-fashioned way.

He loves the challenge of using early photography techniques to photograph the world around him.

Sometimes, those tintypes, developed on the spot just minutes after he shoots the image, erase a century or more.

Lamanno now has a partial grant from the Rowan Arts Council to work on his latest photo documentary project — capturing the old places around Rowan that still survive.

“I’ve done a lot of traveling through the county, just hitting the low-hanging fruit I have easy access to,” Lamanno said. “What I want to do is call out to all the folks in the county, particularly if their property has been listed in Davyd Foard Hood’s book to see if they would let me do a follow-up.”

Hood’s book, “The Architecture of Rowan County: A Catalogue and History …” was published in the early 1980s and documented surviving structures from centuries past.

Lamanno has to work fast with his form of photography. He carries a portable darkroom, so when he arrives at a site, he has to get all his chemicals in place, pour the liquid film on the metal plates and allow it to sensitize for a time. He has about 30 minutes to get it all done. Once the silver heats up, he has to call it a day. This summer, that meant as early as 11 a.m.

Now and into October are ideal times for him to get out and finish his work. He wants to have a showing of prints from the tintypes early in 2015.

He also wants to get interest from civic groups, schools and others about the old form of photography.

Lamanno has won numerous photo contests and his photos have been seen in Our State magazine.

For 20 years, he’s been doing large-format photography using large-view cameras, a 5-by-7 version and an 8-by-10. He taught himself about the process and has to order the chemicals from New Mexico, where a supplier caters to “the alternative photographic crowd,” Lamanno said.

Lamanno has made a paste needed in the process, but now uses a two-part solution from the supplier.

He makes tintypes in the field, then scans them in to a computer and can make needed corrections and prints of each one.

Lamanno says his interest in wet-plate photography goes back to his childhood, when he saw Civil War photographs. “I devoured those Time-Life books. … The photos captured my imagination. Once I started with the large view, I wanted to take the next step.”

After a workshop in Philadelphia, “it’s been trial and error ever since.”

He speaks wistfully of the days when photographers would load up their wagons and travel from place to place making photographs. “Now I have a little black pickup.”

He’s been to Kerr Mill, around the Woodleaf area, St. Andrew’s Church, done a lot of scouting in the Morgan Township area and Providence Township, “also up toward the Scots-Irish area. It’s really nice there, and I’ve scouted a little around Gold Hill.”

He’s looking for people who have historic properties, an old farmhouse, outbuilding, or the like to contact him at 704-431-0941 or david@photography1851.com.