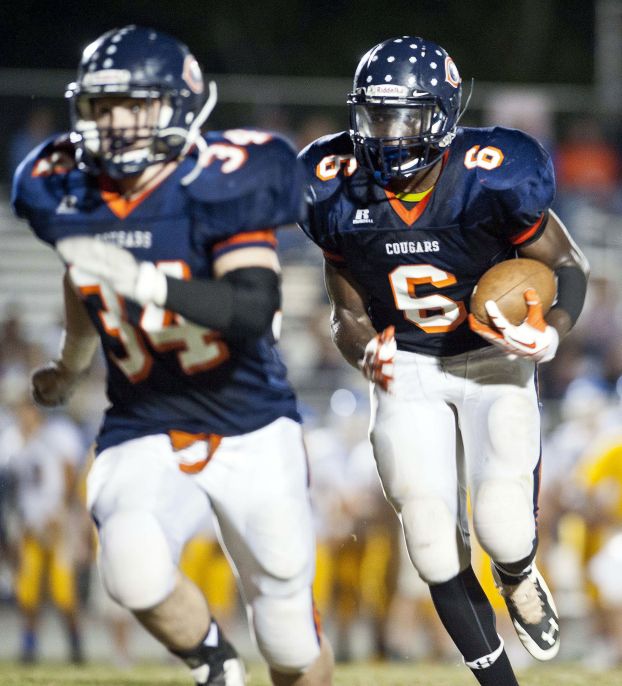 CHINA GROVE — Mount Pleasant running back Cody Reece stole the show in Friday’s 31-15 non-conference victory over the host Cougars. Half plowhorse and half thoroughbred, Reece turned one-yard stuffs in 7-yard gains and 10-yard breakouts into long-distance misadventures.
“I think he’s just like Brandon Sloop,” Carson coach Joe Pinyan said. “He’s got a low center of gravity and runs hard. He doesn’t like to come down, just like Brandon. If we had those two in the same backfield, they’d really look good side by side.”
Reece bumped and bruised and spun and slid his way to 284 yards and a pair of touchdowns for the Tigers (3-2), winners of three straight.
“It was definitely my line giving me seams,” the junior said. “And if there weren’t seams, they pushed people out of my way.”
Carson’s overworked defense yielded 361 yards — all but 69 of it on the ground. But Mount Pleasant was “a lot bigger in person than on film,” according to Pinyan. Its beefy offensive line seemingly had its way with the Cougars.
“(Reece) is a good runner, no question about it,” said Carson defensive tackle Alex Lyles. “But we made a few mistakes on gap responsibilities. That big line made it harder to see him. He just sort of hid behind them.”
Defending was a chore from the start for Carson (2-3, 1-1 SPC). On the first play from scrimmage Reece took a handoff from quarterback Austin Parker and broke off a 37-yard run. Three snaps later fullback Clayton Horn walked into the end zone on a 1-yard smash. The game was only a minute and 32 seconds old.
“I feel like this was our best game of the season,” said Mt. Pleasant coach Michael Johns. “We were coming off a bye week and two weeks of great practices. We were ready for this.”
Carson wasn’t. On the guests’ second possession Parker steered the Tigers 28 yards in seven plays, including Horn’s 7-yard pickup on fourth-and-1. On first-and-10 Reece swept around the right side on a 20-yard TD run, providing a 15-0 lead.
“It was a counter play called by Coach (Randy) Kiser,” Reece said. “He told me it was going to be a big play. He said they were going to bite on it and they did.”
Carson closed within one score late in the opening period when Sloop and teammate Darren Isom got untracked. Isom picked up 26 yards on the Cougars’ second possession and Sloop capped the drive with a 25-yard touchdown burst after escaping a jam at the line. The Cougars were down 15-7 at the end of the first quarter.
“We switched some things up and ran some ISO this week,” Sloop said after rushing for 143 yards and his ninth TD of the year. “And we were getting 8 yards a carry off of it. A lot of times you don’t see the hole. You just put your head down and trust your line.”
By halftime it was 18-7 Tigers, though Carson squandered a good opportunity in the closing moments.
“There were actually two times before the half that we could have scored,” Pinyan indicated. “The previous possession we were fourth-and-short and ran the quarterback sneak, and he should have gone to his left and he went right. I still haven’t figured that one out.”
On its final possession of the half Carson reached the Mount Pleasant 21 before stalling. The Cougars nonetheless inched within 18-15 midway through the third period when Isom ran two yards for a TD, finishing off an impressive 11-play, 80 yard drive.
But Mt. Pleasant stretched its lead late in the quarter, then secured the win when Reece went 89 yards on a third-and-7 play in the game’s final minute.
“It was tough,” Lyles said. “We made too many mental mistakes, but it’s all fixable. Through it all, we know this doesn’t hurt us in the conference standings. We’re still moving forward.”

ATLANTA (AP) — The Braves dodged another shutout loss. That didn’t take away the ugliness of the final home loss... read more