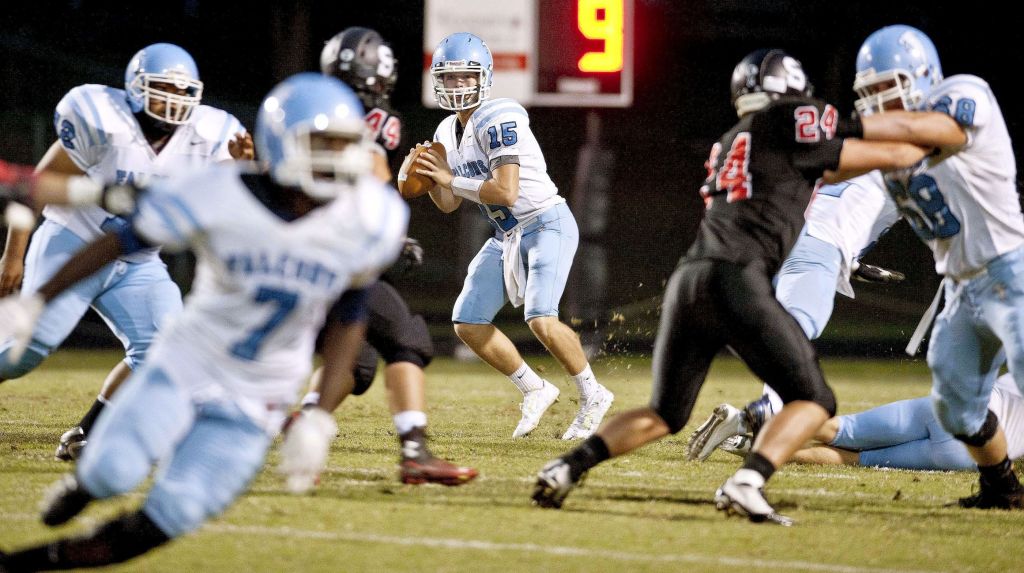 LANDIS — It was an epic defensive struggle that had heartache written all over it. In the end it was a blocked punt that provided the dagger.
After battling to a stalemate for most of three quarters, West Rowan finally got the breathing room it needed against South Rowan Friday night to escape with a 21-13 conference win. An explosive special teams sequence by Falcon sophomore L.J. Robinson in the final quarter proved to be the difference.
West Rowan (4-1, 2-0 SPC) was clinging to a 13-6 lead with just over 10 minutes left when Robinson broke through to block a punt by Raider Marshall Long near midfield. The ball caromed toward the South Rowan end zone where Amos Duncan tried to scoop it up but couldn’t get the handle. Robinson was right beside him, however, picked it up at the 4 and dove into the end zone.
Robinson capped it off by taking a handoff on a fake extra point attempt and scoring to make it 21-6.
“The mistakes we made in our kicking game let them stay in it,” West Rowan coach Scott Young noted. “Then the kicking game finally let us stretch it out to a two-score lead. That was huge for us”
It was huge because the host Raiders (2-3, 1-2 SOC) had already scored on a blocked punt of their own in the first half. They got enough of another one in the late fourth quarter to set them up at midfield. Five plays later, quarterback Heath Barringer hit Qwan Rhyne with a 33-yard TD strike to cut the lead to 21-13 with 4:56 left.
South Rowan’s defense held and gave the offense one final chance with just over two minutes left. But three incomplete passes ended the effort, and the Falcons were able to run out the clock for the win.
“We are just so close,” South Rowan coach Jason Rollins said. “The little things keep biting us when we are moving the ball. It changes everything when that happens.”
But Rollins had special praise for the defense as well as the special teams that had the two blocked punts and an interception.
Up until the big special teams play of Robinson in the final period, West Rowan was depending almost exclusively on versatile running back Harrison Baucom. He scored the team’s first 13 points himself on a 4-yard run in the first quarter followed by a 5-yard TD run to open the fourth quarter. Then he kicked the extra point.
Baucom, the county’s leading rusher, carried 26 times for 153 yards against South Rowan and had to earn every one of them against the Raiders’ defense.
“I tell you what, those were hard earned yards,” Baucom said. “It was tough out there against a good defense.”
South Rowan tied the score at 6 late in the second quarter with its first blocked punt. West Rowan was backed up toits 6-yard line, and Baucom had to punt from the end zone. Senior lineman Grex Urey broke through to block it, and Trey Littlejohn scooped it up at the 4 and ran it in.
The score stayed tied through a rugged third quarter that saw both teams get key interceptions to stop a a threat. Littlejohn got the pick for South Rowan then on the next sequence West Rowan’s J.T. Saunders intercepted at the goal line and ran it out to midfield.
“Some nights you have to grind it out like we did,” Young said. “We didn’t complete a down field pass all night and you can’t win like that. But we are glad we did.”