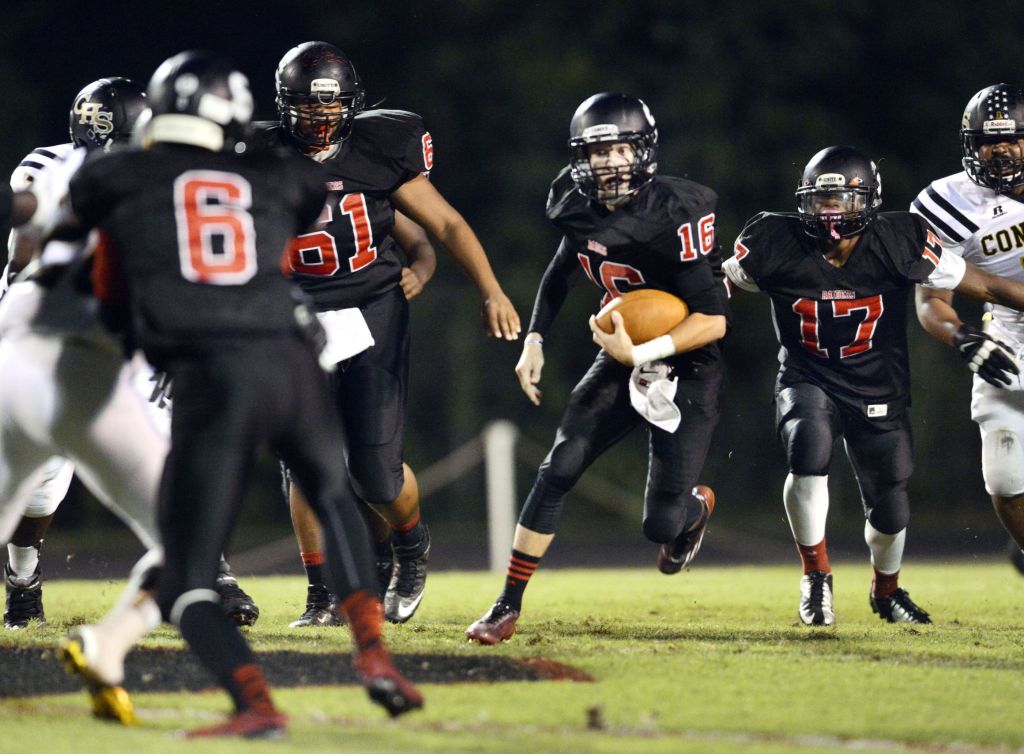 West Rowan is at South Rowan and East Rowan is at Concord in SPC matchups. North Rowan is home against Forest Hills in its last tuneup for the CCC. A.L. Brown starts Mecka play at North Meck, and Davie starts CPC play at home with a bang against high-powered Reagan.
The sleeper game is Mount Pleasant at Carson. It’s not a league game, but it might be the best matchup of the night. Salisbury is off and can enjoy last week’s win a little longer.
West Rowan (3-1, 1-0 SPC) at South Rowan (2-2, 1-1 SPC)
We’re about to find out if it’s really a new day at South Rowan.
West Rowan has physically overpowered and overwhelmed South Rowan recently. Not only have the Falcons won the last 13 meetings, there hasn’t been a game decided by less than four touchdowns since 2003.
It was 65-7 a year ago and 66-7 in 2010.
South Rowan’s defense is much better than it has been, and Hezekiah Banks — West Rowan’s mammoth offensive lineman — is on the shelf, so the Raiders have at least a fighting chance to make it a ballgame. Still it’s hard to imagine West Rowan not winning and Harrison Baucom not rolling for 150 rushing yards.
South Rowan coach Jason Rollins is 0-8 against the Falcons. West Rowan coach Scott Young is 14-2 against the Raiders.
West Rowan has scored in 160 consecutive games, one of the state’s longest streaks.
East Rowan (2-3, 1-1 SPC) at Concord (4-0, 2-0 SPC)
Concord owns league wins against Hickory Ridge and South Rowan. East Rowan won against Cox Mill but lost 48-21 at Carson a week ago.
Concord is ranked fifth in 3A and running back Rocky Reid is doing what you’d expect a state player of the year candidate to do. He had 215 rushing yards in last week’s 35-21 win against South Rowan.
East Rowan is led by quarterback Samuel Wyrick, who is one touchdown pass shy of C.M. Yates’ school record of 50.
East Rowan first-year head coach Kenneth McClamrock assisted Concord coach Glen Padgett for many years. Unfortunately, the Mustangs are pretty banged-up.
Concord owns an overwhelming edge in the all-time series — 37-3-1. East Rowan won in 1969, 1979 and 2009.
Forest Hills (2-3) at North Rowan (3-2)
Forest Hills has beaten Anson and Piedmont, while losing to Weddington, Pageland (S.C.) Central High and Cuthbertson.
North Rowan won 29-3 against Providence Grove last week to end a two-game skid. North Rowan dominated defensively, jumped ahead 28-0 at halftime and romped 34-7 against Forest Hills last season in Marshville.
That was the first time the schools played. North Rowan standout running back Jareke Chambers quarterbacked the Cavaliers in that game with Alexis Archie injured.
Chambers has rushed for 653 yards and is third in the county in yards per game. Archie is second in the county with 832 passing yards and has 10 TD passes.
Forest Hills has been traditionally strong and won a state title in 1984, but it was only 6-7 last season.
Mount Pleasant (2-2) at Carson (2-2)
Mount Pleasant has been coached by former East Rowan assistant Michael Johns for many years, and his teams have generally been strongest on defense.
In 2005, a 15th-seeded Mount Pleasant team coached by Johns upset a second-seeded Salisbury team coached by Joe Pinyan 19-14 in the first round of the 2AA state playoffs.
Pinyan’s Carson team won 10-3 at Mount Pleasant a year ago, with Darren Isom scoring a late TD. That was the first time the schools had met in football.
Mount Pleasant has beaten Cox Mill and Robinson and lost by less than a touchdown to Concord and Central Cabarrus. Those scores are meaningful because Concord and Central Cabarrus may be the SPC’s best.
Carson has lost to Central Cabarrus and North Rowan, while beating Salisbury and East Rowan.
With Brandon Sloop and Isom, Carson is the top-rushing team in Rowan County. Sloop and Isom are givens, but the keys for coach Joe Pinyan’s Cougars in this matchup are good decisions by young QB Andy Lear and another stout effort by an improving defense.
Davie County (4-1) at Reagan (4-1)
It’s a CPC opener. Davie County is 4-1 all-time against Pfafftown Reagan. The loss was 45-37 last year.
Reagan QB Jake Easter is a prep version of Johnny Manziel and was the CPC Offensive Player of the Year in 2013. Davie running back Cade Carney was the CPC Offensive Player of the Year in 2012 as a freshman and is expected to return to the lineup after sitting three games with a knee injury.
It will be a surprise if it’s not a major shootout. Reagan hasn’t scored fewer than 28 points, while Davie’s season low is 31.
Davie received super efforts from Parker Correll, Cameron Coleman and Ben Ellis and passed the non-league portion of its schedule with flying colors, but now it get serious.
A.L. Brown (2-2) at North Mecklenburg (1-3)
It’s a Mecka opener. It’s a must-win for the Wonders if they’re going to contend in the league. Actually, it’s probably a must-win if they’re going to have a winning season.
A.L. Brown’s defense has played well and the offense has big-play people, but it doesn’t look like an easy night. North Mecklenburg senior QB Nolan Beasley is starting for the third year, and A.L. Brown is 0-2 on the road.
North Meck’s win was against East Meck. The Vikings lost by a TD to a good Lake Norman team, lost to highly-ranked Independence, and lost 43-42 to Myers Park last week.
The Wonders beat the Vikings 30-14 in the first meeting of the schools.
Follow Mike London on Twitter at @mikelondonpost3.