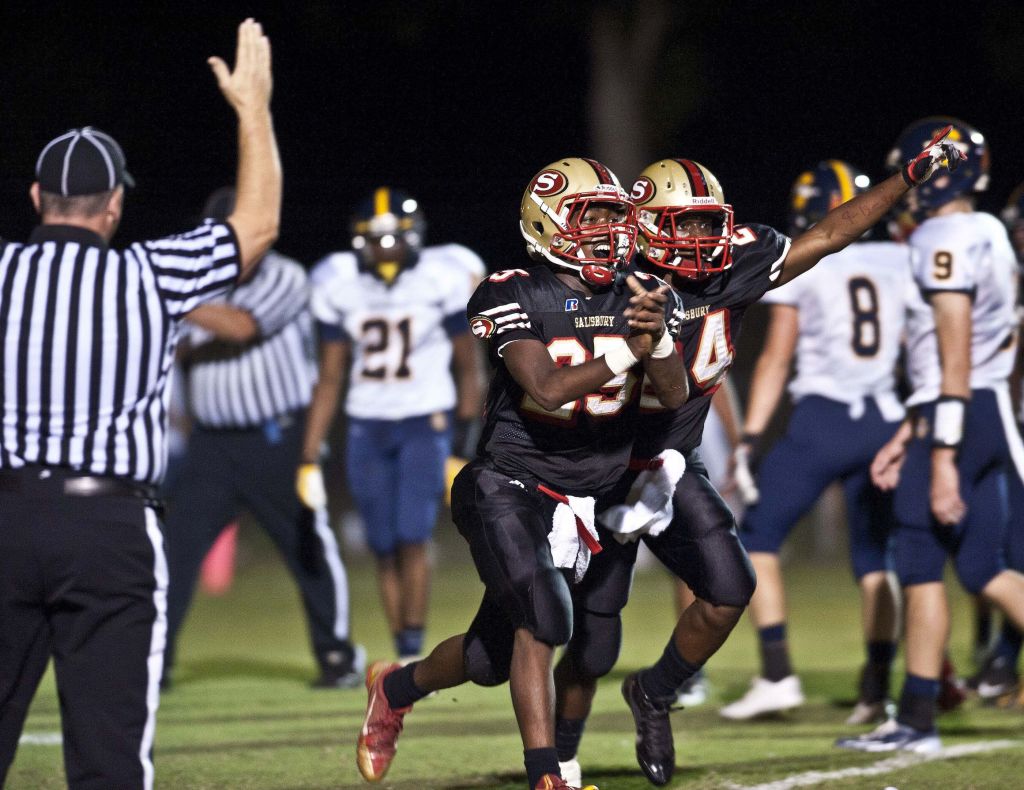 It was Friday when Salisbury finally played a game that could be branded Salisbury football. Although it didn’t feel that way when, on the first play of the game, quarterback Riley Myers fumbled the handoff on an isolation play.
“I just mishandled the ball on the handoff,” Myers said.
Head coach Ryan Crowder’s perspective was a bit darker than that when the Hornets could not execute a play that is the cornerstone of their offense.
“It wasn’t something that was a lot of tricky handoffs or a lot of motion,” he said. “It was just quarterback take the ball, hand the ball off. It was a very basic, simple concept. I’m like, ‘My god. We can’t run the basic thing. Maybe next time we’ll just take a knee on first down or punt the first time out. Maybe we can’t screw that up.’”
Screw ups cost the Hornets chances at being competitive in losses to East Rowan and West Rowan. In the opener against East Rowan, Salisbury fumbled the ball five times — losing three — while Myers threw two interceptions. Turnovers and penalties were the problem against Carson and West Rowan.
On Friday, Salisbury went three-and-out on the first series. South Iredell turned that into a 7-0 lead. A muffed punt by Shaquez Strickland inside the Salisbury 10 led to a touchdown run by South Iredell’s Jared Bradley and a 13-0 Vikings lead.
From then on, the Hornets were virtually mistake free.
They ran the ball effectively with Myers, Antwond Glenn and Willie Clark. There was a timely pass — a screen from Myers to Ryan Jones that went for 68 yards and a touchdown — at a key moment late in the game. The Hornets (1-4, 0-0 CCC) made mistakes, but none was a fatal blow. In the end, they did not beat themselves.
“It’s the game we should have been playing,” Myers said. “That’s how good we are. We’re actually a little better than that.
“If you take away some of the stuff we did, I think we can compete with every single 2A team in the state. It’s just these 3A and 4A teams we’re playing, it’s kind of tough competition. The fact is that’s what we should have done the first four games instead of taking to the fifth game to do it.”
After Friday’s game, Crowder said the Hornets did not find a way to beat itself like it had in the previous four games.
Salisbury scored 21 unanswered in the second quarter. It held an eight-point lead going into the fourth quarter. A 1-yard touchdown run by Myers on a bootleg and that 68-yard catch-and-run by Jones gave the Hornets their first win of the season.
“We just eliminated the boneheaded penalties and the turnovers,” Crowder said. “Nobody wants to go out and have turnovers. The outcome right there, when you eliminate penalties [and] you eliminate turnovers, you win football games. That’s just the way it always has been.”
In the week leading up to the game against South Iredell, there was film study and a focus on better execution. There was also a new attitude.
“We kind of preached all week. We had this thing about being a family and being together,” Myers said. “Before, we would play as an offense and a defense team and not a Salisbury High team. With us playing as one and a unit, it was a good feeling knowing this is what we can do and what we should be doing and what we’re going to strive to do the rest of the year.”
This win could allow the Hornets to salvage a good season after a dismal start.
Remember, the Hornets were beatdown by the Vikings last year in the fourth game. South Iredell scored 43 points in the first quarter, and the running clock was instituted at the start of the second. The Vikings took less than two hours to beat the Hornets 56-0. In conference play, Salisbury had a pair of one-point losses to East Davidson and Thomasville. Myers said if the loss to the Vikings was closer or the group was more battle tested after the first five games, the 2013 season could have been much better than 2-9.
It looks like good things are ahead for the Hornets. It looks like light is at the end of a tunnel that goes back to a fourth-round loss to South Iredell in the state semifinals of the 2012 N.C. High School Athletic Association 2AA playoffs.
The only thing the Hornets have to worry about this week, which is their bye week, is not reverting to old ways.
“We’re trying to not have a backslide from this past Friday and going back to making turnovers and committing penalties and just being able to progress forward,” Crowder said. “We don’t want to stand still. If you stand still, you’re getting passed.”
Follow Adam Houston on Twitter at @AdamRHouston.