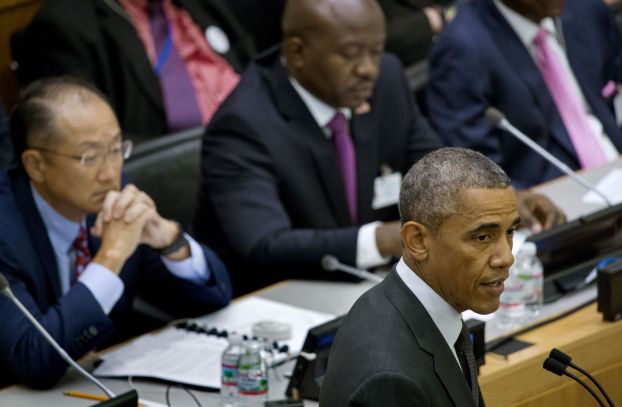 Obama urges world to do more to tackle Ebola

UNITED NATIONS (AP) — President Barack Obama, in a sober assessment of international efforts to stem a deadly Ebola outbreak, warned a high-level United Nations gathering Thursday that there is a “significant gap” between what’s been offered so far and what is actually needed to stem the health crises in West Africa.
The leaders of the hardest-hit nations also appealed for more help, with the president of Sierra Leone calling the Ebola virus “worse than terrorism.”
The emergency U.N. session on Ebola reflected the deep concern about an outbreak that has so far killed nearly 3,000 people. U.S. health officials have warned that the number of infected people could explode to at least 1.4 million by mid-January, though they have also cautioned that the totals could peak well below that if efforts to control the outbreak are ramped up.
Despite the grim warnings, Obama said international aid simply is not flowing into West Africa fast enough.
“The outbreak is such where at this point, more people will die,” Obama said as he closed out three days of diplomacy at the annual gathering of the U.N. General Assembly. “So this is not one where there should be a lot of wrangling and people waiting to see who else is doing what. Everybody has got to move fast in order for us to make a difference.”
On Thursday, top lawmakers in Congress also approved the use of leftover Afghanistan war money to begin funding Obama’s $1 billion request to help fight the outbreak.
Obama has come under criticism from some in West Africa for a slow response to the outbreak. He outlined a more robust plan last week, announcing that the U.S. would dispatch 3,000 U.S. troops to Liberia to set up facilities and form training teams to help with the response. The Pentagon mission will involve airlifting personnel, medical supplies and equipment, such as tents to house Ebola victims and isolate people exposed to the virus.
European Commission chief Jose Manuel Barroso announced Thursday that the European Union was increasing aid to tackle the outbreak by nearly $40 million.
The Ebola outbreak has hit Sierra Leone, Liberia and Guinea the hardest, leaving aid groups in the region have scrambled desperately for resources.
“Our 150-bed facility in Monrovia opens for just 30 minutes each morning. Only a few people are admitted, to fill beds made empty by those who died overnight,” the president of Doctors Without Borders, Joanne Liu, told the U.N. meeting.
As leaders from West Africa appealed for more help from the international community, they also cast the outbreak as far more than a health crisis.
Liberian President Ellen Johnson Sirleaf, addressing the conference via video, said the outbreak was far more than a health crisis, citing a “precipitous decline in economic activity” as well as the “loss of income and jobs” for people in her country.
President Ernest Bai Koroma of Sierra Leone, who also spoke on a video feed, said his country was facing “life and death challenges” that were worse than the threat of terrorism. His comments appeared to be a veiled reference to the degree to which the threat from Middle East extremists — most notably the Islamic State group in Iraq and Syria — has dominated the discussions at the U.N. this week.
Koroma took the dramatic step Thursday of sealing off districts where more than 1 million live in order to try to contain the outbreak.
While Obama touted the assistance the U.S. is providing, he said America alone cannot solve the problem and urged other nations to take similar action.
“We don’t have the capacity to do all of this by ourselves,” he said. “We don’t have enough health workers by ourselves. We can build the infrastructure and the architecture to get help in, but we’re going to need others to contribute.”
———
Associated Press writers Cara Anna and Edith Lederer at the United Nations contributed to this report.
———
Follow Julie Pace at http://twitter.com/jpaceDC