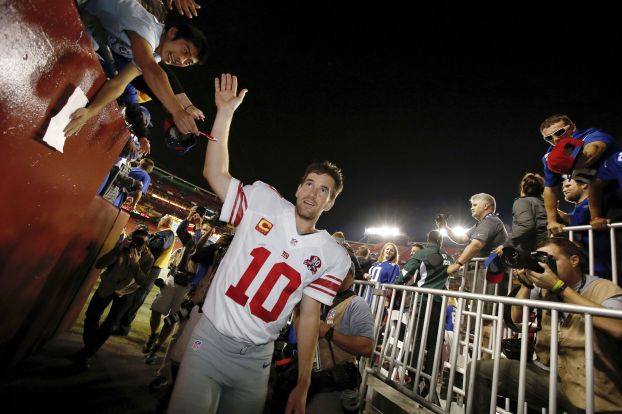 LANDOVER, Md. (AP) — Larry Donnell kicked his right leg high as he fell to the turf in the east end zone, then did the same with his left leg at the west end. Touchdown catches that mirrored each other.
And he still wasn’t done for the New York Giants.
The tight end has become Eli Manning’s top receiver, the perfect target in the team’s new dink-and-dunk offense. The second-year player who went undrafted out of Grambling State caught three scoring passes in the first half — similar twist-the-body grabs in the end zone of 5, 6 and 6 yards — in a 45-14 victory over the turnover-prone Washington Redskins on Thursday night.
After struggling in his first two games running new offensive coordinator Ben McAdoo’s West Coast playbook, Manning has led the Giants (2-2) to consecutive victories. Manning is supposed to complete 70 percent of his passes in this offense, and he surpassed that mark against the Redskins, going 28 for 39 — including three simple open-field drops — for 300 yards with four touchdowns and one interception.
Manning also ran for a 1-yard score, as did Andre Williams.
Donnell finished with seven catches for 54 yards. He had only one career touchdown catch entering the game, but he now leads the Giants this season in TD catches (4) and overall receptions (25). Daniel Fells had a 2-yard scoring catch in the third quarter, which means tight ends have snagged seven of Manning’s nine TD passes this season.
New York’s Victor Cruz added six catches for 108 yards, his second consecutive 100-yard game.
Kirk Cousins and his receivers weren’t anywhere near as efficient for the Redskins, who were undone by six turnovers that led to 31 points for the Giants. A strip-sack by Mathias Kiwanuka set up New York’s first touchdown, Trumaine McBride’s strip of tight end Logan Paulsen after a catch ended a Washington drive deep in New York territory, and Prince Amukamara, Quinten Demps, McBride and Antrel Rolle intercepted Cousins’ passes in the second half.
Demps was starting in place of Stevie Brown, who was benched during the Giants’ win over the Houston Texans on Sunday.
Cousins, who has the starting job while Robert Griffin III recovers from a dislocated ankle, finished 19 for 33 for 257 yards with four interceptions and a fumble for the first-year coach Jay Gruden’s Redskins (1-3), who dropped into the cellar in the NFC East, already 2 1/2 games behind the unbeaten Philadelphia Eagles. Cousins threw three interceptions in a span of five attempts in the second half.
Donnell beat a trio of defenders for his hat trick of touchdowns: linebacker Perry Riley, safety Brandon Meriweather and rookie cornerback Baushad Breeland. Breeland was starting for three-time Pro Bowl defensive back DeAngelo Hall, who ruptured his Achilles tendon in Sunday’s loss to the Eagles and is done for the season.
Donnell became the first Giants player with three touchdown catches in a half since Amani Toomer against the Indianapolis Colts in December 2002, according to STATS.
Redskins tight end Niles Paul left the game in the first half after a nasty helmet-to-helmet hit at the end of a 28-yard catch. Demps was called for hitting a defenseless player, while Paul stayed on the ground for a couple of minutes. He then walked with a wobble, with assistance on both sides, toward the locker room.
The Redskins also lost two-time Pro Bowl left tackle Trent Williams to a strained right knee in the second half.