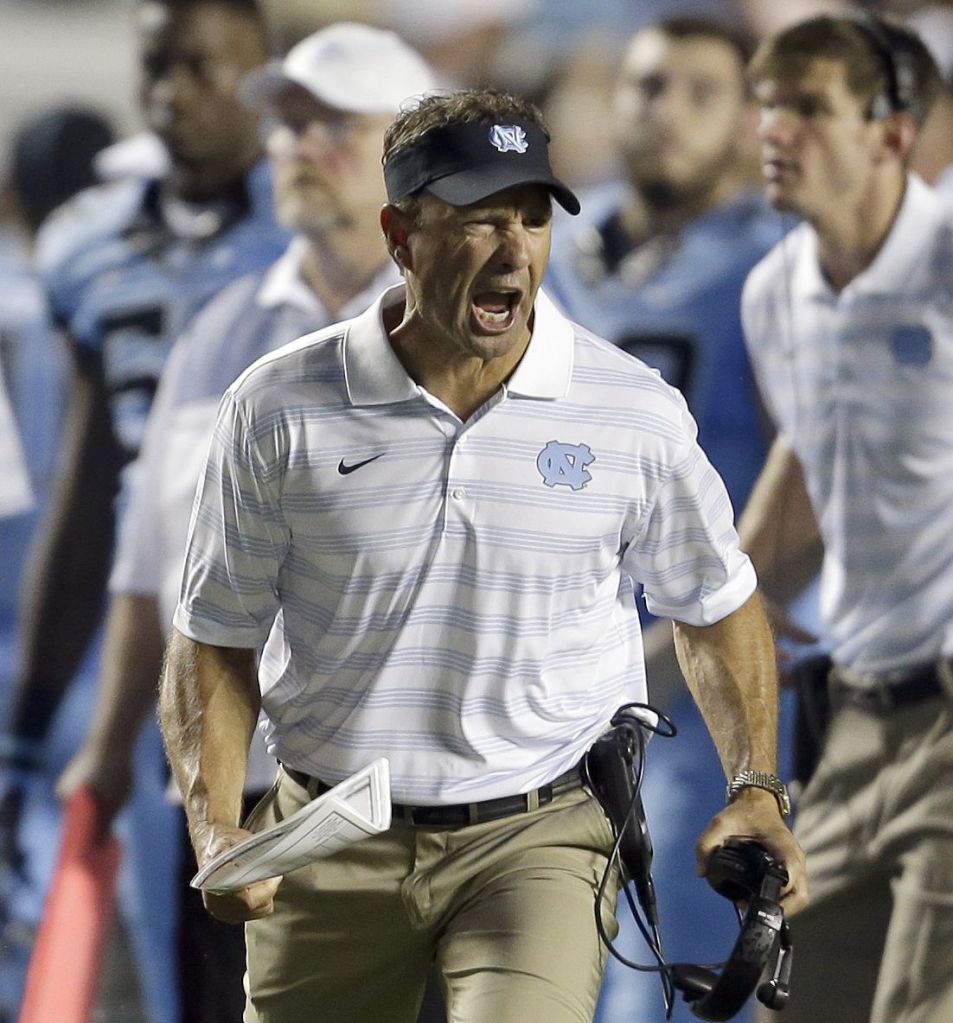 CHAPEL HILL, N.C. (AP) — Three games into the season, North Carolina’s defense is racking up big totals in all the wrong categories.
Missed tackles.
Blown assignments.
And a record number of points and yards allowed.
The Tar Heels gave up 70 points and 789 yards in last weekend’s loss at East Carolina. And other than a flurry of takeaways in the first two games, there hasn’t been much to feel good about heading into Saturday’s Atlantic Coast Conference opener at Clemson.
The coaching staff believes the problems are fixable.
“I think it’s something you can work on to try to get better,” associate head coach for defense Vic Koenning said. “So all we’re trying to do is do the best we can and try to get these guys a little bit better, and a little bit better, and try to improve.”
The Tar Heels (2-1) allowed the most points, yards and first downs in school history in the loss to the Pirates. While the numbers were program firsts, the problems that led to them were hardly new.
The Tar Heels repeatedly missed tackles, then didn’t have enough defenders near the ball to make up for it. Koenning said they didn’t stay in their gaps to clog openings near the line and took bad angles to the ball carrier.
And that came after a bye week in which the Tar Heels did extra tackling work after missing 34 tackles against San Diego State.
“There’s so many little things that tie into it,” Koenning said. “I guess it’s been a long time, since I probably was at Wyoming (from 1997-2002), that I had to try to coach all these little bitty details, where typically you’ve got guys that just do these things and it’s not something that you’ve got to try to fix every day. That’s just the way it is.”
The Tar Heels allowed four touchdowns of at least 25 yards at ECU, starting with a 55-yard pass a minute into the game. The ugliest moment may have been Breon Allen’s 44-yard scoring run on a third-and-28 handoff late in the first half.
Coach Larry Fedora left it up to each position coach whether to review game film and now must wait to learn how his team will respond against the Tigers (1-2, 0-1 ACC).
“We’ve been on the other side of that a couple of times, too,” Tigers coach Dabo Swinney said. “They’ll be eager to get out there and prove they’re better than that, no question.”
The Tar Heels rank last in the league and near the bottom of the national statistics in rushing defense (222.7 yards), total defense (548 yards) and scoring defense (42 points).
“There’s a lot of pressure, but it’s not coming from Twitter or whatever people are saying,” junior bandit Shakeel Rashad said. “It’s coming from within, from the team. We absolutely feel — we know — we can play better than we did.”
Still, the problems haven’t been confined to this year. UNC allowed 68 points in a home loss to Georgia Tech in 2012, then gave up 55 points at home to East Carolina last season. And Koenning has been brutally honest with reporters about his unit’s struggles during that time.
Fedora is relying on Koenning, who arrived with him before the 2012 season, to figure out how to get things turned around — and soon.
“He’s got a lot of pride,” Fedora said. “I promise you there’s nobody more disappointed than he was. He’ll do like everybody else: he’ll fight back and he’ll get it going. He’ll get it right.”
———
AP Sports Writer Pete Iacobelli in Columbia, South Carolina contributed to this report.
———
Follow Aaron Beard on Twitter at http://www.twitter.com/aaronbeardap