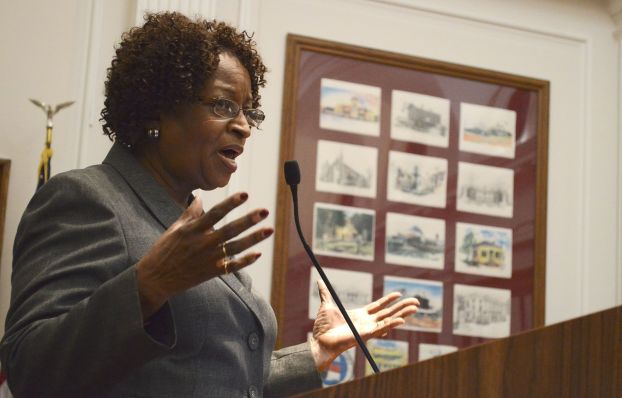 Rowan County candidates for political office preached to their choir on Thursday.
Three school board and two congressional candidates each spent a few minutes during the Rowan County Democratic Party’s Thursday meeting at the Rowan County Administrative Building to speak about important issues in each race and make a pitch for office.
The school board candidates were all incumbents — Jean Kennedy, Kay Wright Norman and Dr. Richard Miller. Though the school board candidates are non-partisan, meaning candidates aren’t affiliated with a party, Rowan County Democratic Party Chair Geoffrey Hoy said the party would be endorsing Kennedy, Norman, Miller and L.A. Overcash.
Each school board candidate’s speech included different issues, but a common theme included connections between education and economic development.
Kennedy, running for seat six, was up first. She stressed ties to Rowan County telling a story of how she stayed local when choosing a teaching career.
“I stayed in this county — the county where I wanted to be,” she said. “Yes, I could have been other places, but I wanted to be here in Rowan County.”
Norman — the current vice-chairman of the school board — spoke largely about progress that the current school board has made and positive trends within the Rowan-Salisbury School System, such as a declining drop-out rate and advanced technology.
“I represent every parent and every child in Rowan County,” she said. “Teachers must have the most up-to-date tools and training to teach today’s children, hence our digital conversion, where every child has equal access to information that is current and in their hands in addition to a great teacher,” she said.
Miller was the final school board candidate to speak. He talked about a number of issues, including the connection between education and economic growth.
“We have many doctors that want to come and work here at the hospital because it’s a good quality hospital, but they’re not sure that they want to live here,” he said. “We have to make sure we have an education system that attracts them to come live here.”
It’s not just the hospital, Miller said. He said several high-profile employees in major Rowan County industries choose to live elsewhere.
The two congressional candidates that spoke included Josh Brannon, who is running for North Carolina’s 5th Congressional District, and Antonio Blue, running for the 8th Congressional District.
Brannon focused primarily on his opponent’s large amount of campaign donations.
“We have to get money out of politics,” Brannon said. “Virginia Foxx is simply one of the worst examples of representatives who have simply been bought.”
Blue rounded out the night of speeches, focusing more on some of his political ideals and disclosing biographical information.
He said raising the minimum wage would significantly help low- and middle-income families.
“They may have more money,” Blue said about the upper class. “But we all have one vote.”
Contact reporter Josh Bergeron at 704-797-4246.

The Democratic Party of Rowan County has scheduled the following candidates for office to speak at their regular monthly meeting,... read more