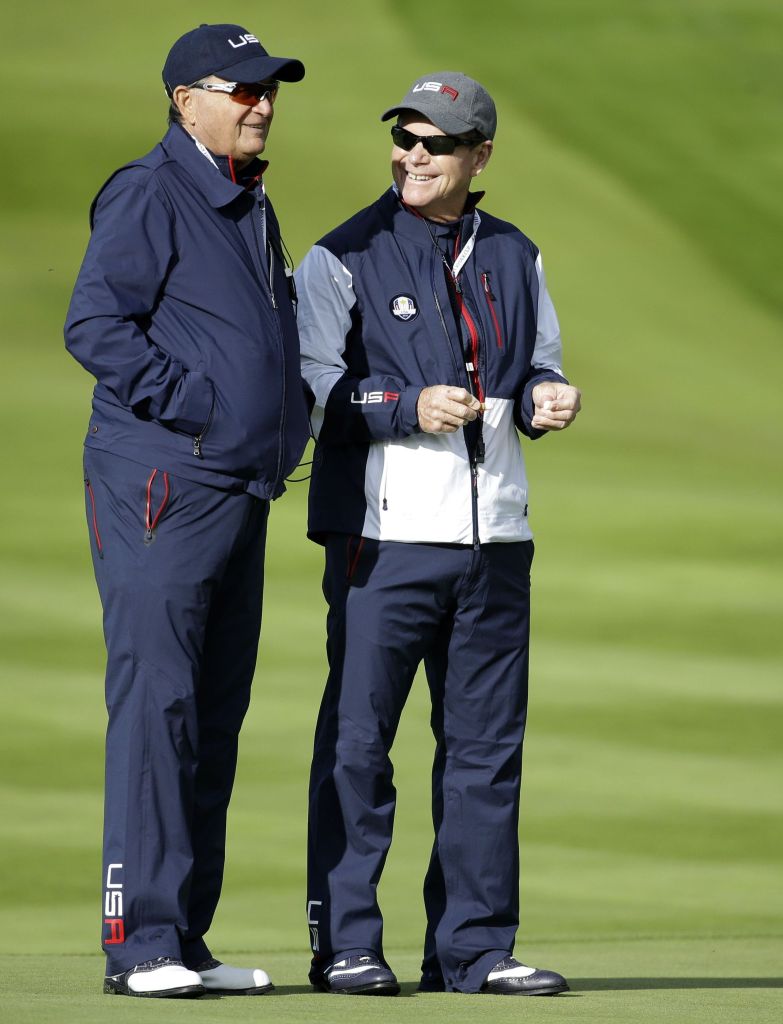 GLENEAGLES, Scotland (AP) — Phil Mickelson has played in the Ryder Cup more times than any American. His experience is such that recent captains have leaned on him for observations on everything from pairings to picks. That wasn’t the case with Tom Watson at the helm.
In the week leading up to Watson making his three wild-card picks, Mickelson was asked if the 65-year-old captain had reached out to him. The answer was no, without elaboration.
Then, as if to make a point, Mickelson reached into his pocket for his phone, glanced at it and replied, “Still no.”
Watson might not need any help to find a winning formula for the Ryder Cup. One reason the PGA of America took a chance on the oldest captain ever in the Ryder Cup was his history in the matches.
The Americans haven’t won on European soil since 1993, the last time Watson was the captain. He is adored in Scotland as much as any American golfer, having won the British Open four times on Scottish links. His three Senior British Open titles all were in Scotland.
In the four Ryder Cups that Watson played, only one was held in the United States.
One thing hasn’t changed. Watson approaches these matches with a singular focus.
“The European team is loaded,” Watson said. “But when the matches start at 7:35 on Friday morning, there’s going to be quality of play going on. We’ll just see who wins. I know our team is totally committed to bringing the cup back. I know that. And I’m going to do everything in my power to help them do that and set the stage for them.”
Even so, the generation gap creates a dynamic that brings an element of curiosity to this Ryder Cup. Only two players on his team — Mickelson and Jim Furyk — were playing on the PGA Tour when Watson won the last of his 39 titles in 1998.
Watson has not been at a Ryder Cup since he was captain, and he was slightly defensive Wednesday when asked a series of questions about whether that might hurt him.
“No,” he said flatly. “Because I’ve played in the Ryder Cup four times, and I’ve been a captain once. That’s experience.”
He also doesn’t buy into the notion that he can’t relate to a new generation of players, nine of whom were not even born when he won the first of his eight majors.
“I’ve answered that question before,” Watson said. “They know I’ve played in the Ryder Cup. They understand I’ve been a captain. And they know that I know what they’re doing. They have respect for me and I have the ultimate respect for them. We’re on the same page. We’re professional golfers. Doesn’t matter how old you are or how young you are.”
He certainly has the respect of European captain Paul McGinley, who referred to Watson as his “boyhood hero.” McGinley went to college in San Diego and worked on a practice range when the PGA Tour came to town. McGinley used to ask his friends to cover for him when Watson played a practice round so he could watch.
As a captain?
“I haven’t really been paying attention,” McGinley said. “In regards to what Tom is doing with the team, I don’t even know what groups he’s going out with. I just know he’s going to make some good decisions and he’s going to have a strong American team out there and we are going to be prepared for that.”
McGinley talks of a template that Europe has had for years.
The Americans have no such thing. They have won the Ryder Cup only twice since Watson last was captain — Brookline in 1999 when Justin Leonard made the “putt heard ‘round the world,” and 2008 with Paul Azinger at the helm at Valhalla.
Watson already raised questions with his picks, stating that he wanted the hot hands and then passing over Chris Kirk, who had won the Deutsche Bank Championship the day before the captain’s picks were chosen.
Will it matter who plays? Does it matter who is the captain?
“Bottom line is he’s a professional golfer with a resume that is awfully deep,” Zach Johnson said. “He’s got a lot of sage advice and wisdom that I think we can certainly dig into and maybe learn from. And then you compound that with the fact that we’re playing a country that he’s had some success in — to put it mildly — I think it’s terrific.”
Mickelson was asked how his own experience could help the Ryder Cup rookies, and he quickly deferred.
“I’ll try to do or say whatever I can,” Mickelson said. “But it’s captain Watson’s team. He’s the leader. It’s been 21 years since the last time we won on foreign soil and the last time it happened, he was the leader. It was also the last year before I started making the teams. So I’m very honored that I have the opportunity to play with him, play for him, and learn from him.”
And now, the Americans will find out if they can win under him again.