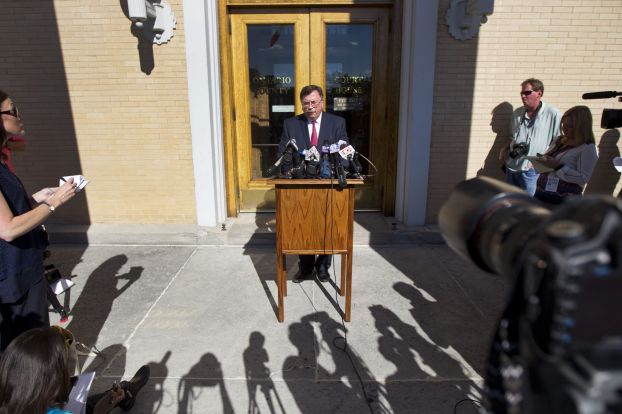 Stewart will not face charges in deadly crash

CANANDAIGUA, N.Y. (AP) — Three-time NASCAR champion Tony Stewart will not be charged with the death of a fellow driver at a sprint car race in upstate New York, prosecutors said Wednesday in disclosing for the first time that the victim had enough marijuana in his system the night he died to impair his judgment.
Ontario County District Attorney Michael Tantillo said a grand jury decided against charging Stewart with either second-degree manslaughter or criminally negligent homicide in the Aug. 9 death of Kevin Ward Jr., who was struck and killed as he walked down the track in an apparent attempt to confront the NASCAR veteran after their cars got tangled up one lap earlier.
“There is toxicology evidence in the case relating to Kevin Ward that indicates that at the time of operation he was under the influence of marijuana,” Tantillo said. “The levels determined were enough to impair judgment.”
Tantillo also said two videos — one from a fan, the other from the tiny track in this New York hamlet, had been examined and enhanced. Both showed Stewart did not do anything wrong and that there was no “aberrational driving.”
The decision came nearly seven weeks after Stewart’s car struck and killed Ward, sending shock waves through the top racing series in the United States. The brash and popular NASCAR driver known as “Smoke” spent three weeks in seclusion following what he called a tragic accident before quietly returning to the Sprint Cup circuit.
“This has been the toughest and most emotional experience of my life, and it will stay with me forever,” Stewart said in a prepared statement. “While much of the attention has been on me, it’s important to remember a young man lost his life. Kevin Ward Jr.’s family and friends will always be in my thoughts and prayers.”
A call placed to the Ward family’s home went unanswered.
The grand jurors “were not considering whether anybody else was at fault,” Tantillo said. “However, I am sure from their deliberations and discussions that the fact that Kevin Ward was observed running basically down two thirds of the track, into a hot track, into the middle of other cars that were racing, played a big, big factor in their decision.”
Sheriff Philip Povero spent weeks investigating, several times saying he did not have evidence to suggest Stewart meant to harm the other driver. Ward had spun while racing alongside Stewart and then the 20-year-old climbed out of his car and walked down the track, waving his arms in an apparent attempt to confront the 43-year-old NASCAR veteran.
Authorities said the first car to pass Ward had to swerve to miss hitting him. The front of Stewart’s car appeared to clear Ward, but Ward was struck by the right rear tire and hurtled through the air. He died of blunt force trauma.
Stewart’s peers were protective of him as questions emerged in the aftermath of the crash, and it pained them that Stewart was grieving in private and had cut off communication with so many of them. They welcomed him back in Atlanta, and fans gave him a robust cheer, too.
NASCAR spokesman Brett Jewkes said there were “no winners” in the accident and expressed support for Ward’s family and Stewart.
After Ward’s death, NASCAR announced a rule that prohibits drivers from climbing out of a crashed or disabled vehicle — unless it is on fire — until safety personnel arrive.
There have been very few criminal prosecutions stemming from incidents that occur during competition and research by The Associated Press dating to 2003 turned up no cases in which a driver was charged for his role in an on-track incident.
Stewart, who is from Columbus, Indiana, has long been one of the most proficient drivers in racing, winning in every kind of series, from sprint cars to the elite Sprint Cup Series. He has for years taken part in little races in nondescript towns because he loves the thrill of the high horsepower, lightweight cars skidding around the dirt.
He rarely made his schedule public.

In 2003, NASCAR driver Jimmy Spencer was under investigation for assault after punching Kurt Busch in the face following a race at Michigan, but Busch asked for his complaint to be dropped.
Legal experts believe the case against Stewart would have been very difficult to prove.
“Death happens in a very dangerous sport, and this was driver vs. driver and Ward stepped on the track,” said David Weinstein, a former state and federal prosecutor in Miami who is now in private practice. “The only person who really knows what happened is Tony Stewart, and it’s impossible for a prosecutor to get inside his head.”
———
Fryer reported from Charlotte, North Carolina. Researcher Rhonda Shafner in New York contributed to this report.