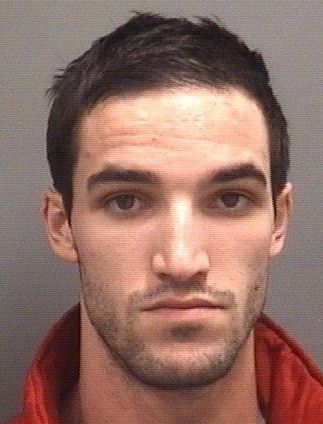 A Salisbury man was arrested Wednesday after allegedly breaking into multiple apartments and pawning stolen objects.
Salisbury Police arrested Colton Kyle Edward Hensley, 26, 300 N Fulton St, Salisbury, on charges of breaking and entering, larceny and five counts of obtaining property by false pretenses. Jail records showed he remained in jail Thursday on a $60,000 bond.
Salisbury Police spokesperson Capt. Shelia Lingle said Hensley was sub-leasing an apartment at Prince Charles Condos, when he allegedly broke into neighboring apartments and stole a bevy of items, such as jewelry, iPads and electronic equipment.
Hensley had allegedly sold the stolen items to multiple pawn shops around the county, Lingle said.
Lingle said the police department first learned of Hensley’s actions when a victim called after noticing that some of his possessions were missing.
The thefts were allegedly fairly widespread, involving multiple victims and Lingle said more charges would likely be coming — at least five.
Hensley had allegedly been stealing and pawning items since July and reportedly continued pawning merchandise until a couple days ago, Lingle said.
She advised Salisbury residents to keep accurate track of their belongings, by writing down all serial numbers for appliances, electronic equipment or any other belongings in one, central location.
According to N.C. Department of Corrections, Hensley is on probation for a conviction of felony gun theft.