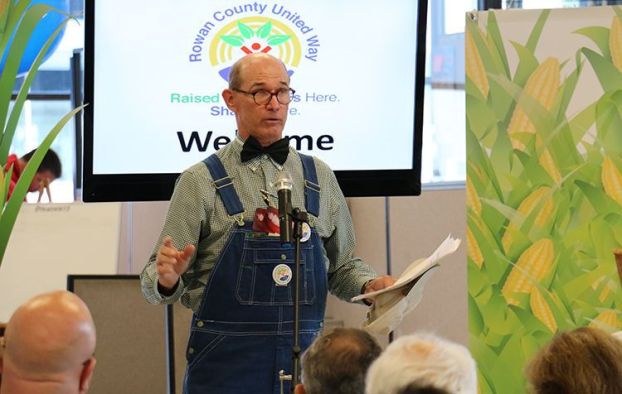 Susan Barnhardt, administrative assistant and John Struzick, plant manager with Innospec, had a great reason to be excited at Wednesday’s Rowan United Way campaign report meeting.
Their company has already exceeded its company goal by over 30 percent and their campaign isn’t complete, they told a group of United Way supporters.
Struzick said that everyone at Innospec is, as Bianca says, “On Fire for the United Way Campaign” this year and are going to push their campaign further over the top.
The company was just one of dozens of successful fundraising efforts toward this year’s $1.879 million goal. The first campaign totals show the money raised so far comes to $369,359.29, or 19.6 percent of the campaign goal.
Jeannie Sherrill of Families First, reporting for the Professionals Division announced that the United Way Agencies had already raised $29,154.76 or 97 percent of their goal, and still had numerous agencies still to report.
“The Agencies are very committed to reaching their goal and exceeding it because they know the overall goal is more than last year,” said Sherrill.
Also reporting with increases were Power Curbers with $8,687.00, a 3 percent increase, and Global Contact Services reporting a 13 percent increase with $6,216.00.
The money raised through the campaign supports 15 agencies, many of whom were represented at the report meeting held at Ben Mynatt Nissan. Every two weeks, a report meeting is held at a different location where individuals report on the goals up to that point and discuss their campaigns.
Campaign Chairman Greg Dunn asked the supporters at the report meeting to reach out to all businesses and individuals who may have not have joined the campaign and share all the great things that the various United Way Agencies do for Rowan County.
“Everybody should be able to share an experience they have had through one of the agencies” he said.
This year’s theme is “Raised Here. Stays Here. Shared Here.” It is all about sharing experiences one has had with an agency with everyone.
At the end of each meeting, three names will be chosen from anyone who donates at least $52 to the campaign. The names are placed in a drawing of 12 finalists who will be in the running to win a car from one of four automotive dealers — Ben Mynatt Nissan, Gerry Wood Auto Group, Cloninger Ford, Toyota, Scion and Team Chevrolet.
The three names chosen Wednesday were Sean Ingram of Freightliner, Nancy Goodnight of Millbridge Elementary and Rachel Mobley of Family Crisis Council.
The 2014-2015 campaign totals thus far are:
• Presidents — $54,865.22, or 12.2 percent of goal
• Chairmans — $37,681.50, or 13.5 percent
• Industrial 1 — $178, or 0.3 percent
• Industrial 2 — $29,036.36, or 56.2 percent
• Commercial 1 — $12,100.80, or 20.9 percent
• Commercial 2 — $36,353.12, or 35.9 percent
• Commercial 3 — $19,997.51, or 23.0 percent
• Public Employees — $29,781.17, or 20.3 percent
• Education — $18,273.44, or 10.3 percent
• Community Business — $912, or 6.1 percent
• Special Gifts — $64,273, or 41.4 percent
• Professionals — $29,154.76, or 27.0 percent
• Miscellaneous — $36,815.41, or 39.3 percent
The next report meeting will be held at noon Oct. 9 at Gerry Wood Auto Group.