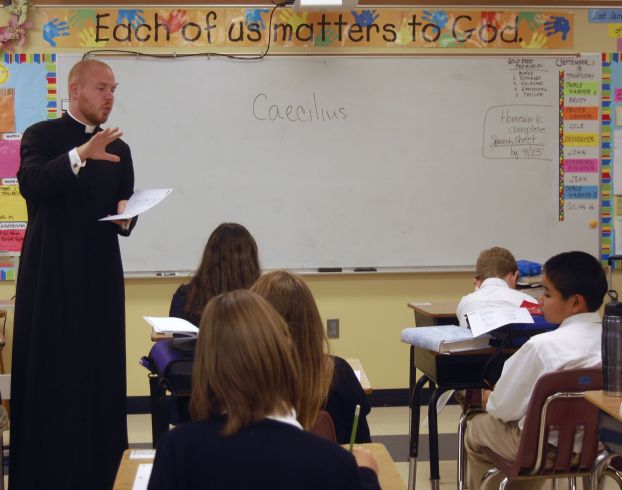 Priests teach with actions and words

The Rev. John Eckert and the Rev. Noah Carter might be new to the Sacred Heart community, but they’re already fitting right in at the parish’s school.
Eckert helps teach religion classes, while Carter teaches middle school Latin. Both priests also eat lunch with the students and attend athletic events.
Eckert, Sacred Heart’s pastor, has been at the parish since July 8.
He grew up in Illinois and attended a Catholic school all the way through high school. He went to St. Louis University, where he earned a bachelor’s degree in political science and communications in 2004.
“By the end, it was pretty apparent I needed to give seminary a try,” he said.
He spent six years at the Pontifical College Josephinum in Columbus, Ohio. The first two years were devoted to earning his bachelor’s degree in philosophy. The following four years, he worked on his master’s of divinity, also called a baccalaureate in sacred theology, from the Roman System. He graduated in 2010.
While he was studying, his parents moved to Charlotte, and he decided to move to North Carolina to be closer to them.
His first position as a priest was as a parochial vicar at a parish in Greensboro. Much like Sacred Heart, the parish had a school on its campus.
“It was really good to be involved with both,” he said.
In 2012, he became the pastor at a slightly smaller church with no school in Tryon. He led children’s Bible classes on Wednesday nights in addition to leading the church, until his move to Sacred Heart in July.
Carter and Eckert attended the Pontifical College Josephinum at the same time, but Carter was an undergraduate student during Eckert’s time as a graduate student.
Carter, a graduate of Henderson High School, received his bachelor’s degree in philosophy from the Pontifical College Josephinum in 2010, and then went to Rome for his graduate studies.
“It is very cool,” Carter said.
He studied at the Pontifical University of the Holy Cross, where he received his baccalaureate in general theological studies. He began post graduate work toward a concentration degree in liturgical studies.
He was ordained June 28, and the need arose for him to stay in the United States, and he began working at Sacred Heart.
He is the parish’s parochial vicar, which, as he described it, is a “fancy word for associate pastor.”
“Father Eckert has the direct care for the whole parish,” he explained. “He directs me to do what he needs.”
The two split the church’s masses, visit the sick or homebound, help with the school and are involved in adult education classes.
“Education in the faith is one of the tasks we’re asked to take on,” Eckert said.
“Having a school makes a parish campus very lively,” he added, saying that he enjoys watching students begin to learn about their world, faith and history.
“You can’t beat listening to little ones singing hymns,” Carter said.
“It’s beautiful. It’s one of my favorite things,” Eckert added.
Their involvement with the school includes teaching, spiritual development for the staff, building relationships with the students and discipline from time to time.
“We make sure the students and the staff are well taken care of,” Eckert said.
Carter said that includes “just getting to know them” or “having lunch with them.”
Eckert especially enjoys cheering on students at the school’s athletic events.
“I really enjoy it because a huge fan of the sports teams,” Eckert said. “That’s a blast.”
The two also guide in-service spiritual training, to help faculty members grow in their faith.
“When we grow together in the faith, the kids see that,” Carter said.
He added that the smaller, community aspect of Sacred Heart allows the staff to keep each other accountable and better meet student needs.
“Students don’t get lost,” he said.
Having a school on the parish campus is “life giving,” Eckert said, explaining that often the work of a priest can be emotional and draining.
“After about 50 high fives, you feel better,” he said.
Contact education reporter Jeanie Groh at 704-797-4222.